The two tea party favorites rallied together in Minnesota, and guess what? They're big fans of each other 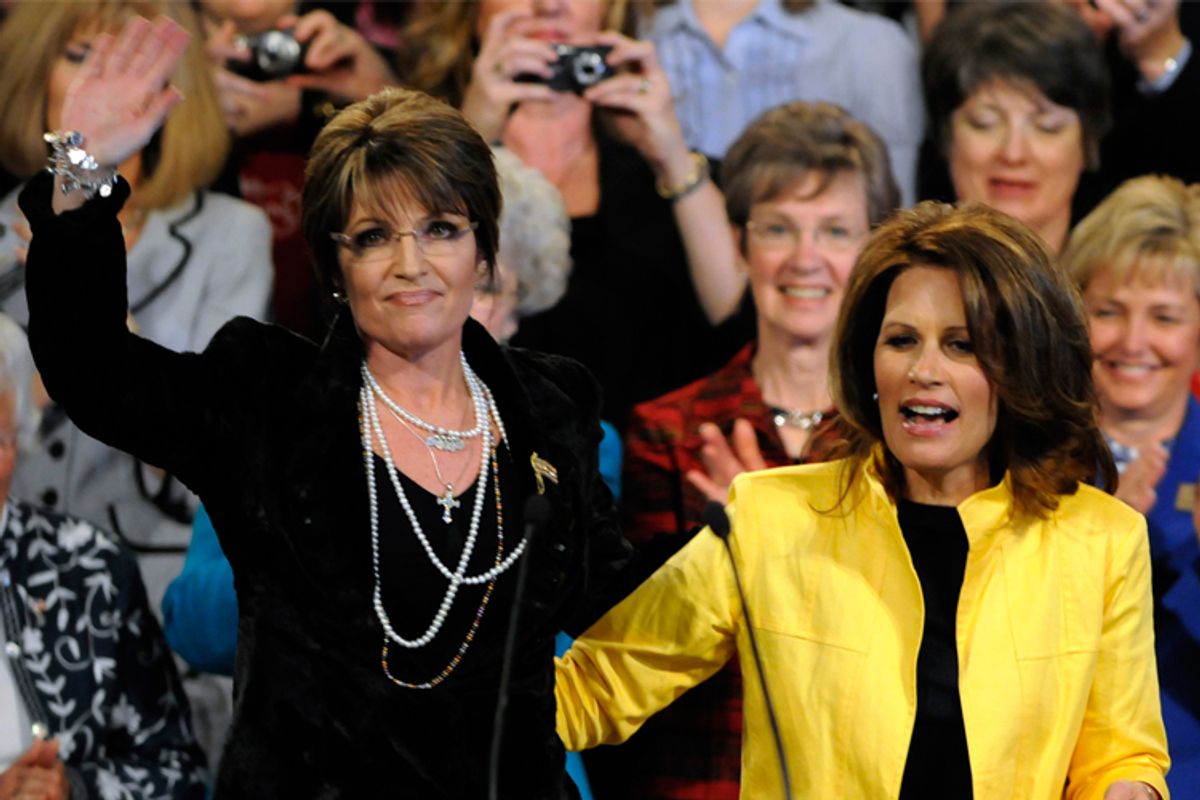 Sarah Palin waves to the crowd after a campaign appearance in Minneapolis for Rep. Michele Bachmann, R-Minn., on Wednesday. (AP Photo/Jim Mone)
--

As world-changing summit meetings go, the big Sarah Palin/Michele Bachmann rally in Minneapolis Wednesday didn't quite rise to the level of "King Kong vs. Godzilla." But the moment the two favorite red-meat throwing tea party heroines got together could still go down in political history.

"I knew that we'd be buddies when I met her when she said, 'Drill here, drill now,'" Palin said. "And then I replied, 'Drill baby drill,' and then we both said, 'You betcha!'"

It was an afternoon of barbed lines directed at President Obama and designed to rev up the party faithful. Introduced by Gov. Tim Pawlenty (who was all too happy to hitchhike on board the Palin/Bachmann Express), Bachmann went first. "I think I heard someone say repeal," she said. "You better believe it, baby. Repeal is what this girl is going to be all about after November!" (Presumably, another re- word -- "reelection" -- will be keeping her busy until then.) "Two years from now, President Obama will be a one-term president," Bachmann continued. "Because we are going to elect the boldest, strongest, most courageous, rock-ribbed constitutional conservative president this country's ever seen! We're there!"

And then things got a little weird. "As absolutely drop-dead gorgeous as this woman is on the outside, I am here to testify she is 20 times more beautiful on the inside," Bachmann said. Suddenly, the rally wasn't just a fundraiser for Bachmann; it was a demonstration of the GOP's strange version of feminist solidarity. Palin started out by thanking all the tea party groups for helping rebel against Obama's reign. And the tea party leaders? "We're finding out most of 'em are women," she said. "Yeah! Some surveys show that."

Palin riffed for a few minutes on how she and Bachmann were both the kind of strong, independent women the country needs as leaders -- though she tried not to sound too serious about it, apparently realizing that kind of talk wasn't entirely on message. "I'm just kidding about this gender thing, I'm just joshing about this gender thing," she said. "Gender's no issue. Neither is the color of one's skin, that's not a measuring thing either. It's character -- and Michele has this." And then she said 2010 was going to be the year that "conservative women get together and take back this country."

The rest of the program was your standard-issue Palin (or Bachmann) stump speech: from Bachmann, rambling World War II stories intended to inspire patriotic nostalgia for the good old days when Americans didn't elect godless Communists; from Palin, self-aggrandizing tales of fighting back against government spending ("As governor, I vetoed some of Obama's stimulus funds, and my veto was overridden by a Republican legislature"). Palin said too many politicians think they're spending free money: "They're becoming addicted to opium -- OPM, Other People's Money. There is an addiction there!"

But for all the over the top crazy lines, there was something about the tableau Bachmann's operation put together that looked different from the usual scenes of Republican leaders back in Washington: everyone standing on the stage behind the speakers was a woman, as were the two main headliners. (True, most of them were white, but hey, it was an event for Republicans in Minnesota; diversity couldn't have been that easy to come by.) For a few moments, you could think back to the heady days of early September 2008, when the world first met Palin, and remember that the polls all swung wildly for her and John McCain for a few weeks, and that cable news was filled with woman-on-the-street interviews with voters who said something about Palin just clicked with them. And you could almost start to worry that Bachmann and Palin would, if they teamed up, produce some alchemy that would propel them forward into ever greater political power.

But then, of course, reality intruded again. "The Republicans have been getting criticized lately with this mistaken concept that they're the party of 'no,' that we're the party of 'no,'" Palin said. "And we're saying, what's wrong with being the party of no? When you consider what Obama and Pelosi and Reid are trying to do to our country -- so be it." That's not exactly the kind of rhetoric that helps reach out to independent voters. So be it, indeed.