People are often caught smoking in the bathroom. But this time, smoker looked Arab. Plus: Charging for carry-ons? 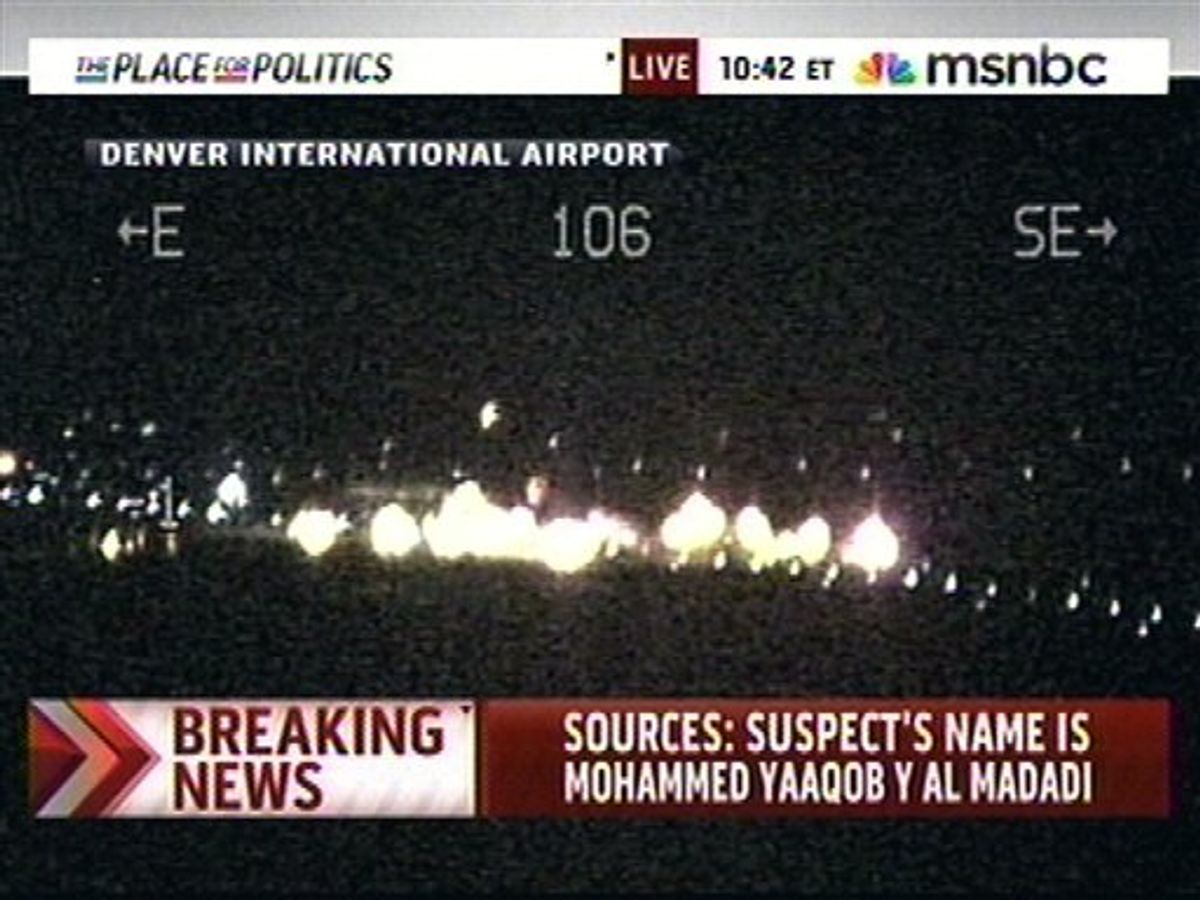 In this image taken from MSNBC video on Wednesday April 7, 2010, shows authorities responding to a plane disturbance on United Flight 663 at the Denver International Airport. The FBI is probing whether a man tried to ignite his shoes on a DC to Denver flight Wednesday, according to law enforcement officials, who say the man is a Qatari diplomat. (AP Photo/MSNBC) (AP)
--

Yawn. Haven't we seen this a hundred times in the past nine years? Or, more correctly, haven't we seen it 2,500 times? That's the approximate number of times since 2001 that military fighters have been scrambled to intercept passenger airliners because of reported suspicious behavior. Lavatories are a common theme. In 2006, a Delta flight made an emergency landing in San Antonio, Texas, because -- brace yourselves -- a passenger spent an unusual amount of time in the lavatory. According to flight attendants, the bathroom’s ceiling panels had been moved and the smoke detector tampered with. The man, a resident of San Antonio, was detained and questioned -- including a physical search of his home -- before the FBI pronounced him "not suspicious at all." That same day, an American Airlines flight from Dallas to Miami made an emergency stop in Tampa, Fla., after the cabin crew discovered two lavatories with locked doors -- and apparently nobody inside them. Police and TSA officials unlocked the doors and found the bathrooms ... empty.

Truth be told, passengers are caught smoking in lavatories all the time. It happens quite a bit, especially on long-haul international flights. Doing so is very illegal, not to mention dangerous, but 99 times in a hundred the reaction is measured, appropriate. Perhaps it's different, however, when the culprit is one of those people commonly described as "Middle-Eastern looking"? Though in fairness to the crew, Mr. Mohammed Al-Madadi did himself no favor by cracking a tasteless and provocative wisecrack when queried about his activities in the john. He told them he was trying to light his shoes on fire -- a reference to the 2001 would-be shoe bomber, Richard Reid. What a knee- slapper. He's lucky the on-board air marshals didn't chain him to the floor.

There's not much more I can say. The incident speaks for itself.

Let's move on, shall we?

Maybe you caught this? Fort Lauderdale, Fla.-based Spirit Airlines has announced that starting in August it will begin charging up to $45 for carry-on bags.

À la carte airfare pricing has become very popular of late. The airlines call it "unbundling." Conceptually it's not a terrible idea -- the parsing of airfares into optional nuggets -- 10 bucks for a window seat, 15 for an aisle, 7 for a turkey wrap, $20 for a take-home fleece blanket and hypoallergenic pillow. The practice inevitably leaves some fliers feeling nickel-and-dimed, but it's a smart strategy in that those looking for perks can have them, absorbing a higher share of increased fares. Is it not better to charge a premium for specific items, not all of which everybody wants, rather than raise prices even further across the board?

But unbundling should only be taken so far, and this pushes the concept to the edge of the envelope. Beyond it, frankly. It goes against the spirit, pardon the pun, of unbundling. Let's be realisitic, the problem here is that a carry-on bag is not an optional item. It's not a perk or an "extra" that fliers can pay for at their choosing. Look at how many people out there fly only with luggage that can fit beneath a seat. It's no more an option than wearing a seatbelt is an option. Will the carrier begin charging for those too?

"The overhead bins have become really crowded and it can delay boarding and deplaning," said Genevieve Shaw Brown, senior editor at Travelocity.com, speaking to Business Week magazine. "Besides making money, Spirit seems to be trying to find a balance between people checking versus carrying on bags. It'll probably entice people to check more bags."

Except that Spirit already charges for checked luggage, leaving passengers without a choice. Either way, they're going to pay. What kind of incentive is that? That's gouging.

Let's hope this idea stays in the lower tiers of the industry, where it belongs. No offense to the people who work there, but how to say this ... Spirit Airlines ain't exactly Singapore or Qatar Airways. It ain't even United. You could call it the poor man's Southwest. We don't expect much, service-wise, from carriers in these echelons, and thus they're allowed to play faster and looser with fares and fees. Others might not be so successful, and I suspect that legacy carriers follow suit at considerable peril. Should they too begin charging for carry-ons, we'll see anti-airline sentiment ratcheted up to unprecedented levels.

On that note -- and his might be a bad idea -- how about a list of the best and worst ideas in airline marketing history? I'll leave the latter to you, and there are plenty to choose from. As for the best, I'll tell you my own pick: Northwest's decision, over 20 years ago, to become the globe's first major carrier to impose a systemwide in-flight smoking ban.

And lastly, speaking of Spirit Airlines ... I fly mostly international these days, which tends to be pretty civilized, but a few weeks ago I found myself in South Florida, at the Spirit Airlines terminal. I have to ask, having been out of the domestic loop for some time: Is this the state of flying in the United States? I'd never experienced anything quite like it. It was like a humanity bomb went off. The lobby was elbow-to-elbow with the ugliest, loudest, most unbearable people I have ever seen -- guys in gold chains screaming at each other; trashy women tottering around on silver high-heels clutching knockoff designer bags; teenagers sleeping on the floor; gigantic suitcases and baby carriages everywhere. The din of crying babies was unbearable, the security lines endless.