Fiddling with China's yuan while the U.S. burns 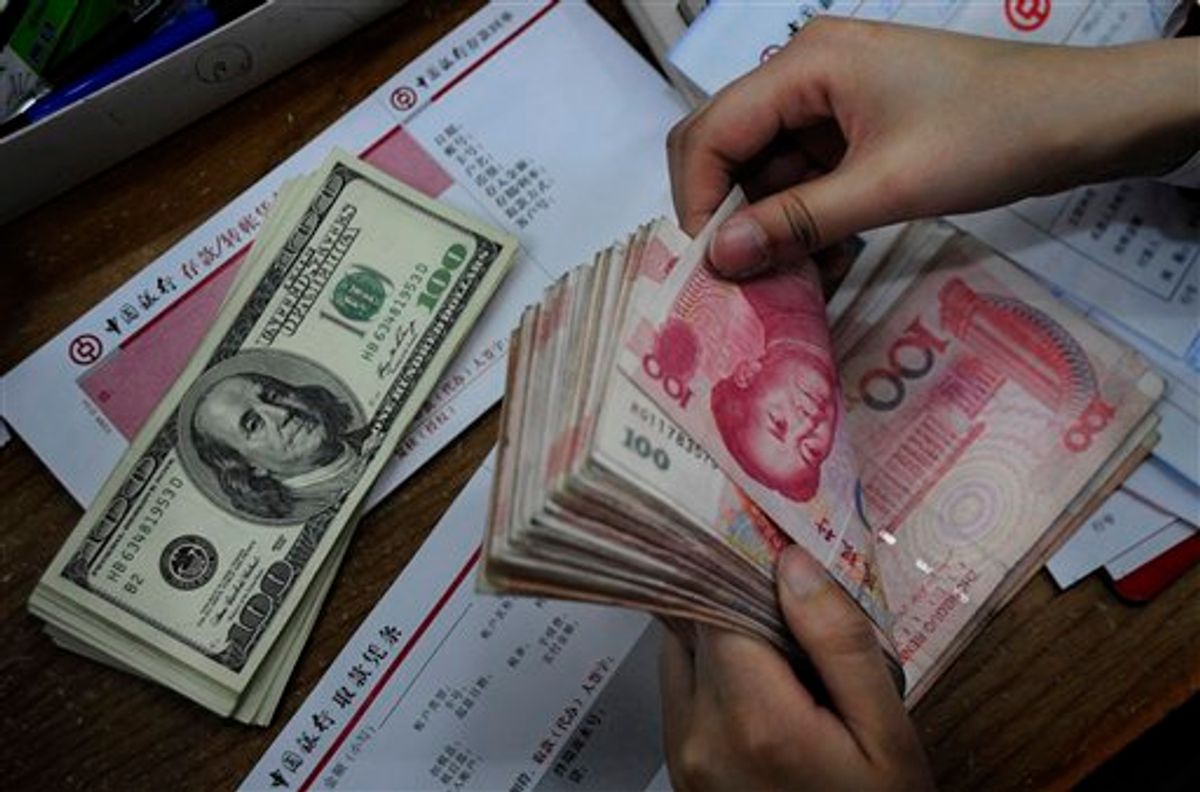 In this photo taken Tuesday, April 6, 2010, a bank clerk counts Chinese banknotes next to U.S. dollars on the counter at a bank in Hefei, in central China's Anhui province. U.S. Treasury Secretary Timothy Geithner is expected to press Beijing over its currency controls when he meets Vice Premier Wang Qishan in a sign the two sides are stepping up efforts to narrow their differences in the dispute. (AP Photo) ** CHINA OUT ** (AP)
--

From the How the World Works archives:

On Tuesday, China's premier, Hu Jintao, arrived in the United States, en route to a summit meeting with President Bush. One of the likely areas of their conversation: pressure on China to upwardly revalue the yuan. U.S. politicians and many economists have long argued that China's exchange rate undervalues the yuan by 15 to 40 percent, making its products relatively cheap and contributing to the vast trade deficit that the United States runs with China.

On Wednesday, Bloomberg reported that China's yuan experienced the biggest one-day rise in value since its initial revaluation last year.

The date of that post: April 19, 2006. Now, almost exactly four years later, Premier Hu's arrival back in the U.S. to attend President Obama's nuclear summit is imminent, and, surprise, surprise, The New York Times reports, "The Chinese government is preparing to announce in coming days that it will allow its currency to strengthen slightly and vary more from day to day."

Deja vu all over again. If the past is any guide, China won't revalue the yuan nearly as much as its most strident critics demand, but will manage a gradual float upwards that minimizes disruption to China's domestic economy and will be just enough to ward off Congressional action in the U.S., or an official designation by the Treasury Department as a "currency manipulator." Between 2005-2008, China allowed the yuan to rise about 18 percent against the U.S. dollar, before the global financial crisis and a consequent export trade collapse forced a change in policy. Already, just today, reports Jane Macartney in Times Online, the yuan rose to "6.8235 against the dollar, its highest since October 2009."

Just exactly how much China's currency manipulation is responsible for U.S. trade deficits or is holding back global economic growth has been a topic of intense debate among economists. Even people who tend to speak with one mind on just about everything else, like Joseph Stiglitz and Paul Krugman, disagree sharply on whether or not it is time to "get tough" on China. (Krugman, yes, Stiglitz, no). How the World Works has steered clear of the debate during this latest go round, in part because I figured that at some point China would decide it was safe to start allowing the yuan to appreciate again, and the issue would go away.

But even if China makes an aggressive upward revaluation of the yuan, I don't think it's going to make that big a difference in the trade figures. For one thing, if Wal-Mart decides that its Chinese suppliers are getting too pricey because of currency appreciation, it will just start sourcing goods in Vietnam or Indonesia or India or some other nation eager to leverage its cheap labor for a slice of the export pie. But more importantly, I think we may be fighting yesterday's battles.

For example, four years ago, I might have been writing about whether the yuan should appreciate or not with a nod to exactly the same terms of argument that are currently framing the debate, but I most certainly wasn't writing about a Chinese offer to build high-speed trains in California.

Keith Bradsher puts the symbolism up front and center:

Nearly 150 years after American railroads brought in thousands of Chinese laborers to build rail lines across the West, China is poised once again to play a role in American rail construction. But this time, it would be an entirely different role: supplying the technology, equipment and engineers to build high-speed rail lines.

China isn't just willing to build a high speed rail line between San Francisco and Los Angeles, it's also ready to help finance the railroad's construction! While the U.S. spent the last few years wallowing in an orgy of bad credit and setting off a global financial conflagration, China was laying down thousands of miles of high speed railroad track and perfecting the art of building ultra-modern trains. I don't consider myself a blind nationalist, but I do find it a bit humiliating to be offered the same paternalistic helping hand that China gives to countries like Zambia or Niger.

I'm not saying China's currency manipulation isn't a factor in global trade and current account imbalances -- it most certainly is. But if instead of running up huge budget deficits because we didn't make arrangements to pay for our wars and prescription drug benefits and tax cuts and stimulus programs and bailouts, we had been watching our Wall Street money  men a little more closely while simultaneously pouring government investment into education and technological research and development and public transportation infrastructure, we might have ended up feeling a little less vulnerable now to the steps taken by other countries in pursuit of their own mercantilist interests.