The Pigford case: Justice for black farmers on hold 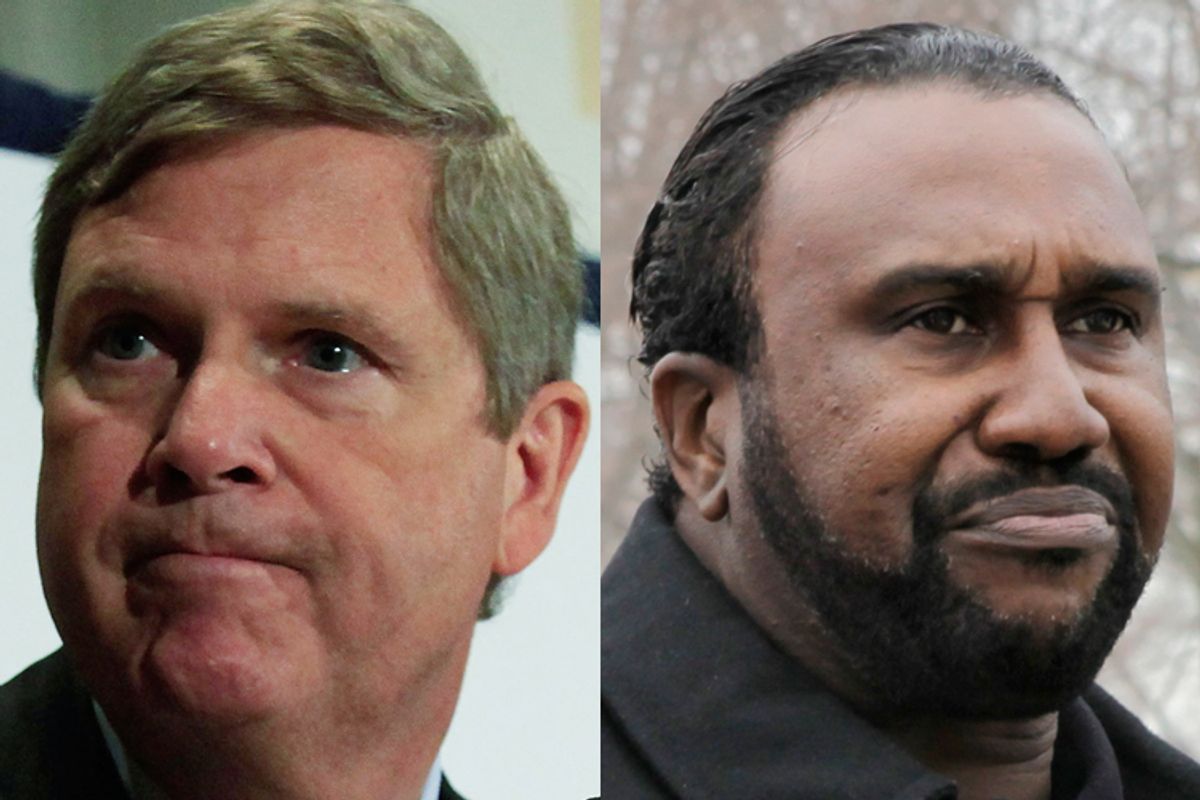 Virginia farmer John Boyd describes a scene from a painful past: a white U.S. Department of Agriculture loan officer only allows black farmers to apply for loans one day a week. "Black Wednesday," the farmers call it, and they line up outside the USDA office in Richmond, Va. The loan officer, James Garnett, leaves the door to his office open so that all the farmers in the hallway can hear the loan requests of their colleagues be summarily, and vehemently, denied.

But Black Wednesday was not an artifact of the '50s. This was the America of the '80s and '90s, and in 1994, the USDA itself commissioned a review of the treatment of minorities in its Farm Service Agency programs. The commission's study found that "minorities received less than their fair share of USDA money for crop payments, disaster payments, and loans."

The result was a massive class-action lawsuit, Pigford v. Glickman, which the USDA settled out of court in 1999, admitting to widespread racial discrimination against black farmers in its loan programs between 1981 and 1996. About 15,000 farmers were paid a total of more than $900 million in the settlement. But tens of thousands of farmers filed claims after the deadline, and many charged that the government's outreach had been insufficient, causing them to miss their opportunity.

In February 2010, President Obama and Secretary of Agriculture Tom Vilsack promised an additional $1.15 billion to cover the remaining claims, but the story doesn't end there. The settlement agreement mandated that Congress appropriate the funds by March 31 of this year. The deadline came and went with no action by Congress, and so the future of the settlement remains in limbo.

After years of Black Wednesdays, John Boyd founded the National Black Farmers Association, spearheading both the original lawsuit and the effort to reopen the Pigford case in order to allow the claims of the farmers who missed the deadline. Salon spoke with Boyd about the history of the lawsuit and what the missed deadline means for farmers.

What happened between you and the USDA loan officer in Richmond?

Mr. Garnett had made 147 farm loans in Mecklenburg County, Va. Only one of those loans was to a black farmer, and he was the minority advisor to the USDA county committee. When they investigated Mr. Garnett, they asked him, "Do you have a problem making black farm loans?" Guess what he said? He said yes. He said yes, I think that they're lazy, and they're just looking for a paycheck every Friday.

Mr. Garnett took my loan application and tore it up and threw it in the trash can while I was sitting there in front of him. And he said he wasn't going to lend me any of his money. When I asked him why he wasn't going to make the loan, he said, "Well, I don't have any money now. If you want to come back again next year, that's up to you, but I think you need to go ahead and just sell your farm. I've got a farmer, Mr. Blaylock, and you can milk cows on his farm. I think that would be the best opportunity for you and your family."

I was mad. I was looking for a $10,000 operating loan to plant my crop. After nine years in a row I'd only gotten one loan from the USDA farm services, and I would apply every year.

When the investigator asked him, "Did you spit chewing tobacco on John Boyd's shirt?" He said, "Well, yeah." He claimed he accidentally missed his spit can.

What was the result of the investigation?

In my case, they found Mr. Garnett guilty of discrimination. But they didn't terminate him. They allowed him to move to the sister county, which is Greensville County, Va., and they let him retire after two months in Greensville. He didn't see anything wrong with that.

This is a federal agency, admitting to racial discrimination in the very recent past. Why do you think more people aren't getting angry about this?

Hispanics have had problems, Native Americans, women -- they all have problems with the USDA and its lending programs.

[Native American farmers filed a lawsuit, known as Keepseagle, alleging discrimination against the USDA in 1999. The case is currently unresolved. -- Ed.]

How can the disparity be so extreme?

Very few black farmers take part in U.S. farm subsidy programs. We have these programs that we should be participating in, and we're not. I think it has to do with outreach, and a lot of it has to do with the "good old boys" system that remains in place. This is a system that needs to be revamped. That's part of what our original lawsuit was about.

What is the history of the current claim and the $1.15 billion settlement?

Eighty thousand farmers filed claims after the deadline. You know, they didn't know about it.

It took from 2000 to 2009 to get the case reopened. I spent eight years on [Capitol] Hill, getting the measure in place.

But Congress missed the March 31 deadline to appropriate funds. What does this mean for the farmers?

We're going to miss another planting season, so that means more black farmers out of business.

The government announced the settlement like it was all over. They didn't announce the settlement like there was another step that still had to be done. The farmers that read these articles around the country were thinking that they had money on the way. We've hired an additional phone bank to take all of these calls that are coming in about the cases.

I'm just hoping that the administration is going to help us get this done. The president is going to have to get involved. [Vilsack] released a statement saying that he was still committed, but the question is, committed at what level?

A billion dollars is not going to happen by itself. Let's be real here. The administration is going to have to push it. The same way [Obama] was out there fighting for healthcare, he's going to have to stand up with me and help us get this done. You can't just go out there and say, "Hey, I did my part. It's in the budget, it's done." The budget is like the president's wish list. If you want to turn that into a reality, you've got to put a little elbow grease in there.

I'm so tired of going to funerals and saying, "He died before he saw his settlement." I look at these families and say, "I'm sorry that your daddy didn't see the justice while he was living, but maybe you will."