Bob McDonnell's Civil War -- and ours

Ignoring slavery is an argument for racial inequality, and sorry or not, conservatives are still fighting for that 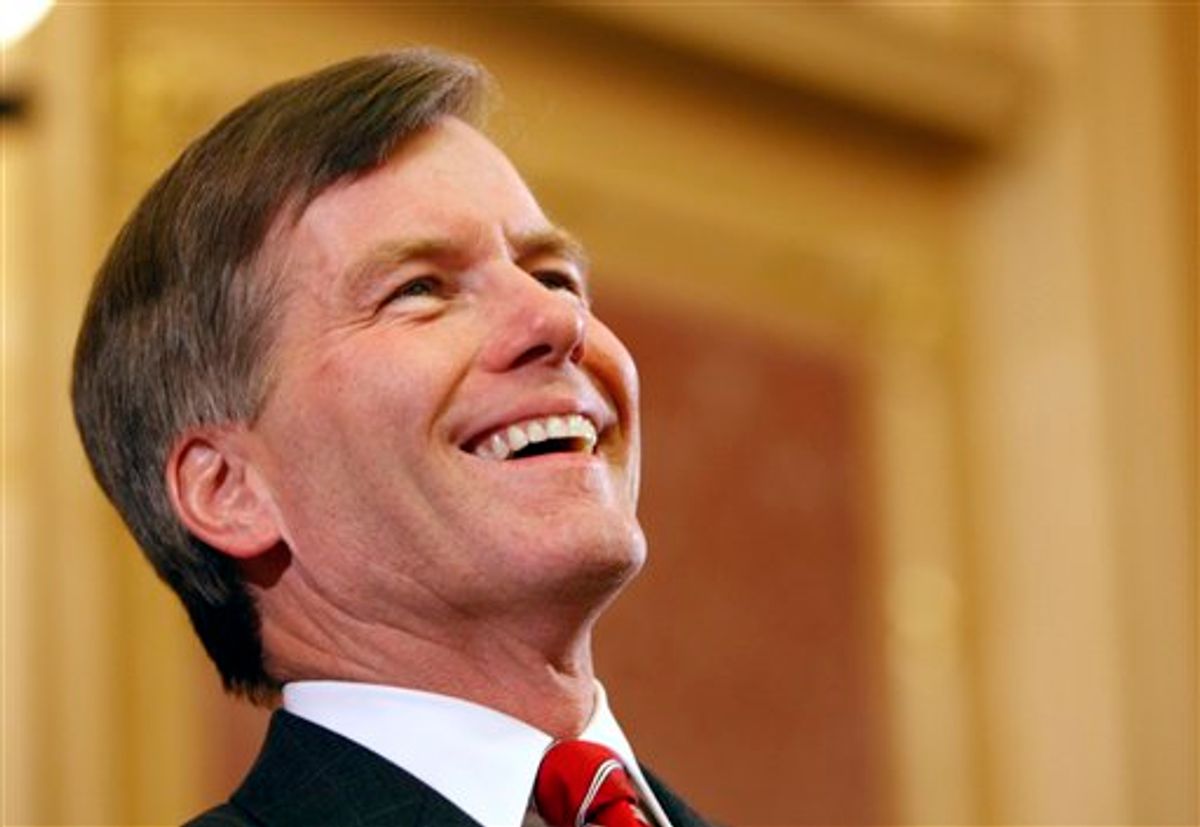 Virginia Gov. Bob McDonnell delivers his State of the Commonwealth Address before a joint session of the Virginia General Assembly in the House chambers at the Capitol in Richmond, Va., Monday, Jan. 18, 2010. (AP Photo/Bob Brown, Pool) (AP)
--

It's nice that Virginia Gov. Bob McDonnell has apologized for omitting any mention of slavery in his proclamation of "Confederate History Month." Apologizing is better than not apologizing.

But this isn't forgetting to turn off the lights. It's not really the kind of thing for which you can smack yourself on the forehead and say, "Man, I am so sorry I forgot about that." The proclamation didn't just fall out by accident, or happen automatically. The last two governors, both Democrats, made a point of not proclaiming a Confederate History Month. And even the Republicans before them had made some acknowledgment of the evils of slavery, even amid their celebration of slavery's defenders. McDonnell was consciously reversing both policies.

Moreover, somebody actually asked him, after the controversy broke, why he'd skipped over slavery in urging citizens to "understand the sacrifices of the Confederate leaders, soldiers and citizens during the period of the Civil War." The governor replied, "There were any number of aspects to that conflict between the states. Obviously, it involved slavery. It involved other issues. But I focused on the ones I thought were most significant for Virginia."

This is the point where a hundred amateur Civil War buffs always jump up and start offering their pet theories about the origins of the conflict. So let's be clear, and wave them off now. Any attempt to downplay the role of slavery in the origins of the Civil War is historically uninformed at best, and white supremacist revisionism at worst. To imply that slavery was not "significant for Virginia" begs the question of just who, exactly, counts as Virginia.

A very, very abbreviated history lesson: Virginia's origins as the seedbed of American liberty are the same as its origins as the birthplace of slavery. Freedom was possible for poor white people exactly because black people were made into property. You can't imagine antebellum Virginia -- or, for that matter, antebellum America -- without slavery, and by 1860, one-third of the state’s population was enslaved. Nor is the significance of the Civil War separable from slavery and emancipation. Slavery's why it started, and the end of slavery is what gives the war its most profound meaning. The conflict looms so large in our memory because, when slaves claimed their freedom, they were engaging in revolution on a scale that makes that other Virginian, George Washington, look downright small-time.

Of course, when you think of "Virginia," you probably think of the state on the map, and the people who live in it. That's not really what McDonnell was talking about. What his proclamation celebrates is more like Ol’ Virginny -- the political entity in which African-Americans were not only not citizens, but legally speaking, not people.

All of this isn't to say that McDonnell wants to repeal the 13th Amendment and bring back human bondage. That'd be absurd, and his apology makes that clear. "The abomination of slavery divided our nation, deprived people of their God-given inalienable rights, and led to the Civil War. Slavery was an evil, vicious and inhumane practice which degraded human beings to property, and it has left a stain on the soul of this state and nation."

For McDonnell’s most trenchant critic in this whole thing, Ta-Nehisi Coates, that's a satisfying answer. Coates wrote of McDonnell and his ilk on Tuesday,

But he's willing to accept McDonnell’s apology. Yesterday, Coates wrote, "I think I can speak for my folks, when I say the vast majority of us long to be done with this business. I think, and so dearly hope, that we're headed that way. And I think that McDonnell made a small, but incredibly important, step to getting us closer."

This is a nice idea, that we can address the endurance of white supremacy by extracting apologies from politicians who take it a step too far. It's certainly worth appreciating, given that even an apology and an admission of the importance of slavery are more than is normally forthcoming from Southern white conservatives.

But, while we’re arguing about history here, we're also arguing about power and wealth. Minimizing slavery is an implicit argument for inequality, another way of saying that everything's fine now, because nothing was ever really that bad. In fact, McDonnell even does some of this in his apology.

Our history is perhaps best encapsulated in a fact I noted in my Inaugural Address in January: The state that served as the Capitol of the Confederacy was also the first in the nation to elect an African-American governor, my friend, L. Douglas Wilder. America's history has been written in Virginia. We cannot avoid our past; instead we must demand that it be discussed with civility and responsibility.

Coates talks about his desire, and the desire of black people in general, to "be done with this business." But in his first comment, before the apology, he pointed out how we still have a de facto party of white supremacy in this country.

Whether its members think of themselves that way isn’t really the point. People never really consider themselves racist; they just organize themselves to defend racial inequality. Inequality is a possession for its beneficiaries -- an investment. And just because a one-term governor was forced to admit that slavery was indeed significant and evil doesn't mean he and his allies are dumping their stock.