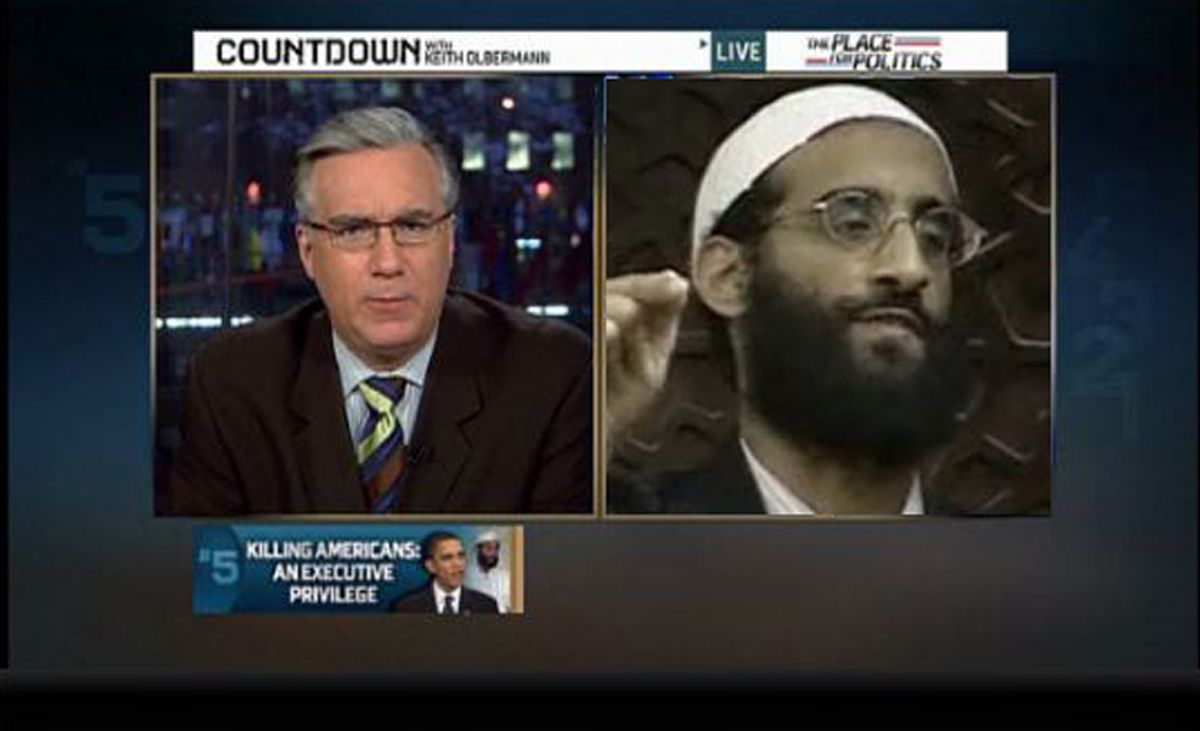 There are many legitimate criticisms voiced about Keith Olbermann, but he deserves substantial credit for his coverage last night of a story that is as self-evidently significant as it is under-covered:   Barack Obama's assassination program aimed at American citizens.  He not only led off his show with this story, but devoted the first two segments to it, and made many of the key observations and asked virtually all of the right questions.  The videos of those two segments, worth watching, are below.

What's most striking to me about all of this is that -- as I noted yesterday (and as Olbermann stressed) -- George Bush's decision merely to eavesdrop on American citizens without oversight, or to detain without due process Americans such as Jose Padilla and Yaser Hamdi, provoked years of vehement, vocal and intense complaints from Democrats and progressives.  All of that was disparaged as Bush claiming the powers of a King, a vicious attack on the Constitution, a violation of Our Values, the trampling on the Rule of Law.  Yet here you have Barack Obama not merely eavesdropping on or detaining Americans without oversight, but ordering them killed with no oversight and no due process of any kind.  And the reaction among leading Democrats and progressives is largely non-existent, which is why Olbermann's extensive coverage of it is important.   Just imagine what the reaction would have been among progressive editorial pages, liberal opinion-makers and Democratic politicians if this story had been about George Bush and Dick Cheney targeting American citizens for due-process-free and oversight-less CIA assassinations.

Republicans are not going to object to any of this.  With rare exception, they believe in unlimited executive authority and denial of due process.  They see Obama's adoption of the core Bush/Cheney approach as a vindication of what they did for eight years (and also see it, not unreasonably, as proof that progressive complaints about Bush's "shredding of the Constitution" were not genuine but rather opportunistic, cynical and motivated by desire for partisan gain).  As a result, even the most Obama-hating right-wing extremists will praise him and cheer for what he's doing.  At the same time, the people who spent eight years screaming about things like this (when Bush/Cheney were doing them) are now mostly silent if not finding ways to justify and defend it (we don't need due process because the President said this is an American-Hating Terrorist).  As White House servant Richard Wolffe said in the second Olbermann segment below (and Wolffe's commentary was actually fairly good), the White House is "very proud" of its presidential assassination program, which is likely why they decided to leak it to the NYT and the WP yesterday.

Here again, we see one of the principal and longest-lasting effects of the Obama presidency:  to put a pretty, eloquent, progressive face on what (until quite recently) was ostensibly considered by a large segment of the citizenry to be tyrannical right-wing extremism (e.g., indefinite detention, military commissions, "state secrets" used to block judicial review, an endless and always-expanding "War on Terror," immunity for war criminals, rampant corporatism -- and now unchecked presidential assassinations of American citizens), and thus to transform what were once bitter, partisan controversies into harmonious, bipartisan consensus:

UPDATE:  Here's the segment I did yesterday on Al Jazeera -- along with The Weekly Standard's Bill Roggio and GWU Professor of Media and International Affairs Steven Livingston -- regarding the WikiLeaks/Iraq video:

UPDATE II:  The American Prospect's Adam Serwer has an interesting post reporting that civil rights groups have issued a joint letter opposing the closing of Guantanamo if it means -- as the Obama administration has suggested -- that Guantanamo and its defining injustices will simply be re-located to U.S. soil.  As part of his reporting, Serwer writes this:

[B]road assertions of executive power haven't even been limited to the last administration. Instead, we've seen the powers of the president expand, with the Obama administration asserting the right to assassinate American citizens without any due process or finding of guilt whatsoever.

From a civil libertarian point of view, we're in a much worse place than we were during the Bush administration, when Democrats were willing to oppose Bush's expansive claims of executive authority. Now we have only muted criticism from Democratic legislators and hysterical cries from Republicans that Obama isn't going far enough.

As far as I'm concerned, that's the point that cannot be stressed enough.  And it's particularly good to see its being highlighted in a liberal publication like the Prospect (though Serwer has been pointing out such things there for quite some time).