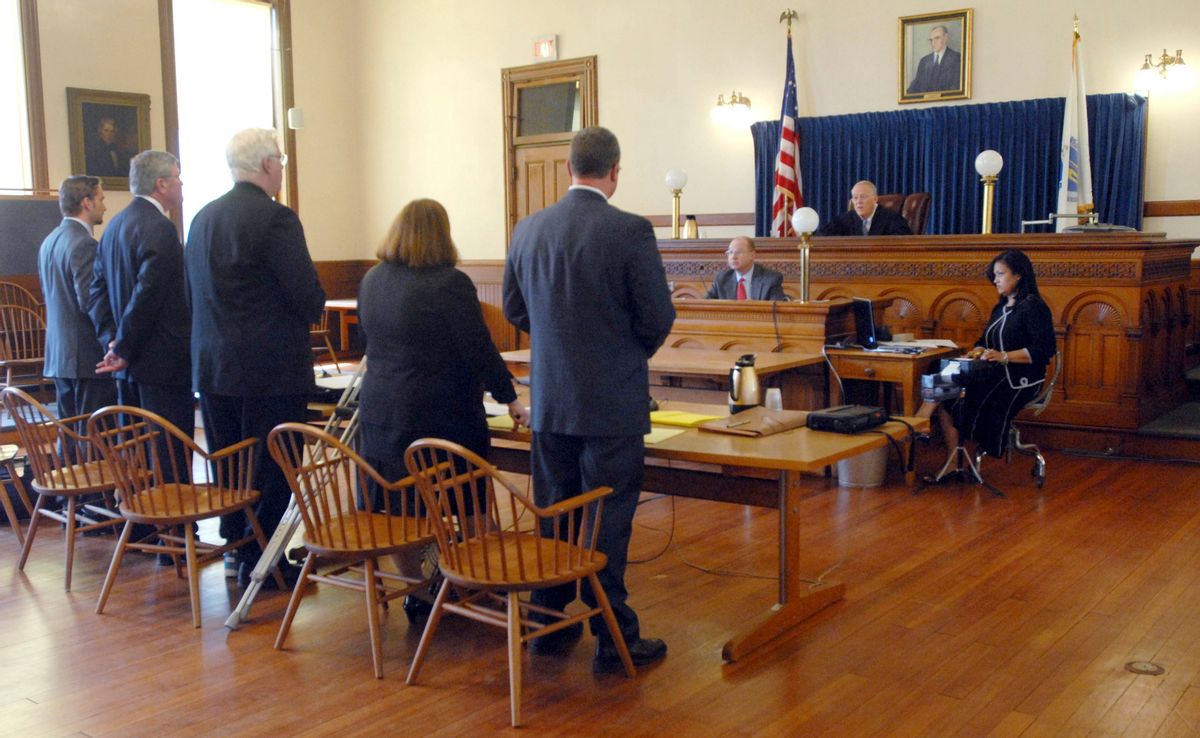 Judge Judd J. Carhart, right, presides IN Hampshire Superior Court over the arraignment of three Massachusetts teenagers, who waived their rights to appear yet pleaded not guilty through their lawyers, left, Tuesday, April 6, 2010, in Northampton, Mass.. The teens are among several charged in the bullying of Phoebe Prince, 15, who committed suicide in January after what prosecutors call months of threats and harassment. (AP Photo/Carol Lollis, Pool) (Carol Lollis)
--

Three teenage girls accused of relentlessly bullying 15-year-old Phoebe Prince until she committed suicide entered not guilty pleas Thursday, but they have already been found guilty in the court of cyberspace. Anonymous trolls have taken it upon themselves to dole out punishment through a connected series of Web sites (since taken down) created for each of the four girls charged in connection with the case -- Ashley Longe, Sharon Chanon Velazquez and Flannery Mullins, all 16, and 17-year-old Kayla Narey. (The anonymous webmaster behind the sites explains that the two boys accused in the case, Sean Mulveyhill and Austin Reynaud, are excluded because "we cannot post text calling theim [sic] RAPISTS until they are convicted and found guilty.")

The sites feature photos of the teens, links to news coverage of the case and thriving message boards that host violent rape imagery, degrading sexual commentary, attacks on their appearance, name-calling ("whore" and "slut," are favorites) and appeals for the girls to kill themselves just like Prince did (one visitor offered to supply a rope). Some have even taken to posting the teenagers' home addresses and links to their MySpace pages.

It shouldn't come as any surprise that the message boards are rife with the sort of putrid missives fit for bathroom walls -- we are talking about the Internet, after all. The comments range from "I want to show [her] my erect penis" to "this cunt needs to be raped by 10,000 guys who all have AIDS" to remarks that are so beyond the pale, including several referring to molestation by one girl's dead father, they don't belong in even a relatively permissive publication like Salon. Then there is the more run-of-the-mill ragging on looks: You look like a horse, a dude -- et cetera, et cetera. A girl's sexuality is simply the most powerful target there is, which was apparently no secret to the accused bullies, who allegedly called Prince an "Irish slut."

The message board dwellers see no irony in attacking these teenagers for bullying: They're just giving them a taste of their own medicine, you see! It is true that what goes around comes around -- but it keeps on coming around, again and again and again. As a rare sane commenter put it: "What if you drive one of these teens to suicide? Then that is on you."

Update: Well, that was quick. The sites now redirect to the following message: "Attorneys have advised us to remove the site to prevent lawsuits. As much as we'd like the world to know about this horrible case and to spead the word, we must bring the site to an end."