After yet another bad week, the RNC chairman still seems safe. Even former foe Katon Dawson rules out a challenge 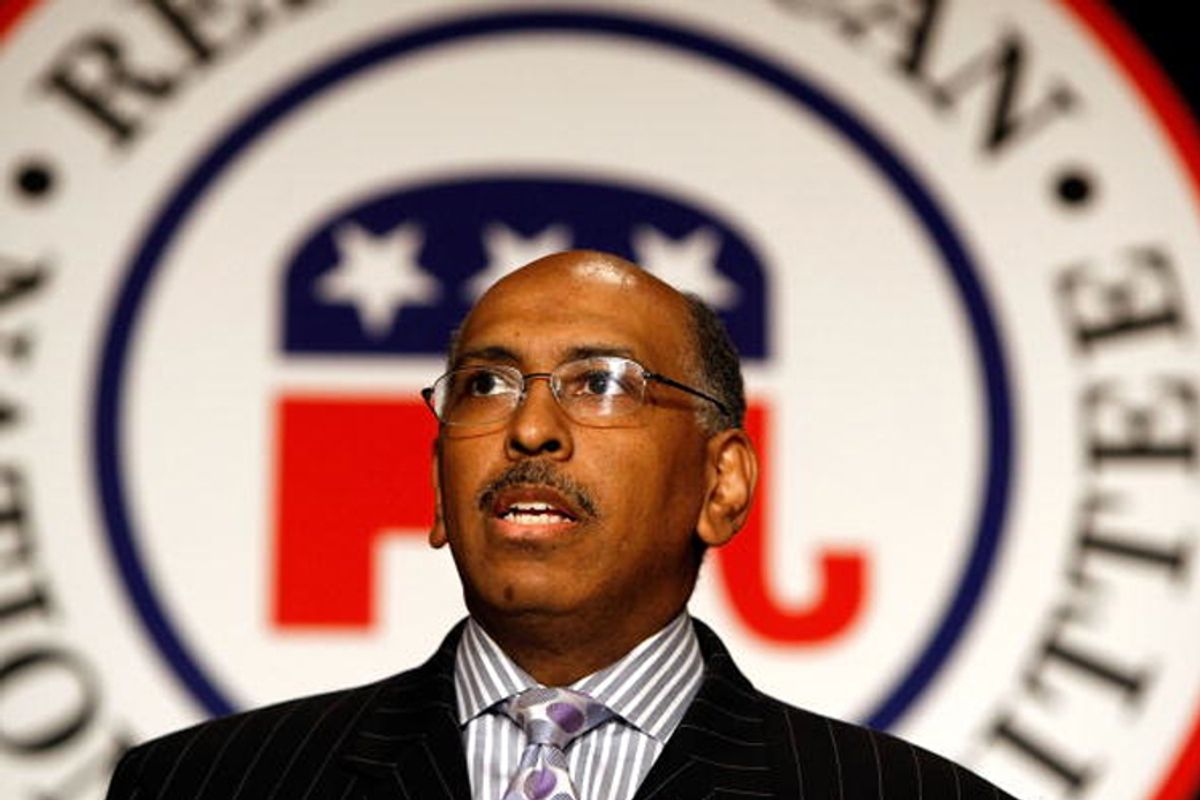 Don't worry -- we'll still probably have Michael Steele to kick around for a while, even after the last couple of weeks.

The buzz has been building on cable news that Steele might be forced out of his job as Republican National Committee chairman any minute. And yes, there are a few obvious reasons why Steele isn't any Republican's favorite Republican these days (though he's clearly the Democratic National Committee's favorite punching bag): the money spent on "bondage-themed nightclub" Voyeur West Hollywood; the insistence that the trouble he's in is because of his race; the forced ouster of the RNC's chief of staff; the general inability to keep himself out of the news.

But Republicans in Washington and outside the Beltway say Steele's still probably safe. "RNC members are busy," former South Carolina GOP chairman Katon Dawson -- whom Steele defeated after six rounds of voting -- told Salon Wednesday evening. "They've got their own elections right now -- they've got primaries -- the last thing they want to worry about is Washington." Dawson says there might be some people who want Steele's job, but "I'm not one of them." "I don't think you could get a quorum to come to Washington right now" to vote Steele out and hand the gig to someone else, Dawson says.

Firing him would require a two-thirds vote of the 168 voting RNC members. Steele was elected not that long ago with 91 votes. To dump him, 21 of them would have to abandon him. For another thing, there's no obvious candidate to replace him, and no apparent movement afoot to start trying. No one has come forward to say they want the job; Steele's term is up in January, and stepping in now wouldn't exactly be a cakewalk. Besides, the only thing guaranteed to bring more embarrassing news cycles than keeping Steele in the job is forcing him out. (And his race, which Steele says is part of his problem, is part of the reason Republicans realize firing him would look bad.) For many in the GOP, no coverage of the RNC is good coverage of the RNC. "I certainly wish they would get off the front page of the paper," Dawson says.

And while Steele's gaffes provide endless fodder for mockery among political operatives in Washington, it's not entirely clear that they matter much to anyone else -- even Republican activists. "I have not had one county chairman -- prominent activist, elected official -- call me up and say, 'Dick, you need to do something about Michael Steele,'" says Dick Wadhams, the Colorado Republican Party chairman. "I've gotten no phone calls about it. I think it underscore that most people are focused on the other much more important parts of this election."

Steele can also point to some actual successes -- Republicans have done well in every big statewide race since he took over. The GOP won the governorship of Virginia and New Jersey, and the Senate race in Massachusetts; Steele doesn't get all the credit for any of those wins, but that track record doesn't hurt him. The party is also still raising money, though not as much as Democrats are: The GOP took in $11.4 million in March, about $2 million less than the Democratic National Committee. (Yes, most of the credit there goes to the healthcare reform bill.) Some big donors are getting uneasy, and some conservative groups have urged grass-roots contributors to find other places for their checks. And groups like the Republican Governors Association, run by Mississippi Gov. Haley Barbour, or a GOP effort to boost statehouse races, led by Ed Gillespie, are taking in more cash than the RNC.

But that's in part because of campaign finance laws that allow unlimited donations to those groups. "When people say major donors are gravitating to the RGA, it's not because they like Haley Barbour and they don't like Steele," says influential conservative activist Grover Norquist. "It's because them's the rules. Now, given the rules, there may be a reason why a smart guy like Haley Barbour decided he wanted to be the RGA chairman, not the RNC chairman ... [But] I don't think Republican donors know who Steele is, either to be mad at him or to write checks to him."

The paradox of Steele's predicament is that for all his bizarre insistence on comparing himself with President Obama -- Steele sometimes gives the impression he wishes the party out of power got to form a shadow government, like in Britain, with himself at the head -- most voters won't have him on their minds when they go to the ballot booths in November. And in a year when Republicans are salivating at the prospect of the midterm elections, that might be the only factor that really matters.

It's never wise to bet on the future job prospects of anyone who's had more than one round of self-inflicted crises in just a year and a half. But Steele weathered the first few storms, and he'll probably weather this one, too. Yes, he may be the ultimate lame duck between now and January, when his term will end and he will almost certainly not win reelection. But chances are he'll keep quacking right up until then.