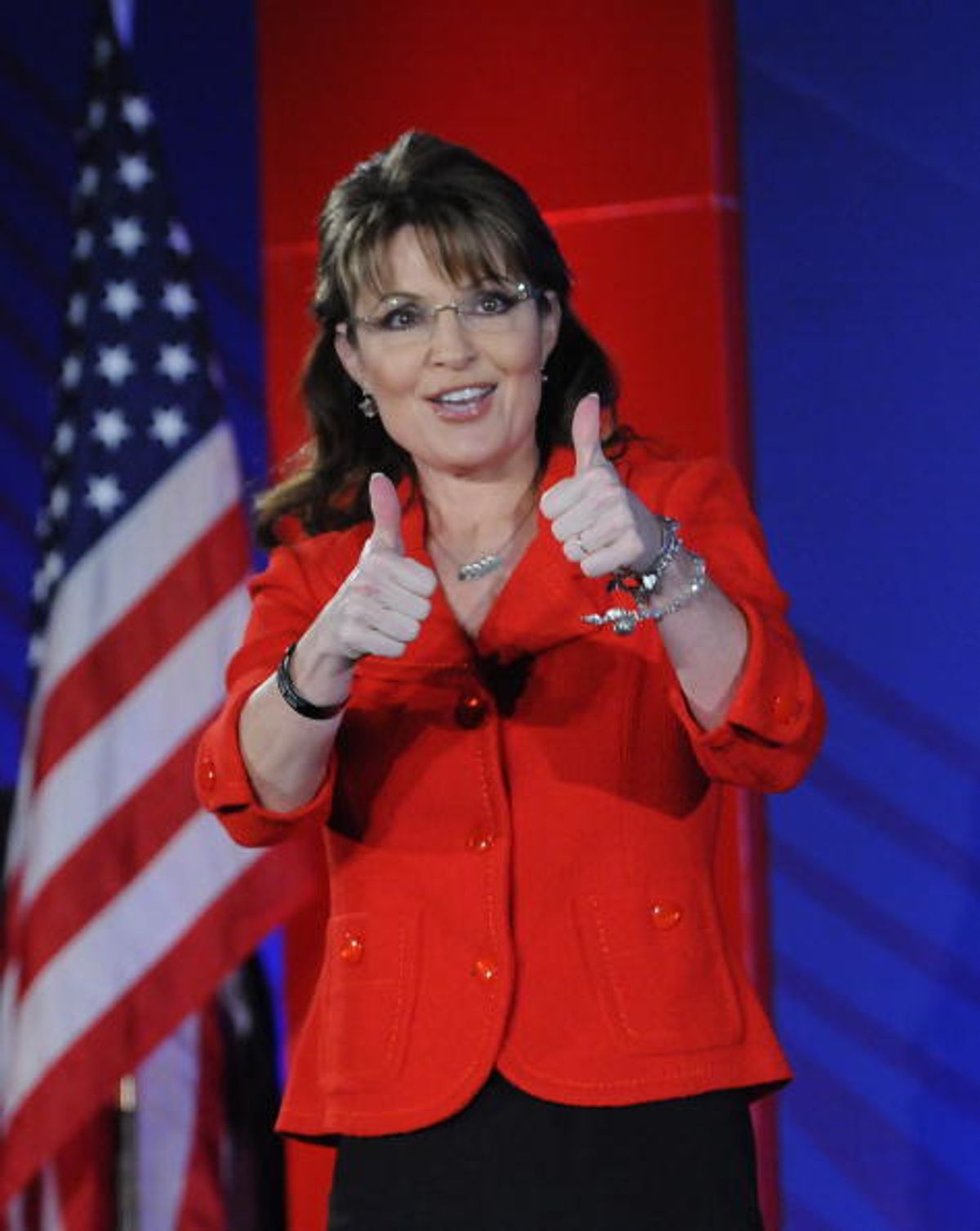 NEW ORLEANS, LA - APRIL 9: (ALTERNATE CROP) Former Alaska Governor Sarah Palin gives two thumbs up to the audience at the Southern Republican Leadership Conference, April 9, 2010 in New Orleans, Louisiana. Many of the Republican Party's most prominent members will be speaking at the conference which runs from April 8-11. (Photo by Cheryl Gerber/Getty Images) (Getty Images)
--

The Southern Republican Leadership Conference is Sarah Palin's world, and the rest of the GOP is just living in it.

Palin just finished up a 30-minute speech here, full of red meat, obnoxious jokes aimed at President Obama (and the media) and -- in an apparent attempt to prove Obama wrong -- a fair amount of foreign policy detail. The crowd loved it, and Palin basked in their adoration, playing for laughs and applause whenever she could.

"A lot of common-sense conservatives can relay some slogans that a majority of Americans like a lot better than [yes we can]," Palin said. "Like 'Repeal and Replace.' 'How's that hopey changey thing working out?' Or my faorite, 'don't retreat reload' -- and that is not a call for violence." That got her another standing ovation. So a bit later, she brought up the 10th Amendment and said, "Shoot, take a look at Texas -- oh, sorry, I said 'shoot.'" (Wonder why that didn't make her Jay Leno standup bit?)

But no one in the room seemed to notice the apparent contradiction. No one in the room, actually, seemed to be doing anything but listening in rapture. ("Run, Sarah, run!" a few people called out during the speech, though the chant never got picked up.) Palin kept rolling along, smiling every time she dropped an applause line. She glanced at her palm at one point, muttering, "poor woman's teleprompter," for another big ovation (though she did seem to be turning the pages on a set of notes pretty frequently, and glancing down at a prepared text for the policy-heavy sections of her speech).

Palin's policy recommendations weren't particularly innovative: drill for more oil, push for more nuclear power, let Israel do whatever it wants, oppose cap-and-trade, cut taxes. ("Jonah Goldberg wrote a good piece about this the other day in USA Today," she said, perhaps the first time that sentence has ever been uttered.) She listed all the ways she disagrees with Obama, saying his "yes we can" slogan turned out to end in sentences like, "Yes we can vacillate, bow, dither." "Just because we can does not mean that we should," she said.

At one point, she mocked Obama for announcing a new willingness to allow offshore drilling in front of a fighter jet. "The only thing missing from that speech was the soundtrack from 'Top Gun' and Joe Biden in a flight suit," she said. "Anything sounds good when you say it in front of a fighter jet!" Yeah -- just ask George W. Bush. (Palin may be the only Republican who could get away with mocking a president for events involving fighter jets; after all, she could plausibly claim the comparison didn't occur to her.) She also brought up Bill Clinton's remarks about Obama during the 2008 primaries, saying, in a raspy voice that was apparently supposed to be a Clinton impression, "If this ain't the biggest fairy tale I've ever seen." Obama might have had the last laugh, though, knocking Palin off cable news as he spoke, back in Washington, about Justice John Paul Stevens's retirement.

There was nothing about the speech that necessarily indicated one way or another whether Palin would run for president in 2012. She's not doing anything that looks like preparing a national organization, but she's so well-known that she wouldn't have to. Her political outfit, SarahPAC, did hand out little packets of Alaska-made caribou and reindeer jerky to every delegate ("An Alaskan Snack from SarahPAC!" the label read, along with invitations to follow her on Twitter and Facebook). And there were a few Palin buttons around the room.

But it's not entirely clear she'd have the whole thing sewn up. As the delegates filtered out of the hall afterwards, I stopped one woman randomly, figuring her own Palin button meant she was a big fan. True enough, she was. "It was awesome," she said, identifying herself only as Loretta from east Tennessee. "She's wonderful. She thinks the way America thinks, she knows what we want, and she's not afraid to voice it... We need change, but we can't afford Obama's change -- he's killing us." Palin, she told me, would bring the right kind of changes -- jobs, prosperity, God back in our country. "This is a Christian country, it's not a Muslim country," she said. "We have Muslims here, and they are welcome here. But we as Christians have rights, too." Obama, she insisted, is a Muslim (which is why she wouldn't tell me her last name or exactly where she lives). So surely, Loretta would be voting for Palin if she ran in two years? "I don't think she's ready," she said. "I love her. I don't think we're ready for her as president yet... I think she still needs to educate herself a little more on foreign policy."

Watch the reception Palin got as she walked in to deliver the speech here: