One of the potential front-runners, Obama's solicitor general, would shift the Supreme Court to the right 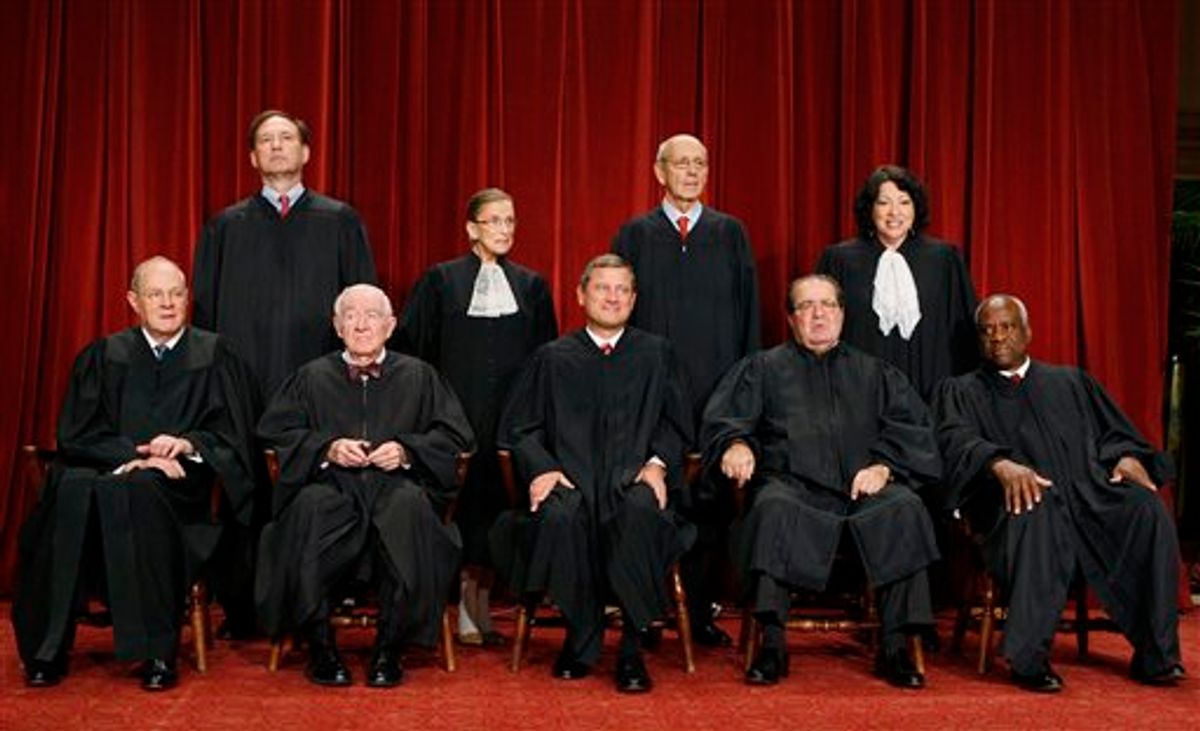 Justice John Paul Stevens, who was appointed to the Supreme Court by Gerald Ford in 1975 and then became the leader of its "liberal" wing, told the White House today that he was retiring in the Summer.  I had been planning to write a comprehensive post documenting the reasons why one of the clear front-runners to replace Stevens -- current Solicitor General and former Harvard Law School Dean Elena Kagan -- would be such a harmful choice (similar to the post I wrote along the same lines about Cass Sunstein's record).  I'm not quite finished with all of my Kagan research yet, but in light of Stevens' announcement today, I do want to make one key point about this.

When President Obama chose Sonia Sotomayor to replace David Souter, that had very little effect on the ideological balance of the Court, because Sotomayor was highly likely to vote the way Souter did in most cases.  By stark contrast, replacing Stevens with Kagan (or, far less likely, with Sunstein) would shift the Court substantially to the Right on a litany of key issues (at least as much as the shift accomplished by George Bush's selection of the right-wing ideologue Sam Alito to replace the more moderate Sandra Day O'Connor).  Just click on the links in the last paragraph here, detailing some of Kagan's "centrist" (i.e., highly conservative) positions on executive power, civil liberties and Terrorism for a sense of how far to the Right she would be as compared to Stevens.

Over the past decade, the Court has issued numerous 5-4 decisions which placed at least some minimal constraints on executive power.  Stevens was not merely in the majority in those cases, but was the intellectual leader justifying those limits.  And he often went further in demanding due process and accountability for the Executive than even the "liberal" wing in general was willing to go -- as exemplified by his joining Justice Scalia's dissent in Hamdi, where the two unlikely allies both argued that the President could never detain U.S. citizens as "enemy combatants," but instead must charge them with a crime (e.g., treason) and obtain a conviction in order to imprison them.

As Alliance for Justice President Nan Aron put it today:  Stevens was a "master tactician" who "emerged as one of the Court's most vocal and eloquent spokespersons for individual liberties, separation of powers, and equal access to justice."  Given Stevens' status as the leader of the Liberal wing, The Nation's Ari Melber said today:  "With Justice Stevens retiring, it will take a nominee like Harold Koh just to maintain the Court's status quo."

The danger that we won't have such a status-quo-maintaining selection is three-fold:  (1) Kagan, from her time at Harvard, is renowned for accommodating and incorporating conservative views, the kind of "post-ideological" attribute Obama finds so attractive; (2) for both political and substantive reasons, the Obama White House tends to avoid (with a few exceptions) any appointees to vital posts who are viewed as "liberal" or friendly to the Left; the temptation to avoid that kind of nominee heading into the 2010 midterm elections will be substantial (indeed, The New York Times' Peter Baker wrote last month of the candidates he said would be favored by the Left:  "insiders doubt Mr. Obama would pick any of them now"); and (3) Kagan has already proven herself to be a steadfast Obama loyalist with her work as his Solicitor General, and the desire to have on the Court someone who has demonstrated fealty to Obama's broad claims of executive authority is likely to be great.

As but one example, see here as National Review's Ed Whelan, a former official in the Bush/Cheney OLC and a far-right legal ideologue, lavishly praises Kagan's record on "national-security and executive power" issues while discussing her possible nomination to the Court.  Such admiration for Kagan's record among the Right is far from unusual; as the NYT's Eric Lichtblau put it last year:

When Elena Kagan went before the Senate Judiciary Committee in February as President Obama’s nominee for solicitor general, Republicans were almost as effusive as the Democrats in their praise for her.

There was no daylight between Ms. Kagan, who was the dean of Harvard Law School, and Senator Lindsey Graham, Republican of South Carolina, as he led her through a six-minute colloquy about the president’s broad authority to detain enemy combatants. . . . Indeed, there was so much adulation in the air from Republicans that one Democrat, Senator Amy Klobuchar of Minnesota, joked at the hearing that she understood how Ms. Kagan "managed to get a standing ovation" from the Federalist Society, a conservative legal group.

Does that sound like an appropriate choice to replace Justice Stevens?

There won't be any questions about Kagan's qualifications, expertise or intellect -- she's  exceptionally smart and knowledgeable -- and she largely holds positions on social issues, such as a solid pro-choice and pro-gay record, that will be pleasing to progressive constituencies.   But the same is true for many outstanding candidates to replace Stevens, including Appellate Court Judge Diane Wood, former Yale Law School Dean and current State Department legal adviser Harold Koh, and Stanford Law Professor Pamela Karlan.  And those choices, unlike Kagan (or Sunstein), would maintain the Court's fragile ideological balance rather than shifting it decisively to the Right for decades to come.

UPDATE:  Like clockwork, it is now reported, by The Huffington Post, that Kagan "is rapidly emerging as a frontrunner."

Meanwhile, in very related news, Dawn Johnsen has now withdrawn as nominee to head the Office of Legal Counsel.  Despite there being 60 and then 59 Democratic votes in the Senate -- plus the support of GOP Sen. Richard Lugar (though with the opposition of Sen. Nelson) -- Johnsen's nomination has sat without a vote since January, 2009.  It is hard to believe, to put it mildly, that the White House would have been unable to secure her confirmation had it wanted to (even if by recess appointment if nothing else).  Johnsen was one of the best Obama nominees to an important post, if not the best, and her treatment reflects many of the points I made above.