How to make amazing mashed potatoes

With the right technique, you can make them show stealers even without glamming them up with fancy ingredients 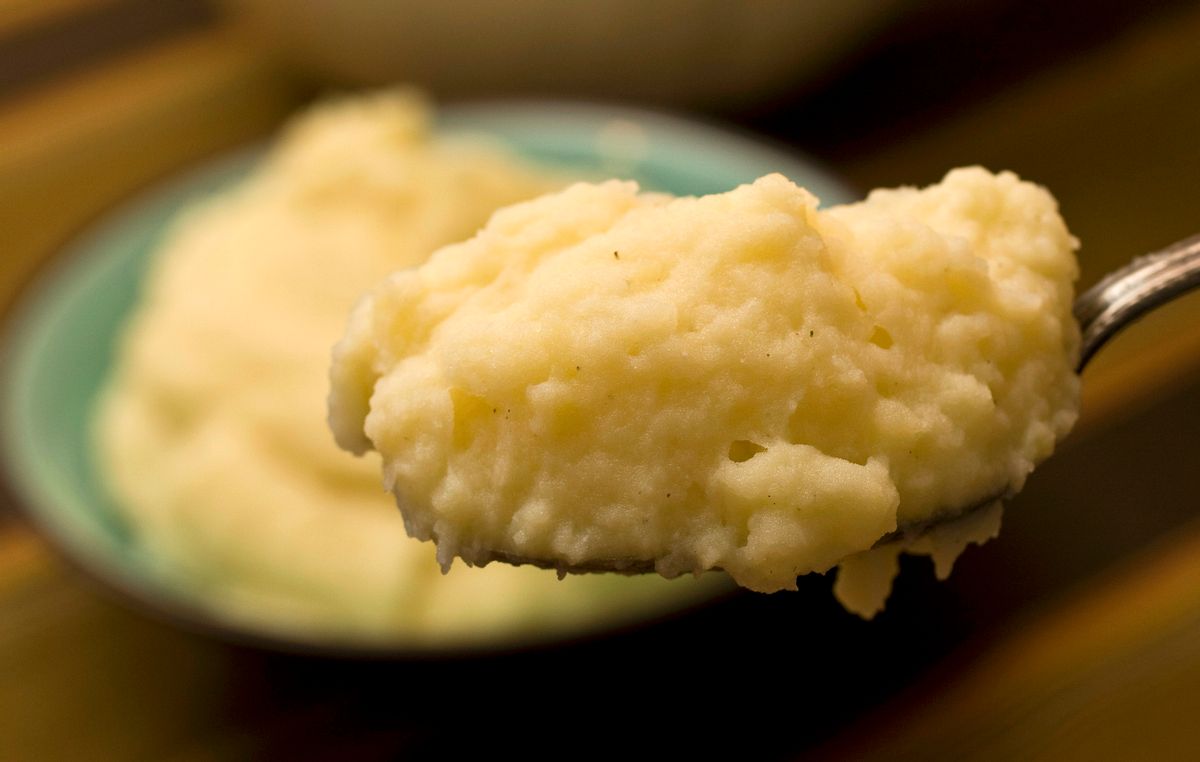 **FOR USE WITH AP LIFESTYLES** Buttermilk Mashed Golden Potatoes are seen in this Tuesday, Sept. 28, 2008 photo. By choosing Yukon Gold for your mashed potatoes you start with a naturally rich flavor and beautiful yellow color before adding the lower-fat ingredients for these mashed potatoes. (AP Photo/Larry Crowe) (Larry Crowe)
--

Early in culinary school, I was having a serious conversation about mashed potatoes. "Well," someone said, recalling a line from his favorite cookbook, "No one ever dared to use as much butter as Joel Robuchon." The room went quiet, in awe of this legendary French chef who uses as much butter as potato in his version, mashed potatoes with a holy yellow halo. (Conversations like this were what made culinary school awesome.)

A year and a half later, just weeks from graduating, I found myself on the vegetable station of our school's classical French restaurant, making mashed potatoes, thinking about Robuchon. I peeled 20 pounds of potatoes every day, eyeing the butter in the cooler, counting out 20 blocks and imagining plowing them into my mashers. And you know what? I didn't dare.

It wasn't just that I was a wuss (I was), but because after making hundreds of pounds of mashed potatoes for weeks, I grew attached to them the way they were. I realized that they reach their highest form not through putting things into them (even a shit-ton of butter), but through technique, by knowing how to cook and dry the potatoes so they mash up fluffy, how to keep them hot so they stay smooth and velvety, how to add the milk and butter so that they're rich and round but still taste above all like potatoes.

These mashed potatoes have gravity. No matter what else is for dinner, your fork will just keep falling into them, over and over, until they're all gone and you start eyeing the bowl, imagining piling the rest of them on your plate.

Which potato to use?

The more starch a potato contains, the less inherent moisture, and this affects the texture dramatically. Low-starch and high-moisture, or "waxy," varieties, like red "new" potatoes, become very dense and thick when mashed — or pasty and gummy to their detractors. Moving up the scale, "all-purpose" and "chef's" potatoes like Yukon Golds have a moderate starch level and offer a nice, safe, wishy-washy, middle-of-the-road, convictionless compromiser's texture. And finally, high-starch varieties like russets or Idahos mash up light and fluffy — or dry and mealy if done badly.

My preference is for high-starch potatoes because of the wonderful play between the lightness of the potatoes and the grounding silkiness and richness of butter and milk, and the techniques I lay out below will solve any textural problems. But I'll be diplomatic about the other types, because having recently had a delicious French fry made from waxy potatoes — a mortal sin in the eyes of all French fry purists — I reserve the right to be an agnostic with preferences. (Is that like a friend with benefits?)

Special equipment: Sorry, you're going to need a food mill or a potato ricer. Not that you can't make mashed potatoes with a tool that looks like a branding iron, but I'm talking about amazing mashed potatoes here, and only a food mill (you might know it as an "applesauce maker") or a potato ricer (which looks like an overgrown garlic press and usually costs only a few bucks) will thoroughly mash the potatoes, making them lump free, without shearing open the cells. A food processor or blender, on the other hand, will rip the cells apart, releasing all the starch inside them, and instantly turning your dinner into book paste. And didn't we get over eating glue in kindergarten?