More cause and effect in the War against Terrorists

Reports of a bus full of Afghan civilians being shot by U.S. soldiers highlights the paradox of our War on Terror 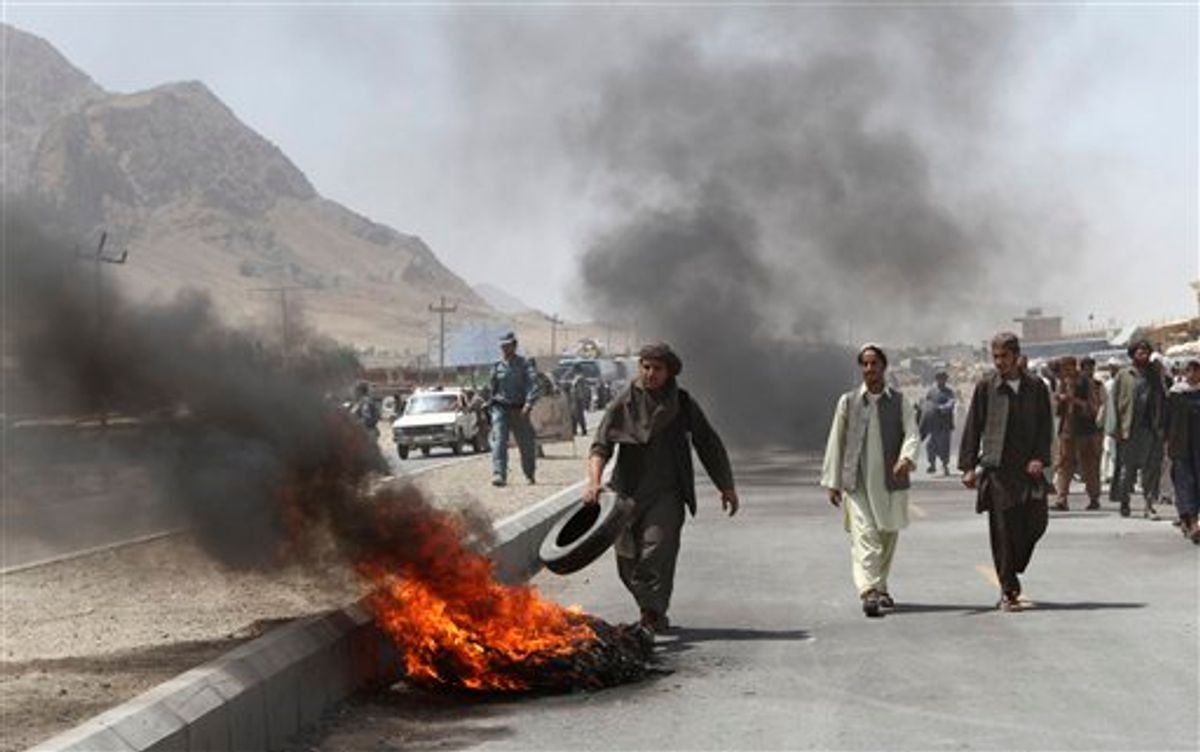 Afghan protesters burn tires to block a road during an anti-American protest in Kandahar, south of Kabul, Afghanistan, Monday, April 12, 2010. International troops opened fire on a bus carrying Afghan civilians early Monday, killing four people and setting off anti-American protests in a southern city that is a hotbed of the Taliban insurgency.(AP Photo/Allauddin Khan) (AP)
--

The extreme paradox of our actions in the Muslim world is now well-documented: namely, the very policies justified in the name of fighting Terrorism (invasions, occupations, bombings, lawless detentions, etc.) are the precise ones that most inflame and exacerbate that threat.  With the news this morning that "American troops raked a large passenger bus with gunfire near the southern [Afghan] city of Kandahar on Monday morning, killing as many as five civilians and wounding 18" -- a report which unsurprisingly "infuriated Kandahar leaders" and triggered anti-American demonstrations -- there's one small though revealing vignette from last week I wanted to highlight.

As I wrote about last week, American troops in mid-February entered a village in the Eastern Afghan province of Paktia, killed five civilians (a male government official, his brother, and three female relatives, including two pregnant women and a teenager) and then lied about what happened.  ABC News this week described the efforts of U.S. Special Forces to apologize to Haji Sharabuddin -- the 80-year-old patriarch of that family who lost two sons, two daughters and a granddaughter in the attack -- by offering him two sheep (a gesture of begging forgiveness in Pashtun custom), and the article included this:

Presenting sheep is such a powerful form of requesting forgiveness that the father is now obligated not to take revenge, even though he has told reporters he wanted to become a suicide bomber. . . . But the incident so inflamed the family, the father initially vowed to take revenge, "even if it breaks me into pieces."

"I have lost patience. I am obliged to revenge my martyrs," he told an ABC News cameraman on March 18. "I will destroy everything I have and will launch my own suicide attack. My heart is burning."

The ABC News article celebrates the fact that the sheep offering "will help defuse" lingering anger over the massacre (the U.S. military, following standard practice, previously paid the family $2,000 for each victim it killed).  But the fact that this 80-year-old man was vowing to perpetrate a suicide attack on U.S. forces speaks volumes about the effects of our actions in that country (and had this man carried through on that threat, American media -- as always -- would undoubtedly have depicted it as some sort of senseless, irrational act of religious fanaticism underscoring yet again how primitive, violent, and full of baseless rage those radical Muslim Terrorists are and how vital it therefore is that we stay and defeat these Evil Enemies).

This is what has been happening over and over for a full decade now.  How many new America-haters and suicide bombers did we create today with the story (accurate or not) of our bombarding that civilian bus with bullets?  How many have been created by what Gen. McChrystal calls the "amazing number" of innocent people and families we've shot at Afghan checkpoints in the last nine months alone?  Listen to the embittered anti-American rage of the brother of the 21-year-old Reuters photographer killed by the Apache helicopter in Baghdad after the brother (along with hundreds of millions of other Muslims) viewed the WikiLeaks video.  Two weeks ago, horror over a deadly suicide attack in the Moscow subway system was quickly followed by the unsurprising revelation that the suicide bomber was the young widow of an insurgent killed by Russian forces three months ago, because suicide bombers tend to be what gets produced when foreign armies kill people's loved ones.  WikiLeaks is now preparing to release graphic video of an American airstrike last year that killed close to 100 Afghan civilians, after which the U.S. vehemently (and falsely) insisted that it was Taliban fighters, not civilians, who were killed.  How many suicide bombers did that incident create, and how many will be created when the video of what we did is broadcast around the world?

Last September, when Najibullah Zazi was arrested for plotting to bomb the New York subway system -- a plot which administration officials anonymously announced "was the most significant since 9/11" -- the key, overlooked fact was that this was one of the first times an Afghan citizen was involved in alleged acts of Terrorism against the U.S.  Similarly, there's no question that anger over U.S. wars in Afghanistan and Iraq was a major factor in Nidal Hasan's attack on Fort Hood.  And in an acrobatic act of Orwellian rationalization, those plots -- caused at least in large part by our current policies in the Muslim world -- are then cited to justify those policies and demand their continuation (see, this proves that we must stay over there and continue to fight these heinous Terrorists).  Both Gen. Petraeus and Gen. McChrystal have been admirably candid about the link between our actions and the Terrorist reaction they cause, along with the need to be mindful of that causal link, but waging war in countries where the Enemy is composed of a substantial part of the population will inevitably entail incidents like the bus shooting this morning, and thus inevitably worsen the Terrorist problem we are ostensibly trying to combat.

Even worse, we continue to vest extraordinary powers in the President and to change our form of government based on the bipartisan decree that WE ARE AT WAR! -- meaning not our wars in Afghanistan and Iraq but our "War on Terror" generally.  It has been obvious (and openly acknowledged) from the start that this "war" has no real end, at least not for decades, which means all these executive powers to which we are acquiescing are essentially permanent.  But just to be sure, the U.S. Government continues to engage in a litany of actions that spawn more and more anti-American hatred and thus ensure that the Terrorism used to justify these always-expanding domestic powers will endure forever.  Even for those who are convinced of both the justifiability and morality of our ongoing wars, aren't these costs intolerably high?

Speaking of counter-productive policies, Iran analysts Flynt Leverett and Hillary Mann Leverett today present a very well-reasoned argument that the new "no-first-nuclear strike" policy announced last week by the Obama administration is -- as a result of the explicit exclusion of Iran -- reasonably understood in the Muslim world (especially Iran) to constitute a threat of first-strike nuclear attack on the Iranians, and will do more to motivate Iranian nuclear proliferation than any other act in some time.  Without necessarily endorsing all of the points they make, I highly recommend their analysis.

UPDATE:  The reason we know about the U.S. Special Forces' sheep sacrifice is because The Times of London's Jerome Starkey, who broke the story about what really happened in the Eastern Afghanistan civilian killing, was present at the scene and described it in detail, including the fact that the U.S. Vice-Admiral who offered the sheep, along with Afghan soldiers, wanted to bar the media from witnessing the event and refrained only when the family members insisted that they stay.  In contrast to ABC 's sunny report that all is now forgiven, Starkey writes:

"When people come to your gate and ask forgiveness, according to Afghan law, it’s difficult to reject them," Haji Sharabuddin said later. "I am happy they came." But the family insists that it still wants justice. "I don’t care about the money," Haji Sharabuddin said. He believes the troops attacked after faulty intelligence from one of his enemies — a spy. He wants the Americans to face international justice and the spy handed to Afghan authorities and punished. "When they surrender the spy, then I will make a decision. Maybe I will forgive them," he said.

As more people victimized by such acts realize that we are a country that only Looks Forward and Not Backward, the rage left by such incidents seems likely to intensify.