Is Apple the new Microsoft?

Despite Steve Jobs' many triumphs, the answer is no. Total domination isn't as easy as it used to be 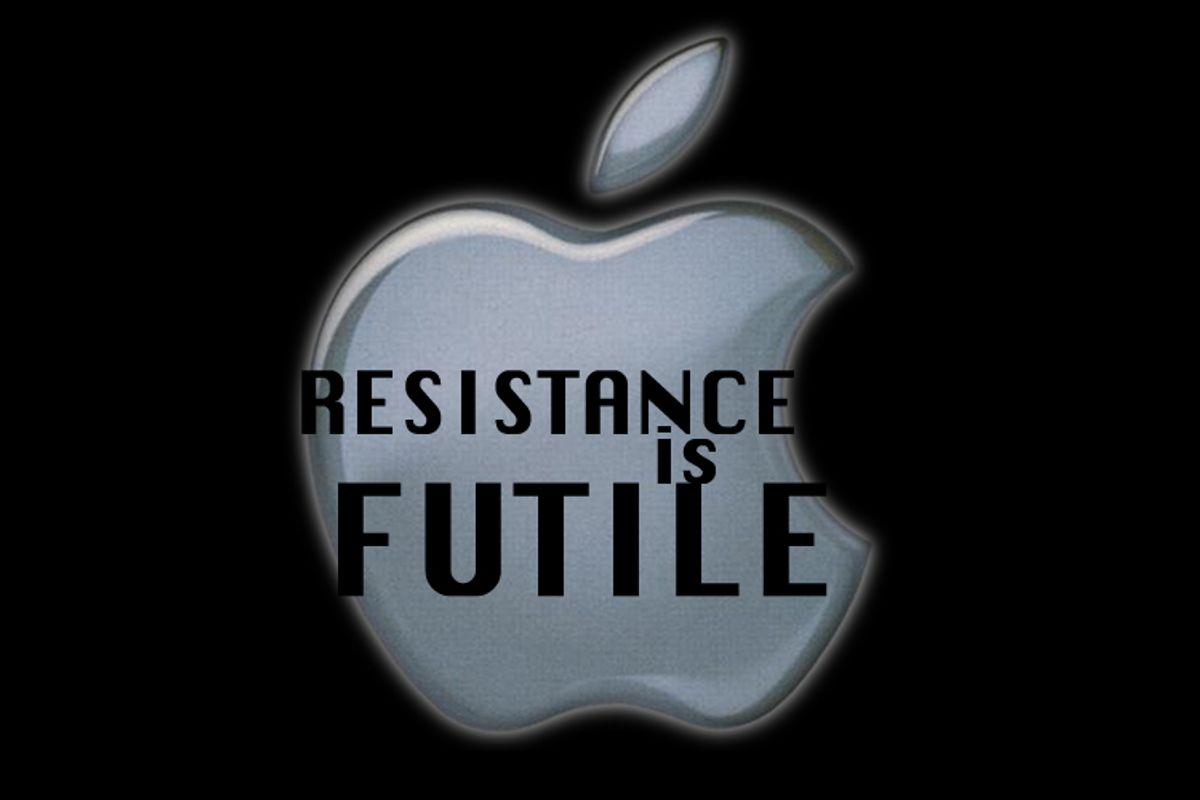 Is Apple the new Microsoft, a monopolizing bully intent on stomping all its competitors into quivering jelly? Or does the success of the iPhone (and iPod and iTunes and iPad) prove something more profound -- that the virtues of openness are overrated?

A debate that has been swirling around these parameters for months exploded with renewed vigor last week after a close look at the new terms embedded in the license for the iPhone's software development kit (SDK) revealed that Apple now prohibits the use of cross-platform third-party programming tools for the creation of new iPhone apps. Critics immediately compared the command-and-control tactics to the worst excesses of Microsoft's glory days, and charged Steve Jobs with betraying a core value of the Internet. You know, that one that gives us the right to do whatever the hell we want to, any time we want.

Apple's fans, who are legion, were quick to point out that Apple's insanely great products are so awesome precisely because the company obsessively controls every last detail of their design and manufacture -- including the design and manufacture of third-party software applications designed to work with those products. IPhone apps look good and work smoothly because Apple approves every single one individually, and ensures that they all play by Apple's rules. And hey, no one forced you at gunpoint to become an iPhone developer. If you don't like the terms, find something else to do.

The SDK brouhaha is just the latest flashpoint for a larger debate over the merits of openness versus control that has been brought to the fore in recent weeks by the debut of the iPad. Whether you are mad merely because the iPad won't render Flash videos or lacks a USB port, or see the device as outright blasphemy against the Way of the Internet, à la Boing Boing's Cory Doctorow, the basic argument is simple: Apple is limiting user choice and developer freedom, and that's not supposed to be good. Apple's decision to file a wide-ranging patent violation complaint against smart phone maker -- and Google ally -- HTC has also riled the natives. Lawsuits, restrictive user agreements, purposefully designing software that doesn't work with competitor offerings -- the Internet was supposed to treat stuff like that as a malfunction, and route around it.

The fact that the Internet is full of people willing to criticize a corporation's unilateral actions should surprise no one, even it means painting Apple -- long considered the antithesis of Microsoft, in terms of cultural cachet -- in shades of Windows blue. But in part because the company in question is Apple, the creator of products that millions of people love with a passion that Outlook, Word, Windows 3.1 or that hellish animated paperclip could never hope to engender, we are now witnessing something extraordinary -- a spirited defense of closed platforms and control by people who aren't paid lackies of corporate bullies.

"Next to the iPhone platform," he writes "Microsoft's Windows platform looks like a Berkeley commune from the late 60s." But nonetheless, "the iPhone software platform has been, out of the gate, the most innovative in the history of computing."

Johnson's point is echoed in a post by DailyKos' Markos Moulitsas, "My iPad as a Tool," in which the argument is made, with a nod to the triumph of gaming consoles over PC games, that closed systems reduce uncertainty, software crashes, and related buggy-ness. Open systems are just so messy! And in classic Kos fashion, he notes that "Obama's ACORN goons aren't forcing you to an Apple store. " (Not yet, anyway. Maybe the president is waiting until after he secures a second term.)

Hey, Linux, hey, Firefox -- hey, all you free-software geeks ... your rabble-rousing day in the sun is over. Openness ain't all that -- where's your iPhone? And if the free-wheeling Internet is so great anyway, why are so many bazillions of people hanging out at Facebook and Twitter, willingly submitting themselves to the constraints of a new kind of walled garden?

As someone who used to write enthusiastically about free software and the gift economy and the inherent advantages of openness, you would think I might have a dog of my own in this fight. But I don't. I check in on the insane pace of smart phone evolution and read news reports that Google and scores of other companies are developing their own versions of the iPad, and I think, if the features I want in a product aren't provided by Apple, someone else will be more than happy to oblige me, in just a few months, for a lower price. That is not too shabby. And after watching how Friendster and then MySpace disintegrated from behemoths to also-rans in a matter of months, I am convinced that if the Facebooks and Twitters of this world (and, yes, the Apples) stop offering a good experience for people, or run into competition that offers a better experience, they will vanish in no more time than it takes to click the "like" button on a wittily worded status update.

This is not the status quo we enjoyed in the early and mid '90s, before the Internet blew up the rules of the battlefield. Microsoft did have monopoly control, did kill Netscape and scores of other companies, and did limit our freedom of action, and charged us exorbitant fees for the pleasure. Maybe Steve Jobs will succeed in his blood feud against Adobe, but it won't be by building walls that are too high to jump, it will be by properly managing a balancing act between openness and control.

It is long past time for us to dispense with binary notions of closed versus open, and instead think of the technology ecosystem as populated by multiple hybrid beasties. In this new landscape, some succeed with tighter, proprietary models -- Apple -- while others flourish through a comparatively greater embrace of openness -- Google. But everyone competes on a basically level playing field -- the Internet and the ever-lower cost of computing processing power make certain of that. In this environment, you fail when you don't deliver real value to your customers, not because you chose a strategy that was more open or closed than that of your competitors, and especially not because you leveraged your market dominance into crushing a competitor who might have had a better product than yours.