Having a Japanese knife makes you a serious chef 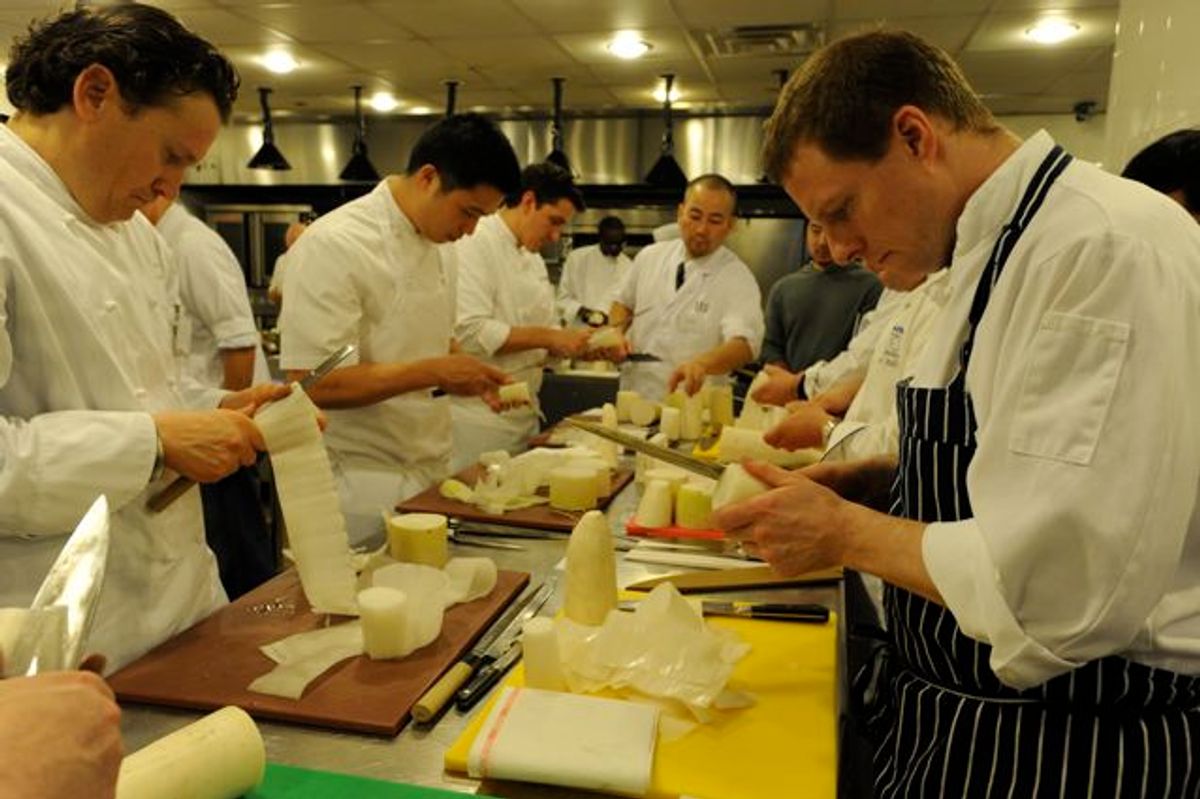 Eddy Leroux (left) and other chefs "unrolling" their daikons
--

In the interest of cultural and culinary exchange, the Gohan Society offers professional chefs -- including ones from Daniel and wd-50 -- the opportunity to learn the art of Japanese fish mastery, taught by chef Toshio Suzuki of Sushi Zen restaurant. This is a series of reports and reflections from that course.

Eddy Leroux is a French chef of the first order, commander of the kitchen at the four-star Daniel, but right now, he's struggling with a radish. As I look over the room of Western chefs practicing a cutting technique just taught to them by the sushi master Toshio Suzuki, it's Leroux I notice first -- his slicked-back hair trembling at the ends, his face flushing with color and beads of sweat gathering on his forehead.

OK, so it's not really the daikon radish that's frustrating him. It's the near-impossible task of cutting it first into a perfect cylinder and then rotating it against his knife to shave off a see-through-thin layer that piles up on the table in one long ribbon. I mean, it's not every day chefs try to turn a vegetable into a roll of toilet paper.

It's a traditional Japanese test of the sharpness of your knife, but even more so of control and patience. And since today's class focused on the history of Japanese knives and how to care for them, I thought it may have also been a little bit of a chiding joke, a gentle rebuke to those chefs who came to class with their very beautiful, very expensive Japanese knives but without the proper skills to use them.

For as long as I've been interested in professional cooking, I've heard about Western chefs trading in their European blades for their harder, better, faster, stronger Japanese counterparts, especially the traditional hand-forged ones. Aside from being gorgeous objects, they can simply do things other knives can't. I once blind-tasted daikon cut with different knives and nearly everyone agreed that the sample made with a traditional Japanese knife tasted better -- the flavor was brighter; it bloomed as you ate, and we learned that the sharper edge cut more cleanly, leaving more cells intact, and leaving the full flavor to be released only as you chewed.

You can quibble over whether that difference is worth the thousands of dollars one of these knives can cost, but when you combine expensive, high-performance tools with the proud culture of professional cooking, you're probably going to get some macho my-knives-are-bigger-than-yours collectors, shallow poseurs with hard-hit credit cards. And so I looked around the room, secretly searching for chefs with oversize swagger and undersize seriousness.

But I didn't see that person. Instead, I saw Eddy Leroux, with his intense determination to get his cuts right. I saw Top Chef Master Wylie Dufresne of wd-50, humbly trying, failing and trying again to unroll his daikon. I saw Michael Romano, chef of the Union Square Café, Zagat's most popular New York restaurant for nearly a decade, working on a way to sharpen his knife just a little more precisely.

Instead of showing off, what I saw was humility and earnest work. Why was everyone so serious? "In Europe, there isn't this culture of the knife," Dufresne said to me. Earlier in the class lecture, we heard about master smiths folding glowing metal and pounding out their edges by hand, just like samurai swords, and about how the samurai themselves treated their cooking knives with the same spiritual reverence as their more lethal blades. "There's just this extreme level of discipline," Dufresne continued. "And while there's more involved care, it's actually kind of easier to maintain your knives, because the Japanese care so much about them they really try to explain and communicate everything that goes into them."

Michael Romano picked up his first traditional Japanese knives nearly 30 years ago. He was drawn to their artistry, but, when he described to me the moment when he decided to buy one, I was struck by how he made no mention of their sharpness. Rather, he said, "I knew they would challenge me to improve my knife skills and control."

And when I asked Leroux why he was breaking a sweat, he said, "The knife I have requires more skill to sharpen and to use; it will take me at least a year before I can really perform with it. I first saw it in 1998, and it was too expensive, but as I progressed in my career, I became mature enough. I'm very happy I could buy it for myself for Christmas; I have a feeling of a piece of art in my hand ... this kind of knife forces you to be excellent."

While all of these chefs love how these knives cut, they all saw a larger purpose to why you would spend several months' worth of rent on one -- the challenge of making it worth it, or, rather, of making yourself worthy of it. It's not that you can own a tool made by a master smith, a master artist and craftsman; it's that once you own it, you have to demand of yourself work worthy of the tradition and skill that went into it. It's talismanic, a call to a higher authority even when you're in the weeds and the food is just begging to be cooked and sent out and forgotten about. You put your hand on that knife, and you remember that every cut has to be as good as you can make it.

I thought back to what I imagined might have been Suzuki-san's test of these Japanese knife fans' true dedication, and I realized that I was looking at it the wrong way. The point wasn't that they didn't know how to do what they were doing, but that they were all trying so hard at it. They were challenging themselves to honor the knives the owned.