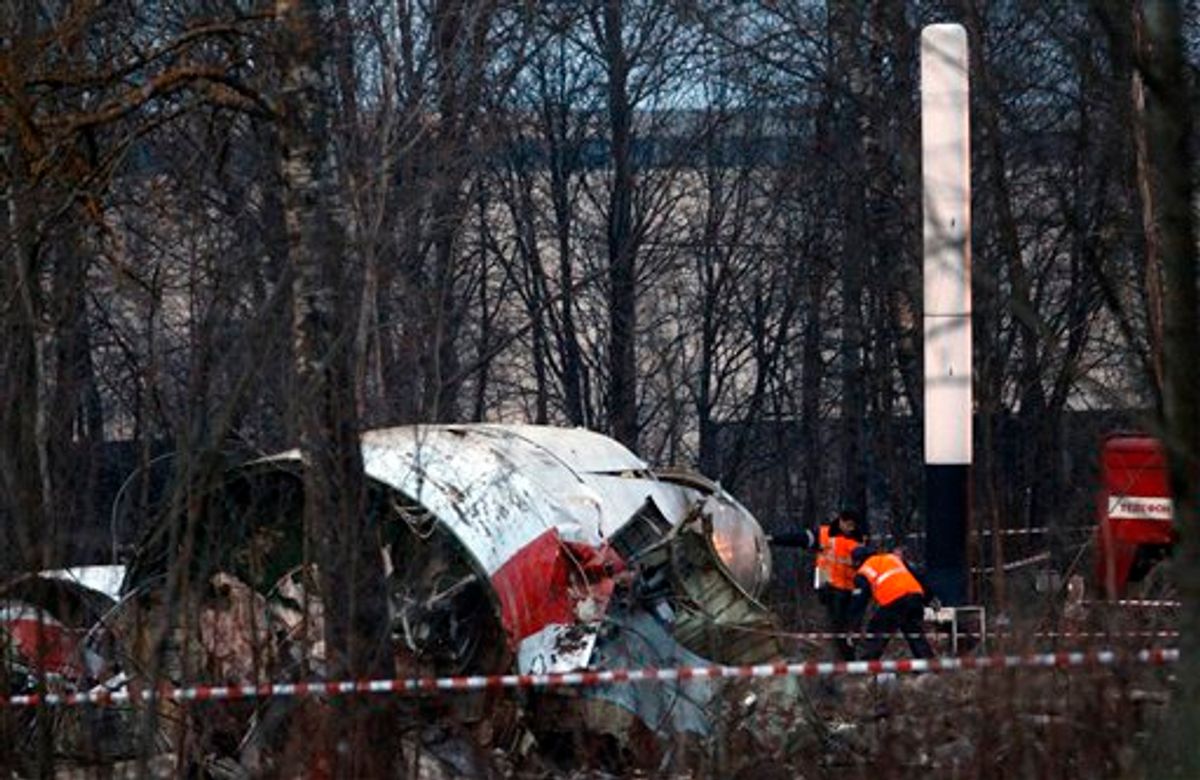 Rescue workers inspect the debris on the site of the plane crash near Smolensk, western Russia, Sunday, April 11, 2010. Polish President Lech Kaczynski, his wife and some of the country's most prominent military and civilian leaders died Saturday along with dozens of others when the presidential plane crashed as it came in for a landing in thick fog. (AP Photo/Sergey Ponomarev) (AP)
--

A short note about Saturday's plane crash in Russia that killed Polish President Lech Kaczynski and 96 others.

The aircraft was a Soviet-built Tupolev Tu-154, a three-engined jetliner that looks something like the Boeing 727 -- slightly larger but with less capacity. Whenever a Soviet-era airliner crashes, the plane is invariably described as "old," "aging" or "obsolete." No exception this time around. But this isn't necessarily so. Yes, most of the various Antonovs, Tupolevs, Yakovlevs and Ilyushins -- the staples of Soviet commercial aviation, still widely used around the globe -- are economically obsolete. They’re fuel thirsty, a generation or two behind in terms of avionics (as are many Western planes still in service), and cannot be outfitted with the sorts of passenger accoutrements now commonplace. But they are not dangerous, and they are often surprisingly young. The Tu-154 is an old design, having entered commercial service in 1972, but the model remained in production for over 25 years. The one in Saturday's crash was built in 1990, making it newer than many airliners flying in the United States.

While it's possible that some sort of on-board systems failure may have contributed to the accident, the evidence thus far points to crew error. There was heavy fog at the Smolensk airport, and reportedly the flight had been instructed not to land, as visibility had fallen below the minimum required for landing. The pilots elected to try anyway, making four attempts, descending too low and striking trees.

Visibility criteria vary runway to runway. Smolensk is not equipped with an instrument landing system (ILS), the standard approach system that typically guides pilots to a point around 200 feet above a runway's threshold. Thus the plane would have been making a so-called nonprecision approach, subject to higher minimums and an overall trickier procedure.

I flew aboard a Tu-154 once. It was 1986, just before Chernobyl, and I was going from Moscow to Leningrad, as it was still known, with my mother.

It was snowing like crazy on the ramp at Sheremetyevo, the Tupolev's distinctive profile emerging out of the whiteness as the workers marched us onto the apron toward the drive-up stairs. On the outside at least, the -154 is a sexy plane, notable for its bullet-shaped tailfin fairing and triple-bogey landing gear -- a style emulated by Boeing's 777. Rather than retracting into the belly, the gear swings backward into teardrop nacelles protruding from the wing.  I could make out the Aeroflot livery, just as I'd seen it in those books in junior high, understated and vaguely military: the blue cheatline; the winged hammer and sickle; that iconic "CCCP" along the center nacelle. (Who can forget those letters from the uniforms of the old Olympic hockey teams, or from the ICBMs of the '60s and '70s -- the Cyrillic "SSSR.")

Aeroflot was never known for its in-flight pampering, and the babushkas served us a cup of tasteless, urine-colored apple juice and what appeared to be a hamburger bun stuffed with newspaper.

Next to me sat a Muscovite about my age –- a blond kid with a jawline like the villainous commie boxer from Rocky IV. This was '86, remember, the Cold War still on, and my seatmate was aghast at the novelty of encountering an actual American. He was thrilled to shake my hand and try out his English. Like me, he was on holiday, eager to take pictures of the frozen Neva and ice-covered Hermitage in Leningrad (or drink himself silly on cheap champagne, like most of the tourists I would encounter up there). He'd just gotten a new camera, and he took it from the overhead bin to show me proudly. At least I think it was a camera. Oversized and clunky, the device looked like a blender held sideways. He kept calling it "my apparatus."

Our high-altitude détente continued all the way to Leningrad. "I can show you of America," said my friend, and with that he took out a piece of paper. Beaming, he proceeded to draw me a picture of the World Trade Center, accurately placing the north tower's cloud-popping rooftop antenna. Pointing to the buildings he said, "One hundred and ten stories!"

Quick, what is America's most ubiquitous global export? Think now. Is it Coca-Cola? Microsoft? Rap music? The milk crate?

Actually, it's the baseball cap. There is nowhere on earth, from Mongolia to Sudan to the remotest Amerindian settlement, where you will not find somebody  wearing a baseball cap.  This practical, durable and inexpensive piece of apparel has made its way into virtually every continent and culture.

Not to turn this column into a shopping mall, but I invite you to show your patriotism by purchasing a stylish new Ask the Pilot baseball cap. Please visit the ATP home page for details and pricing.