What Sarah Palin forgets (or never knew) about Ronald Reagan

She warbles a macho fantasy about our 40th president. But the real Reagan wanted a world free of nuclear arms 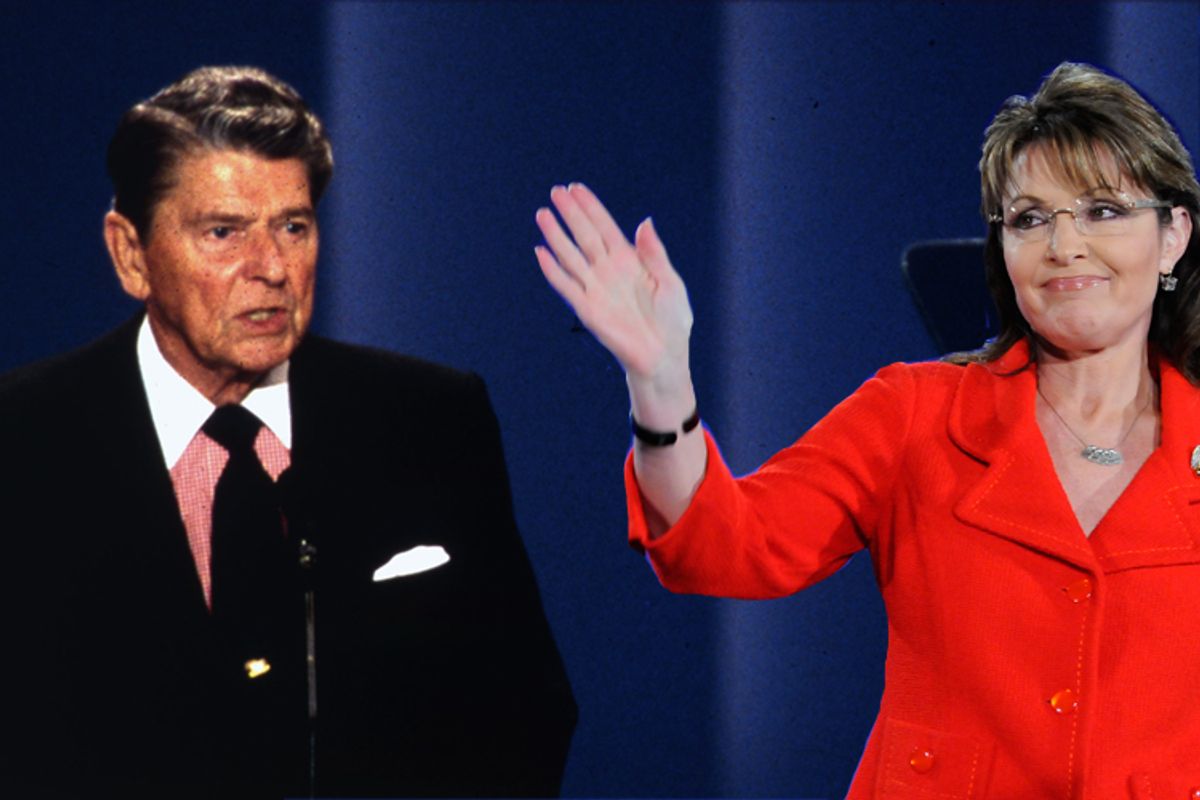 Listening to Sarah Palin, it is often difficult to determine whether her remarks demonstrate ignorance or dishonesty. She frequently waxes on about Ronald Reagan, for instance, revered ancestor of today's far right, whose real record bears little resemblance to the fantasies of extremists like her.

While attacking President Obama's nuclear weapons policies the other day -- and the strategic arms reduction treaty that he signed with Russia -- Palin said, "We miss Ronald Reagan, who used to say, when he would look at our enemies, he would say: 'No. You lose. We win.' That's what we miss. And that is what we have to get back to."

Now, Palin usually sounds bereft of even the most basic knowledge of history, let alone diplomacy, but in this case she had already graduated from college by the time Reagan decided to encourage peaceful change in the Soviet Union and rid the world of nuclear weapons entirely. In other words, she might be expected to remember those events, however vaguely, without reading a book.

Reagan's utopian aspirations were never achieved, of course, but the elimination of nuclear weapons was certainly what he proposed, more than once, in negotiations with Soviet leader Mikhail Gorbachev. The actual history of the Reagan era is worth recalling for the edification not only of Palin but of the many right-wing politicians and commentators who blather on in the same clueless (or disingenuous) way.

Beginning in November 1985, at a meeting in Geneva, Reagan and Gorbachev sought to slash nuclear weapons stockpiles in the U.S. and the Soviet Union by 50 percent or more. A year later they met in Reykjavik to discuss proposals to completely eliminate nuclear weapons from the arsenals of both nations. The U.S. president's approach was so radical -- and radically sincere, according to everyone close to him -- that it alarmed many of his more conservative advisors. His hawkish defense secretary, Caspar Weinberger, was appalled. Relieved when the Reykjavik talks ended without agreement because of a fundamental disagreement over missile defenses, the hawks were disturbed, to put it mildly, when Reagan and Gorbachev signed the Intermediate Nuclear Forces Treaty in 1987.

The INF treaty was truly historic, both because of its own deep cuts in the superpower arsenals and because of its symbolic portent of the imminent end of the Cold War. No treaty between the U.S. and the USSR had been signed and ratified by the Senate for 15 years by then -- and this agreement stipulated the drawdown and destruction of nuclear weapons by both sides for the first time ever.

Morever, at a moment when conservative opinion widely distrusted Gorbachev and urged Reagan to maintain bitter antagaonism toward "our enemies," he employed summitry and arms negotiations to reassure the Soviets that they could pursue liberalization without fear. It was a decisive moment in world history and one for which the intuitive president deserves great credit.

Reagan's bold decision to cultivate Gorbachev and promote détente required him to dismiss the reflexive stupidity of his own base. Reaction from the right was almost unanimously negative: National Review and Human Events broke with him over the INF treaty, while Commentary accused him of pursuing "nuclear disarmament measures far more sweeping and radical than even many arms control proponents deem advisable." George Will denounced him for "the moral disarmament of the West by elevating wishful thinking to the level of political philosophy." Various Republican politicians, including Senate leader Robert Dole, R-Kan., declared that unlike the president, they did not trust Gorbachev.

And the Sarah Palin of that time -- a photogenic young Republican senator from Indiana named Dan Quayle, who later became vice-president -- warned that the INF treaty would lead to "the gradual neutralization of Europe through de-nuclearization." Sounds like a phrase that could have been written for him by William Kristol, who later served as "Quayle's brain" in the first Bush White House, and reportedly has served the same mental function for Palin (with equal lack of apparent benefit).

A boiling zeal to discredit Obama as dupe or traitor has led critics on the right to falsify the content and implications of both the START treaty and the Nuclear Posture Review. Their lying necessarily includes a distorted account of the Reagan presidency -- very much in the old Soviet style of making inconvenient history disappear. But facts are stubborn things, as the Gipper once quipped, and the undeniable fact about Palin's sainted idol is that in his approach to nuclear disarmament, he was closer to Barack Obama than to belligerent kooks like her.