As the mom of an international adoptee, I'm saddened by the Russian adoption story -- and outraged by the coverage 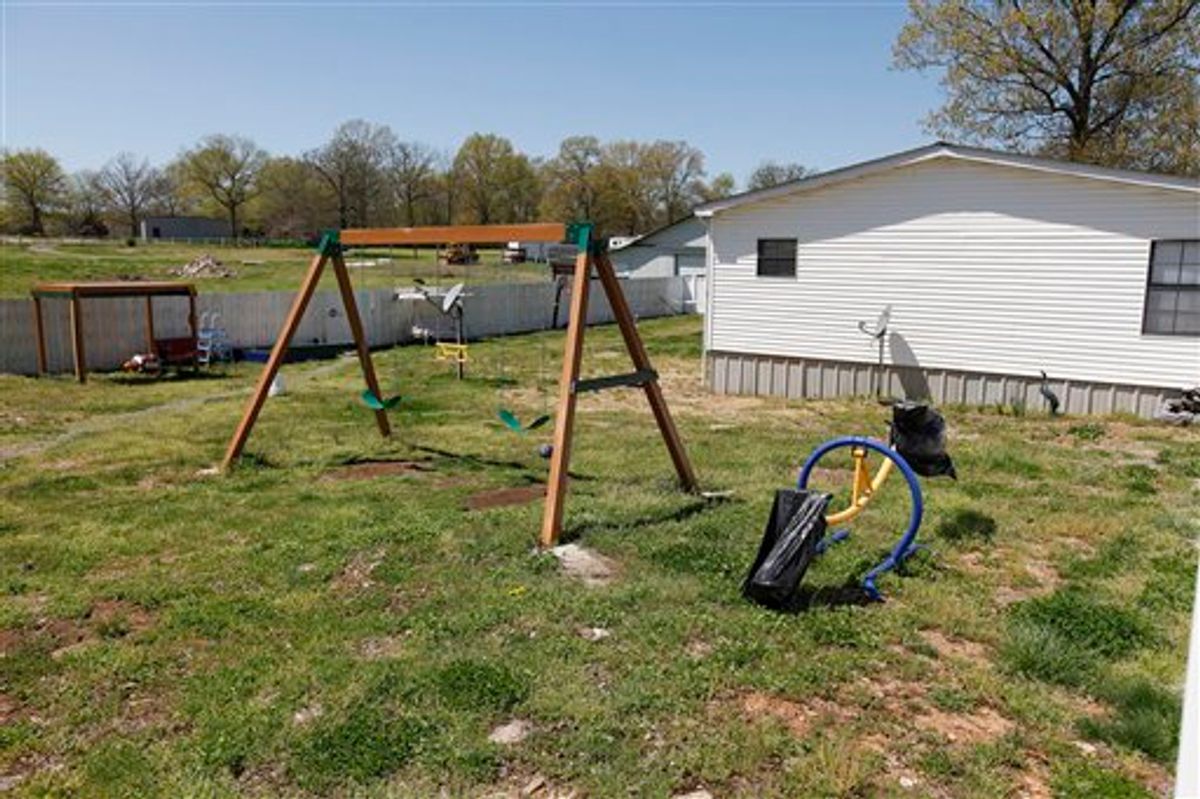 A swing set is seen in the backyard of Torry Hansen and Nancy Hansen's shared backyard in Shelbyville, Tenn. on Friday, April 9, 2010. Russia has threatened to suspend all child adoptions by U.S. families after a 7-year-old boy adopted by a woman from Tennessee was sent alone on a one-way flight back to Moscow with a note saying he was violent and had severe psychological problems. Artyom Savelyev was put on a plane by his adopted grandmother, Nancy Hansen. (AP Photo/Josh Anderson) (AP)
--

When I first saw the pictures of 7-year-old Artyom Savelyev -- who is close to my son's age -- in Moscow, after his adoptive grandmother put him on a flight from Washington, D.C., by himself, I wondered what the hell is wrong with us.

Who is "us"? That's the question. American adoptive parents? Not most of us, by any stretch. The American adoption agency involved, which has now had its license suspended by the Russian education ministry? Again, that's painting with a broad brush. The Russian orphanage in which by some reports the boy was mistreated? Who knows?

I wanted to blame somebody, though, as did the many commenters on news stories and blogs about Artyom's fate this past weekend. Adoptive mother Torry Hansen and grandmother Nancy were right at hand, courtesy of the AP. Here are a few comments about the story from Lisa Belkin's Motherlode blog:

"This is totally unconscionable and irresponsible."

"This woman's (I cannot say 'mother's,' for she doesn't deserve such a title) behaviour is despicable."

"This article made me cry. It takes the patience and endurance of Mother Theresa to deal with special needs children. Where did this woman not understand the commitment to a young, troubled child that she adopted into her family?"

If you haven't heard the story yet, last week, Nancy Hansen decided to fly Artyom (called Justin by his adoptive family) back to Russia because his violent behavior had become too much for them. According to one of the AP stories, his grandmother "chronicled a list of problems: hitting, screaming and spitting at his mother and threatening to kill family members."

Back in Russia, he was accompanied by a note from adoptive mother Torry Hansen, who is a registered nurse: "This child is mentally unstable. He is violent and has severe psychopathic issues … I was lied to and misled by the Russian Orphanage workers and director regarding his mental stability and other issues ... After giving my best to this child, I am sorry to say that for the safety of my family, friends, and myself, I no longer wish to parent this child.''

As of Friday, Russian foreign minister Sergey Lavrov was threatening to suspend all U.S. adoptions, calling this "the last straw."

Grandmother Nancy says she had no idea she was setting off an international incident. She did tell an AP reporter, "The intent of my daughter was to have a family and the intent of my whole family was to love that child."

I hate stories like this, in which a child becomes abandoned over and over again, unwanted by anyone. I hate what this does to me as an adoptive parent of a son born in Vietnam, of the doubts I start to feel about whether I had any right to everything that my family means.

I'm also waiting for more facts. The problem, as usual, is that a media storm has managed to make the situation even murkier, spreading an array of misinformation about international adoption, attachment disorders, and what constitutes "normal."

Shocking headlines like "Boy from Russia said 'he'd torch our home'" and "Grandmother: Boy terrified adoptive kin" keep the focus on extreme behavior. Here's the blurb that introduces the AP report in the Seattle Times: "Torry Hansen was so eager to become a mother that she adopted an older child from a foreign country, two factors that scare off many prospective parents. Her fear came later."

A distorted look at "the inside story of adoptions that go horribly wrong" aired on ABC's "Nightline" Friday, including videos taken by parents of children having "meltdowns." (Click here for the accompanying article.)

This prompted developmental psychologist Jean Mercer to debunk some myths in a Psychology Today blog. She rightly castigates "Nightline" for running home videos without questioning the parents' interpretations. In one case, shortly after a pair of Russian sisters had been adopted, the older sister wanders around her American home in tears, clutching a blanket, and crawling under furniture. As Mercer notes,

"[T]he parents seem to have regarded it as such bizarre and unacceptable behavior that it needed to be recorded because no outsider would believe it.

"But what do we actually see in this video of a child who has been in the adoptive home for about a week? Let me just inquire how similar it might be to your own behavior, if you had been taken by very large people who spoke a different language, put on an airplane with little comprehensible explanation, and taken far away to a new house, new food, new ways of doing things? Would you be grateful?"

Meanwhile, it's important to keep the numbers in perspective. According to the U.S. State Department, there have been about 15,000 U.S.-Russia adoptions in the past five years. I've heard that in the last 15 years, it's about 50,000. As many adoption experts have noted, most of these don't go "horribly wrong."

Whether Artyom is really psychopathic and violent is unclear. Even if it were true, shoving him onto an airplane is at the very least an act of ignorant desperation. Giving him an American name when he was already 6 years old indicates a lack of awareness and empathy. The Hansens -- not to mention those parents supplying videos of their children for "Nightline" -- appear to have little understanding of what it means to suddenly land in another culture.

Yet something much larger is at play than the actions of two unfit adoptive family members. Based on the official outrage of Russia -- following the travesty of American missionaries trying to hustle Haitian "orphans" out of that country after the recent earthquake -- the practice of international adoption is once again under fire.

There are lots of ethical reasons why it should be. In Haiti, a number of the children involved still had biological parents. In many other developing countries, from Vietnam to Ethiopia, there's always been the risk of money paid for babies to finance a less than savory adoption industry.

Yet there's the flip side, too, and you see it in Russia and Haiti: social welfare systems that simply are ill-equipped and far too under-funded to support the rolls of abandoned children. What you see is poverty and its brutal impact on society's most vulnerable -- children who receive little or no adult care.

Let me say it again: You see poverty, on a global scale, ramped up by the churn of developing economies. The Harvard University Project on Global Working Families, research that surveyed 55,000 people in a variety of countries and is detailed in Jody Heymann's book "Forgotten Families," makes clear that many children have no one to take care of them. Here's a quote from my own 2007 review of Heymann's book in "Women's Review of Books":

"Of the working parents interviewed, nineteen percent in Vietnam left their children alone or in the care of an unpaid child; 27 percent did so in Mexico; and a whopping 48 percent did in Botswana, which has almost no publicly funded child care."

Even the reference in a USA Today story about Artyom -- "United Airlines allows unaccompanied children as young as five years old on direct flights. Children age eight and above can catch connecting flights, as well" -- chills me.

So maybe we should blame global capitalism and every one of us (that "us") who participates. Maybe it's not just the Hansens of Shelbyville, Tenn. Maybe we should blame general ignorance about international adoption -- for example, the various media commentators ranting about the numbers on the rise when in fact they've been in steep decline since 2004.

Our son was a baby when we adopted him from Vietnam, from an orphanage in which he seemed very well-treated by affectionate staff. He is now a happy and healthy little boy. I say this not to vaunt my own skills as a parent but to add that even my son, who remembers nothing of the orphanage -- an orphanage that was far from a horror show -- has occasional meltdowns. When he was just a little younger than Artyom, he would cry uncontrollably when I left him at school. My son still sucks his thumb, though he's working on it.

Loss experienced by young children can be profound and impossible to process rationally. The fact that my mother was hospitalized when I was 6 still sits in my soul. Sometimes I believe my own loss has helped me to understand my son's; other times, I think that all humans walk alone.

In my adoptive family, some days we walk in the light. We are together, we are whole. But have we really become a world in which so many children have no safe homes?

Apparently so. At this moment, all I can do is hug my boy close.