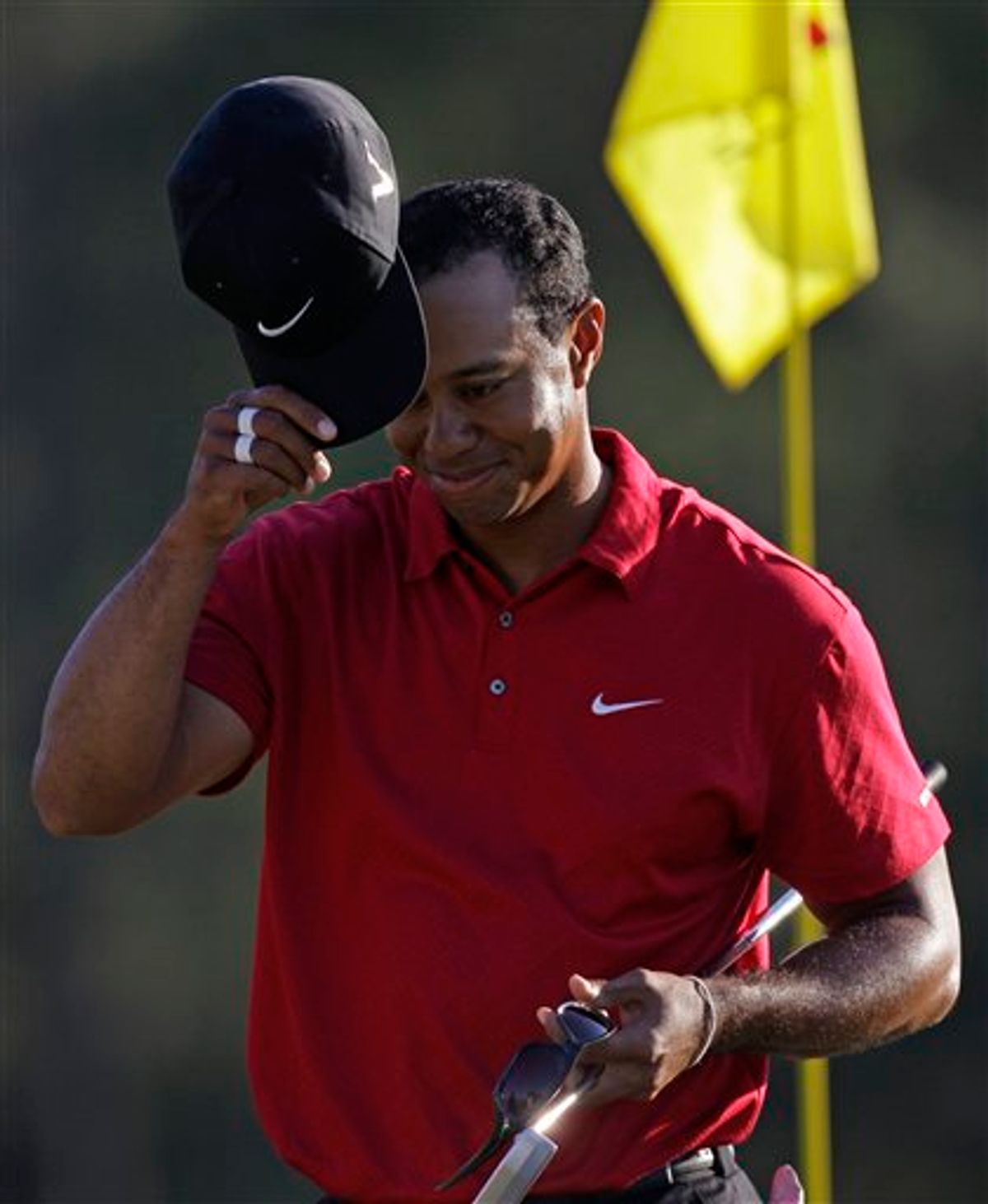 Phil Mickelson may have deserved to win the Masters on talent and guile. But his lack of cursing, his dogged determination to only screw his wife (unlike a certain fourth-place finisher) -- these are qualities that allowed Lefty to don green. Don't forget his wife's breast cancer, either. That story has been seriously underplayed.

Sportswriters flock to morality narratives -- they don't want to write that outcomes result from a combination of physical prowess and sheer luck. Hero X "wanted it more," or at least had better character. What else could explain a man's staggering ability to best put a ball in a hole? Steroids? It's got to be the virtue, and in this case, it's got to be the nuptials.

I declare the Masters fallout a first for America: This marks the day sports media celebrated an athlete's matrimonial success at the expense of his rival's. Call it ecstatic putt-putt tut-tut. Here's a reaction rundown:

• The Boston Herald's Ron Borges wants you to know about Phil's "reward": "The guy in the black cap and the white hat won the 74th Masters yesterday not by being spectacular but by being steadfast."

Borges undersold Mickelson's great play (and "watermelon balls") at the expense of overselling his "heroism." Since when did having a good marriage equal heroism? Is it time to reevaluate steadfastly faithful George W. Bush? Can Bill Clinton be post-presidentially reimpeached?

• Don't shoot the messenger when the NYT says: "Family Values Become a Focus at Augusta."

You're allowed to vomit on him, though.

• Tim Kawakami of the San Jose Mercury News: "It's an oversimplification, but measuring Mickelson's family situation against Woods' behavior toward his wife (who was not attending) is natural at this point."

Yes, and let us build on our recent, bizarre premises. It will only hasten the People magazine-ing of sports entertainment. Kawakami's merely stating the obvious, but that in and of itself is troubling: Why is it "natural" to compare the marriages? Is this America's new reality show?

• The AP's David Bauder got huffy regarding TV's conspiracy to cover up Tiger Woods' personal life: "The networks acted under the assumption that you knew all of that coming in, and if you wanted to hear more, you could turn elsewhere. Indeed, a celebrity Web site was reporting on the whereabouts of Woods' estranged wife just as the golfer was making that walk."

Yes, why didn't Jim Nantz just track Elin Nordegren down and scream questions from a golf cart parked on her lawn? CBS's inclination to focus on golf didn't trick hall monitor Bauder, who sarcastically spat: "[Tiger's hiatus] was time spent away. It wasn't a life spent in the bunker as examples of boorish behavior kept spilling out."

It's incredible that this story is from the Associated Press and not the Deseret News Op-Ed page.

• The best sentence came from USA Today's Michael Hiestad: "Mickelson, who appeared in an ExxonMobil TV ad just before he walked onto the 18th green Sunday, was the perfect feel-good winner."

It feels warm, fuzzy and oily all at the same time. And no, that's not a Tiger joke.

UPDATE: We have a winner: ESPN’s Rick Reilly blurts “Mickelson's win a victory for women”: “It's not often women win the Masters, but they did Sunday.”

Hey ladies, you won! And who better to announce your great achievement than a sanctimonious male golf writer? If you can stomach the following quotes you can probably mix cement in that gut:

"For millions of women around the country, it must feel like a lipstick-sized victory."

"Mickelson, in case you forgot, is the guy who stayed true to his wife."

"You don't know how dispiriting it is to come home after a long day to a strange, empty house. Come to think of it, maybe Tiger knows."

Come to think of it, maybe divorced men shouldn't wax saccharine about how marriage reveals character. Also, how does Rick know all about how "true" Mickelson stayed to his wife? And what the hell does "lipstick-sized victory" mean?