My abortion, their political ploy

While Obama signed away women's rights, I recovered from the hardest decision I've had to make 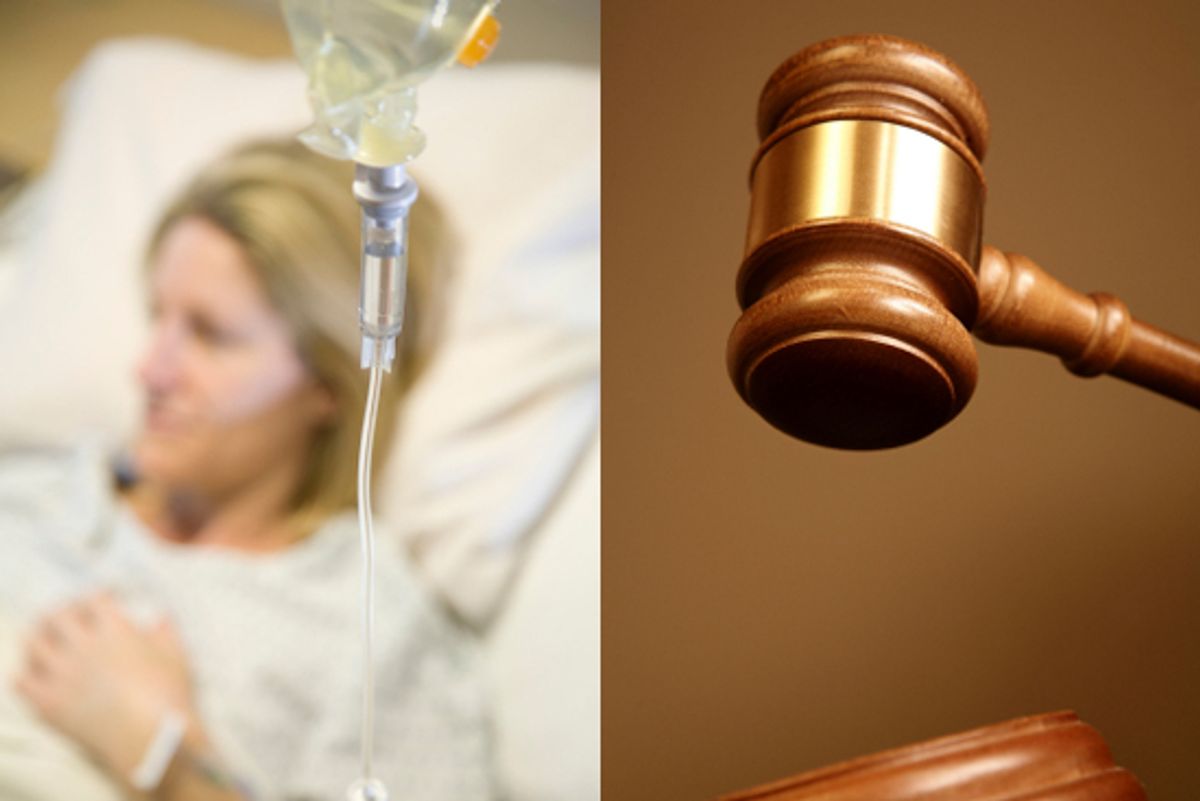 Last month, while President Obama quietly signed an executive order reaffirming that no federal funds can be used for abortion, I was alone in bed, waking from a fitful, 18-hour sleep, if you can even call it that. There were dried and fresh tears on my face. I was wearing a Maxi-pad that felt like a diaper and was spotted with blood. My breasts were swollen, painful to the touch. The sharp cramps in my uterus were crippling and unrelenting. I was nauseated, dry-heaving despite an empty stomach, nearly incapable of taking the medication and antibiotics necessary to quell the pain and stave off infection.

The day before, on Tuesday, March 23, I had an abortion.

The procedure was not cheap, $450. A financially devastating sum for a freelance writer whose earning potential has been decimated by bloggers and budget cuts. I have health insurance. It's egregiously expensive, all that I can afford, with a high deductible that renders the plan useless unless I get hit by a bus. Filing for reimbursement was not an option.

If this was just about money then perhaps I could set aside my frustration, anger, sadness and resentment over the ban in the name of compromise and a long-overdue, desperately needed overhaul of our nation's healthcare system. I imagine this is how President Obama, who campaigned as a pro-choice president, rationalized his signature. But this is not just about money. It's about becoming a concession in a public and political debate that was, and continues to be, devoid of the inherently private physical and emotional realities of having an abortion.

Not long ago, Minnesota Gov. Tim Pawlenty announced that April was "Abortion Recovery" month. Abortion recovery: What the hell does he know about that?

I am single, 34 years old and had never before been pregnant. I've wanted children ever since I can remember. This is wildly known among my friends and family, to whom I'm a beloved aunt, godmother and preferred baby sitter. For the past few years, I've been increasingly preoccupied with my biological clock and lack of serious boyfriend or partner. That fact, along with my age, and a long-standing bout with ovarian cysts had left me convinced it might no longer be possible.

Then, in February, I had sex with a good friend, a former lover, whom I was visiting for the weekend. It was lovely and innocuous. A much welcomed, even needed respite from an involuntary sexual hiatus and a visceral kind of loneliness.

Four weeks later, the pregnancy news left me in shock, hysterical, instantly isolated and alone. Although, according to the ubiquitous "they," there is never a perfect time to have a child, for me, this was definitely not the right time, not even close.

I'd recently been on a hefty dose of pregnancy-unfriendly antibiotics and had taken a series of pain meds for my back. I'd been drinking too much and smoking cigarettes. Although both had magically lost their appeal a few days before I received "the news," the damage had been done.

Still, I considered it, imagined a future with a child and without a partner. What if the child were born healthy? What if he or she were born with defects that I, albeit unwittingly, caused? How would I support us? Where and how would we live? There was not a scenario that I didn't run through, each one terrifying, impossible, sending me deeper into a black hole from which I've yet to fully emerge.

I scheduled my "procedure" for March 23, two weeks to the day after I found out I was pregnant. "You can always cancel," said the clinic and my doctor, who, after telling me I was pregnant, discussing my options, and diagnosing me with a bacterial infection, prescribed "pregnancy-friendly" antibiotics.

If I was going to go through the abortion, I had to be far enough along to minimize the risk of complications. So, for two weeks, I mostly hid. During this time, my hormones, taste buds and olfactory system turned against me. It seemed my body was revolting. My back hurt. My breasts hurt. I had severe cramps. I couldn't eat. I could barely keep down water. My weight, already on the low side, was quickly dropping. My mood was, and continues to be, erratic. I'd try to proceed with plans, then would feel sick and have to run home after making up lie (stomach virus, food poisoning, hangover) after lie to friends and family.

After knowing for a little less than a week, I told a few trustworthy friends, seeking advice, sounding boards, and a little familial affection, since I wasn't ready or able to tell my family. I didn't want this to be the way any of them, particularly my mother, remembered me saying "I'm pregnant" for the first time.

I quickly learned that getting unintentionally knocked up at my age, and being friends mostly with women my age who are new mothers, expectant mothers, or, like me, single and struggling with baby lust, makes me, and my pain, largely untouchable. The two new and expectant mothers I told pushed prenatal vitamins. The two single and childless ones were as I imagine smokers to be around cancer patients, avoiding physical and emotional contact. If I don't acknowledge this, it won't happen to me.

Eventually, I called the baby's father. He drove to town from his home out of state. He was ready to move in with me, get a steady job, co-parent, be the best kind of friends that we are since, according to him, "marriage never works anyway." He's divorced. "Maybe this is the excuse I needed to settle down, stop living like a nomad," he said. It was not the response I'd predicted. But I didn't want to to be his "excuse" for a major life change. That wouldn't work for me.

The state of Texas, where I live, didn't make my decision any easier. The "Women's Right to Know" Act, passed in 2003, requires pregnant women to listen to a detailed description of where their baby is in its development stage before they are allowed to go through with an abortion. I did that on the phone, while sitting alone in the corner of my room. It was a man's prerecorded voice telling me that, "The lungs are beginning to form. Brain activity can be recorded. Eyes are present, but no eyelids yet. The heart is more developed and is beating. Early reflexes develop. The hands and feet have fingers and toes, but may still be webbed. The length is less than one quarter-inch."

A girlfriend who'd had an abortion before went with me to the clinic. A cluster of female "pro-lifers" accosted me in the parking lot when I arrived. "First Amendment rights," said the receptionist. I call it harassment. Sanctioned abuse.

In contrast, the nurses and counselors at the clinic were as kind as any group of strangers or even friends could be. There were dozens of forms to fill out. Then the intake nurse performed a vaginal sonogram. She was sympathetic and nurturing, assuring me that, if I wanted, I would have kids one day, when it was the right time. She didn't make me look at the sonogram image, though I forced myself to glance up at the photos during my pre-procedure mandated counseling session. It was heartbreaking. Still is. I was five weeks and five days pregnant.

The procedure was excruciating and scary. The pixie of a doctor's aid gave me an IV with a concoction of painkillers, a gas mask and earphones -- the procedure is also torturously loud. And then the procedure, which felt like it lasted forever, but I'm told lasted only five minutes. Even with the drugs and the gas the pain was agonizing. My friend stayed with me, holding my hand and wiping away my tears. Then the nurse dressed me and helped me up and into the recovery room. My blood pressure was low. The nurse in the room gave me water, prescriptions and a list of dos and don'ts -- do take your meds, don't exercise, lift anything more than 15 pounds, use tampons, have sex, take baths until your follow-up appointment. She sat me in a comfortable chair, gave me a heating pad and kept asking me where my pain was on a scale of 1 to 10. First a 7, then a 5, then a 3, then she let me go. I was too bleary, too sad to respond to the women accosting me in the parking lot. I wouldn't even wish this predicament on them.

My friend drove me home, picking up my meds along with way. I then slept for 18 hours. I'm sure I woke up for a few minutes here and there. I vaguely recall seeing a friend's face, hearing another's voice, feeling the man who would not be the father of my child petting my head. Tears rolled out of the sides of my eyes. There were the cramps, an incessant pain in my back. I think I swallowed pills. Antibiotics. More pain meds.

Then it was Wednesday. I woke up feeling damaged, empty, scared, guilty and in pain. The terms "pro-choice" and "pro-life" were emanating from the TV screen. They sounded reductive, glaringly inadequate. The word "abortion," fraught with shame and accusation, was being bandied about for pieces of political theater. The words "baby killer" were omnipresent, too. Although I didn't feel like a baby killer, like I'd killed my baby, I did feel partially dead.

Now, weeks into my recovery process -- I’m still bleeding, cramping, underweight, emotional, grappling with my need for children and a partner with whom to raise them -- I see my experience grossly manipulated by Pawlenty, a man who doesn’t, can’t, know how I feel. But it’s always like this, the moralists and proselytizers stealing the microphone because I, and millions of other women, didn’t make the choice they prescribed.

Just as no one wants to get the flu, diabetes or even cancer -- though people still leave their homes, eat junk food, and smoke -- no woman wants to experience an unplanned pregnancy. But it happens. Each year, almost half of all pregnancies among American women are unintended. When I was pregnant, I'd never before so desperately needed affordable healthcare and services, often two very different things. And I'd never felt more like I didn't deserve them. But when it comes to our health, who deserves what isn't, or at least shouldn't be, the point.