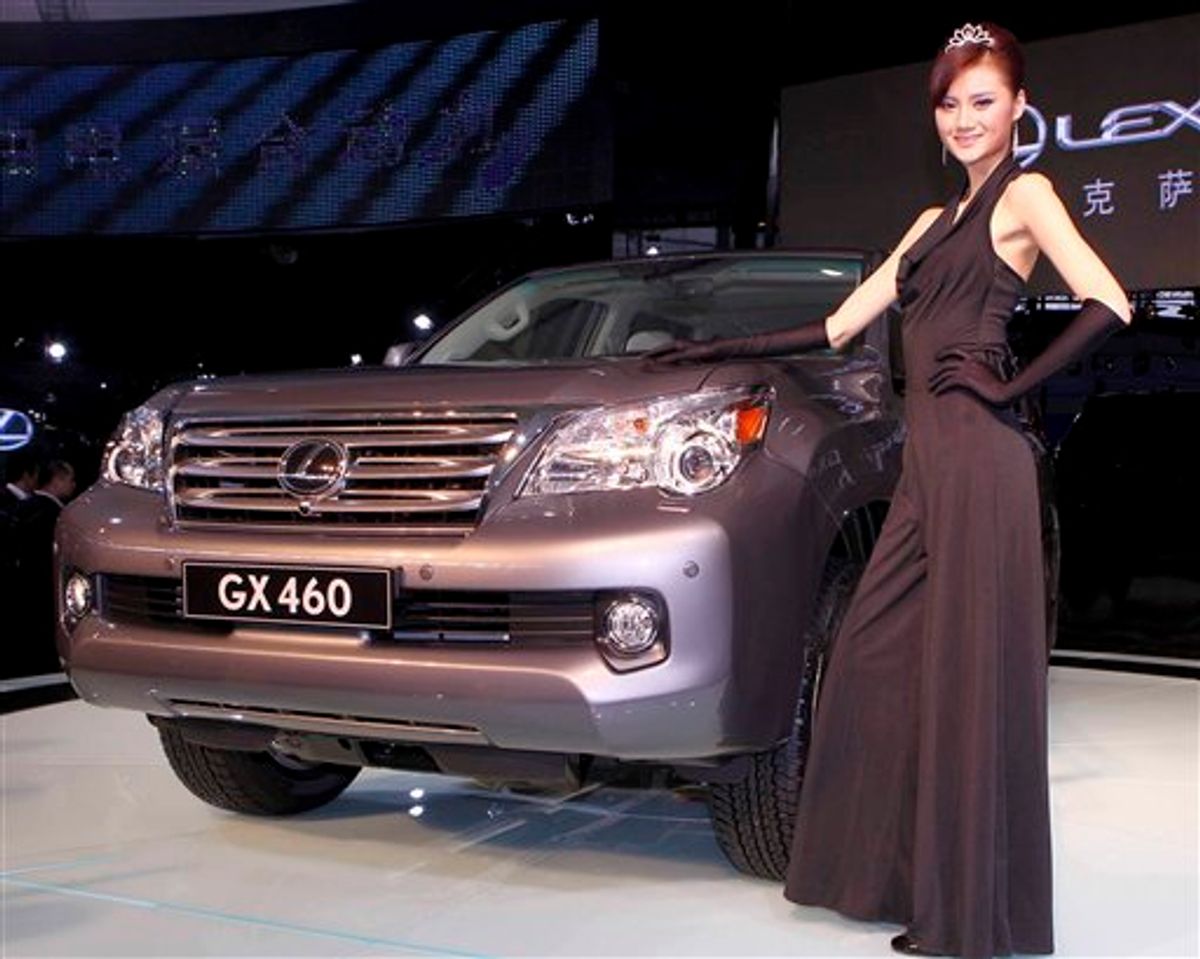 FILE -- In a Nov. 23, 2009 file photo released by the Xinhua news agency, a model presents a Lexus GX460 car during the 7th China International Automobile Exhibition in Guangzhou, Guangdong province, China. Consumer Reports has given the Lexus GX460 a rare "Don't Buy" warning, saying a problem that occurred during routine handling tests could lead the SUV to roll over in real-world driving. (AP Photo/Xinhua, Chen Jianli/file) ** NO SALES ** (AP)
--

Consumer Reports has given the Lexus GX 460 SUV a rare "Don't Buy" warning, saying a problem that occurred during routine handling tests could lead to a rollover accident in real-world driving.

In the latest blow to Toyota's reputation, the magazine said that during a test of the vehicle's performance during unusual turns, the rear of the vehicle slid until it was nearly sideways before the electronic stability control system kicked in.

Consumer Reports said in real-world driving, such a scenario could cause a rollover accident. As a result, the magazine has given the seven-seat SUV a "Don't Buy: Safety Risk" label until the problem is fixed.

"In a real world situation, by that time, the car can hit the curb or the side of the road and that's the situation where, in a vehicle like that, it could cause it to roll over," said Gabriel Shenhar, senior auto test engineer at Consumer Reports, who was one of four testers to experience the problem.

Consumer Reports said the last vehicle to receive such a warning was the 2001 Mitsubishi Montero Limited. It said among the 95 SUVs in its current ratings, no other slid as far as the GX 460.

In a statement Toyota said it is concerned with Consumer Reports' findings, adding that its engineers will try to duplicate the magazine's tests to determine its next steps.

"Please keep in mind that the 2010 GX 460 meets or exceeds all federal government testing requirements," the automaker said. "We take the Consumer Reports' test results seriously."

Starting at about $52,000, the GX 460 is a small-volume vehicle for Lexus, Toyota Motor Corp.'s luxury brand. It went on sale in November and only about 5,000 have been sold since then. But the warning represents yet another blow for Toyota's tarnished reputation for safety following recalls of millions of vehicles for faulty gas pedals. The GX 460 is not covered by the pedal recalls.

Consumer Reports said the problem occurred during a handling test on its test track. During the test, the driver approaches a turn unusually fast, then releases the accelerator pedal to simulate a typical driver's response. This causes the rear of the vehicle to slide.

In normal cases, the vehicle's electronic stability control should quickly correct the loss of control. But Shenhar said in the case of the GX 460, the stability control took too long to adjust, causing a risk of rolling over.

However, Consumer Reports said it is not aware of any reports of the vehicle rolling over. The magazine said it tested two separate vehicles, both of which experienced the problem, but neither rolled over.