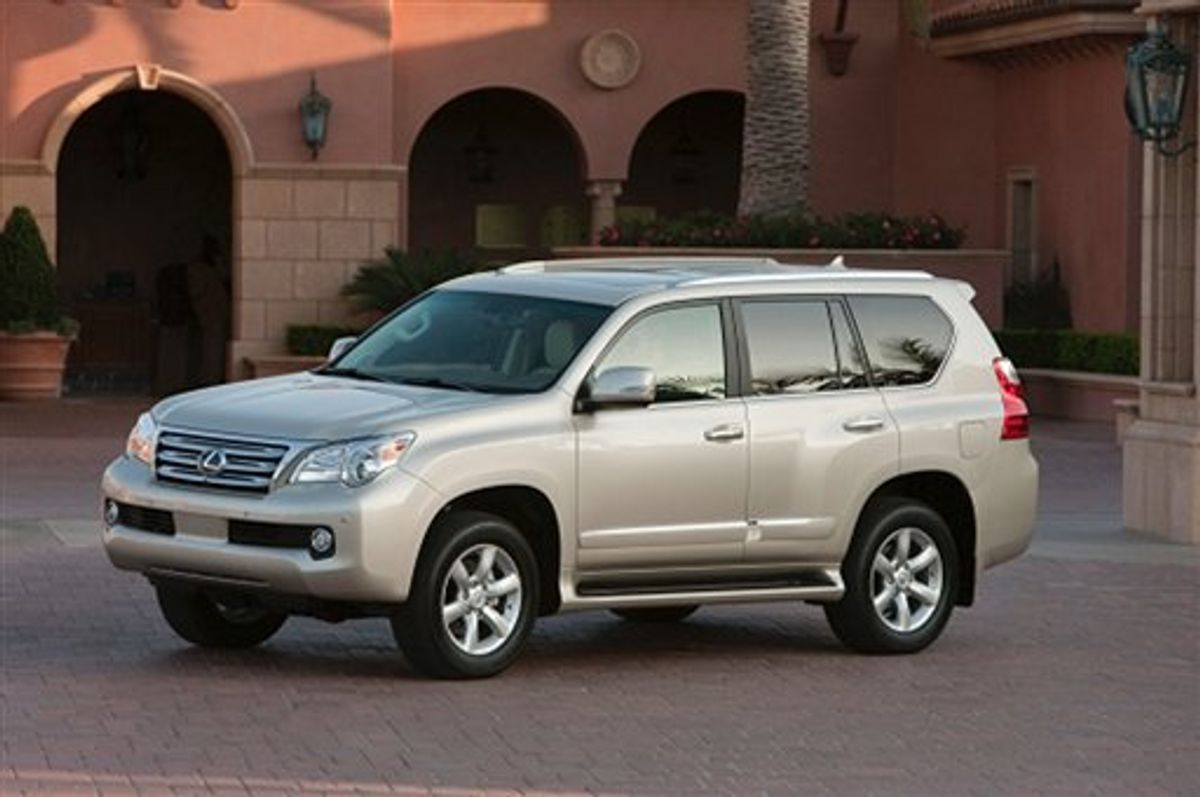 In this undated product image from Toyota Motors Corp., the 2010 Lexus GX460 is shown. Consumer Reports said Tuesday, April 13, 2010, it has given the Lexus GX460 a rare "Don't Buy" warning, saying a problem that occurred during routine handling tests could lead the SUV to roll over in real-world driving.(AP Photo/Toyota Motors Corp.) ** NO SALES ** (AP)
--

Toyota Motor Corp. is temporarily halting sales of the 2010 Lexus GX 460 after Consumer Reports issued a rare "Don't Buy" warning amid concerns the large SUV has handling problems that could cause it to roll over during sharp turns.

The Japanese automaker said Tuesday it had asked dealers to temporarily suspend sales of the SUV while it conducts its own tests on the GX 460.

"We are taking the situation with the GX 460 very seriously and are determined to identify and correct the issue Consumer Reports identified," said Mark Templin, Lexus vice president and general manager.

The decision to stop selling the SUV is the latest blow to Toyota's tarnished safety reputation after the recall of millions of cars and trucks over gas pedals that are too slow to retract or that can become stuck under floor mats. The GX 460 is not covered by the pedal recalls.

Toyota said about 6,000 have been sold since the vehicle went on sale in late December.

Consumer Reports is closely read by many car buyers before choosing a new car or truck. In January, it pulled its "recommended" rating on eight vehicles recalled by the automaker due to faulty gas pedals.

The magazine said the Lexus problem occurred during tests on its track. In a standard test, the driver approached a turn unusually fast, then released the accelerator pedal to simulate the response of an alarmed driver. This caused the rear of the vehicle to slide outward.

In normal cases, the electronic stability control should quickly correct the loss of control and keep the SUV on its intended path. But with the GX 460, the stability control took too long to adjust, which could cause a rollover accident if one of the sliding wheels were to strike the curb or another obstacle, said Gabriel Shenhar, Consumer Reports' senior auto test engineer who was one of four testers who experienced the problem.

The magazine said it is not aware of any reports of the GX 460 rolling over. It tested two separate vehicles, both of which experienced the problem, but neither rolled over.

The warning label on the model will remain until Toyota addresses the handling issue with the seven-seat SUV.

Templin said in a statement he was "confident that the GX meets our high safety standards" and said Toyota's engineering teams were testing the GX using Consumer Reports' specific parameters. Lexus will provide a loaner car for any customer who bought a 2010 GX 460 and is concerned about driving the vehicle, Templin said.

The "Don't Buy" label is unlikely to hurt Toyota's broader sales since the GX 460 accounts for a fraction of its total, said Erich Merkle, president of the consulting company Autoconomy.com in Grand Rapids, Mich. However, it comes at an unfortunate time as the automaker tries to move beyond the recalls.

"I think it will have a bigger impact from a negative-PR perspective than from an actual sales perspective," Merkle said.

The GX 460, which starts at about $52,000, is built on the same platform as the Toyota 4Runner. However, Consumer Reports said the problem did not occur during similar tests on the 4Runner. According to Toyota's Web site, both vehicles are about six feet tall but the GX 460 is about 3 inches taller.

Consumer Reports said the last vehicle to receive such a safety warning was the 2001 Mitsubishi Montero Limited, a large SUV. In that case, testers said the wheels lifted off the road during standard avoidance-maneuver tests, which also posed a rollover risk.

At the time, Mitsubishi disputed the magazine's findings and did not make any modifications to the vehicle, Mitsubishi spokesman Dan Irvin said. The designation appeared to have little effect on the Montero's sales, which increased overall during the second half of 2001.

The Montero remained on sale in the U.S. until 2007 and continues to be sold overseas as the Mitsubishi Pajero.