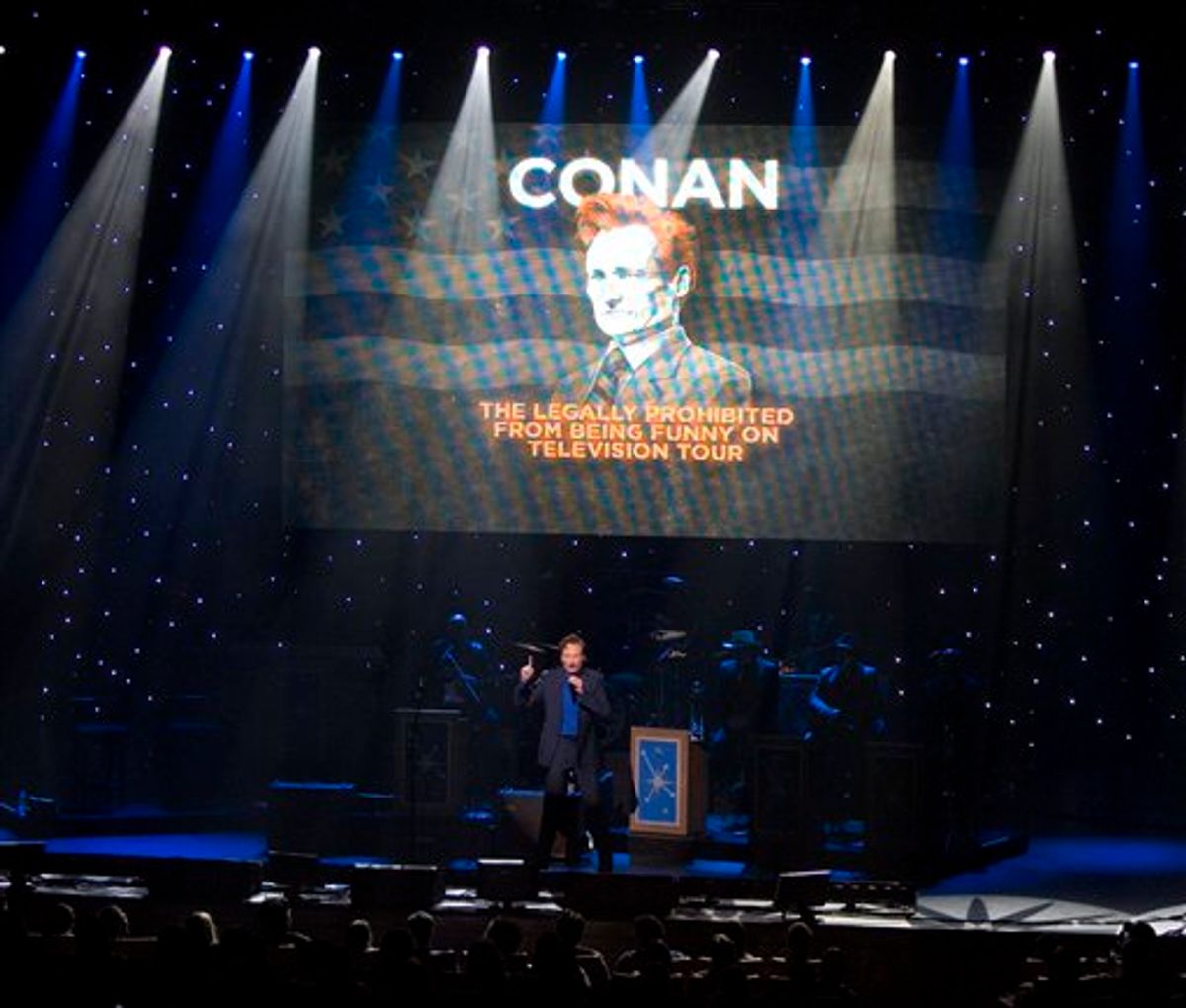 Former The Tonight Show host Conan OBrien performs at the Hult Center for the Performing Arts in Eugene, Ore., Monday, April 12, 2010. OBrien, who quit the show rather than host it at 12:05 a.m. after the return of Jay Leno to late night television, is kicking off his The Legally Prohibited from Being Funny on Television Tour in Eugene. O'Brien is expected to return to television in November on cable station TBS.(AP Photo/Don Ryan) (AP)
--

Conan O'Brien, fueled by three months of unused comedy energy, kicked off a nationwide tour that evoked his late-night brand of edgy humor and brought a college-town crowd to its feet.

"I'm not supposed to admit this, ladies and gentlemen, but I really missed the applause," O'Brien said Monday. "You have no idea how shallow I am."

His journey from "Tonight" to an out-of-work guy to a reborn stage performer was the centerpiece of the show, with a helping of familiar bits like Triumph the Insult Comic Dog, songs from a guitar-playing O'Brien with former "Tonight" band members and a handful of guests.

The gangly redhead worked the room hard, joking, dancing and even making costume changes that, at one point, included a pink leather outfit.

"This is the first time anyone has paid to see me. They've paid me to go away," O'Brien told the audience of more than 2,500, an obvious reference to the former "Tonight" host's $32 million exit deal with NBC.

O'Brien acknowledged that a new TV gig awaits him later this year: TBS announced Monday that he will host a four-day-a-week show at 11 p.m. Eastern time, perhaps starting in November.

"You may have heard I got a new job: new assistant manager at Eugene's Banana Republic," he wisecracked, later acknowledging the TBS job in a parody version of "On the Road Again."

The tour, once viewed as a way to generate interest in O'Brien for a late-night deal, now can serve to woo viewers to his new show and new network.

O'Brien tossed barbs NBC's way, showing short films in which he played a bald man who introduced himself as a "generic network executive," boasted about heading one of the top 17 networks and introduced a new series called "I'm a Celebrity and I Eat Bark."

Jeff Zucker, NBC Universal's chief executive, is clean-pated, and NBC's lineup includes "I'm a Celebrity ... Get Me Out of Here!"

O'Brien's sidekick, Andy Richter, is along for the tour, with Reggie Watts the opening act. Among O'Brien's debut show guests were the band Spoon and, from the NBC sitcom "30 Rock," cast member Jack McBrayer, who plays Kenneth the page. Other celebrities are expected to drop in throughout the tour, which heads to Vancouver, Canada, on Wednesday.

Although he fretted at the end that the evening was mostly about him, O'Brien turned his career crisis into crowd-pleasing jokes. He recounted the "eight stages of grief" after losing a talk show, which included "Blame myself," "Blame everyone else 'round me" and "36 hours of Red Bull and Halo."

He didn't spend much time on the self-blame phase, O'Brien said, "because what the hell did I do?"

The evening contained a sprinkling of four-letter words and raciness, but otherwise the show didn't venture much across the current broadcast TV line.

Audience members, who gave O'Brien a standing ovation at the beginning and end and laughs throughout, said he lived up to expectations -- even if they weren't quite sure what the show, titled "The Legally Prohibited From Being Funny on Television Tour," would include.

O'Brien's boundless, near-manic energy was at once impressive and worrisome: Can the rail-thin comedian keep this pace up for some 30 cities more?

He'll be testing himself in the Northwest and Canada before he hits bigger U.S. cities (Los Angeles, April 24-25; New York, June 2-3; the tour ends in Atlanta on June 14). With tickets priced from $40 and up, the tour is virtually sold out.