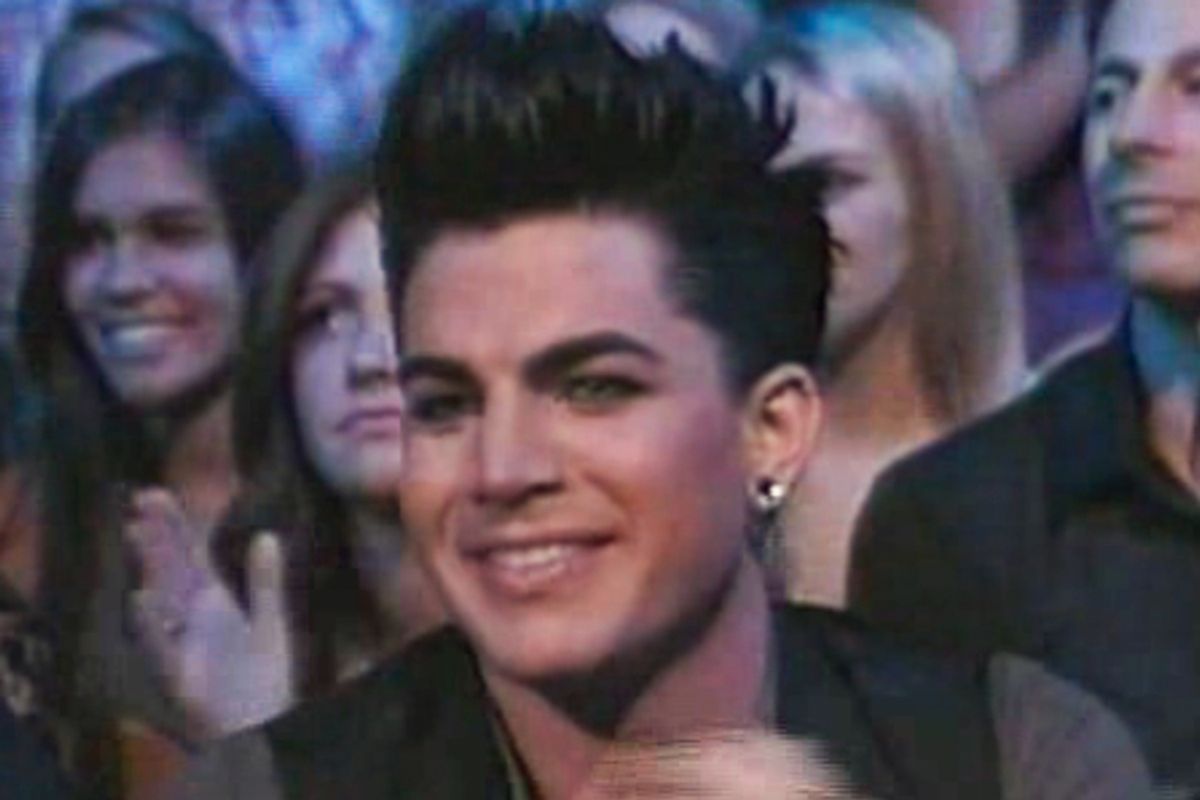 If he were alive, he would be 75 years old. But on this week's "American Idol," Elvis, the King of Rock and Roll, who remains dead, despite what conspiracy theorists would have us believe, was resurrected for one night only. (Unless, of course, you're in Vegas. There are a million Elvises every night in Vegas.)

As for Elvis week, it was as dead as Elvis.

But all was not lost. At least Adam Lambert was going to be the lucky contestants' mentor. I won't bore you with the ad nauseum details of what a ridiculously obsessed fanatical fan I am of Adam Lambert. What you should know is that Lambert was the first contestant ever to be asked to come back to be a mentor. He did a valiant job of trying to light a fire under the contestant's behinds. Not an easy feat with this sullen and hesitant group.

Lambert wasn't the only surprise on this week's "Idol." In a dramatic and unprecedented move on last Wednesday's results show, Big Mike was, surprisingly, at the bottom of the bottom three and in danger of being voted off. The judges came through and wisely decided to save him. The world heaved a sigh of relief. But that meant that two contestants would be voted off this week. The heat was on for the remaining nine.

First up was Crystal Bowersox. Lambert wisely encouraged her to ramp up her music by using an electric guitar and "letting her dreads down." Crystal stole Big Mike's thunder and sang "Saved." She took an Elvis song and "crystallized" it. She was strong, changed the tempo around, took charge, had lots of energy and made me forget there ever was an Elvis. Adam gave great advice.

Randy: "I'm a broken record. That's the way to give it up. Cool blues vibe. It was dope. It could have been the second coming of Bonnie Raitt.  I loved it." Randy feels like a broken record? I can so relate!

Simon: "What I loved about that was that you didn't choose an obvious song, you put your own slant on it and you didn't fall into the karaoke trap. Original, sounded great and, once again, congratulations."

Andrew Garcia: Lambert attempted to coach Andrew by being honest, a novel concept, as all past mentors have played it nicey-nicey, a strategy that has been helpful to no one. He told Andrew he was bored and encouraged him to get some life into the song.

Lambert's words fell on deaf ears. Andrew sang "Hound Dog," and I wanted to howl. In fact, once Andrew started singing, my dog started howling. Andrew sang with a Beatnik kind of beat, and I was left wondering who he sounded like, Elvis or Maynard G. Krebs? Andrew was also a little too preoccupied with his microphone, dragging it along like a reluctant lover. It seemed almost hostile.

Randy: "I hate to say this, but that was definitely not good karaoke." Is there any such thing as "not good karaoke"? Isn't karaoke, in and of itself, not good?

Ellen: "I wish you'd put a little more swagger into it. I thought you pulled it off." Ellen should stick with asking the audience who was having a birthday.

Simon: "Lazy and unpredictable. All of your coolness has been sucked out of you right now with this awful performance."

Tim Urban was next. Between you and me, I thought Adam had a crush. He used words like "pretty" and "lovely" to describe Tim's voice and guitar playing abilities. He was encouraging Tim to be more vulnerable. (I won't swear by it, but I think I saw Adam slip Tim his phone number.)

Tim sang "I Can't Help Falling in Love With You." Whoa! Elvis lives inside Tim Urban! Who would have thunk? Well, a slight exaggeration but at least Tim held the notes and didn't fall off the stool he was sitting on. One can always find something to be grateful for.

Simon: "You have managed to go from zero to hero in two weeks." Simon doesn't give a rip about this show anymore.

Lee Dewyze: Adam confronted Lee. "Your voice is great but there's nothing going on," he said. "Smile, be playful. It sounds awesome."

Lee sang "A Little Less Conversation" and wisely took Adam's advice to heart. He had a much-needed connection with the audience and great, sexy, raspy vocals.

Randy: "Yo, yo. Dude, you were in the zone. That was dope. Another great, amazing performance. Very good, dude." Randy sounded like he was celebrating 4/20 a little early.

Kara: "I've never seen you go for it vocally like you did tonight. You really went for it, and I saw an intensity I hadn't seen before. The vocal was fire. Get it a little looser."

Aaron Kelly: Adam was trying desperately to get Aaron to give the song more energy. "GRAB IT, AARON!  GET AGGRESSIVE WITH IT!" Oh, Lambert was being a naughty boy. Aaron looked uncomfortable and was last seen looking for Mommy.

Aaron sang "Blue Suede Shoes," and I cringed. Aaron tried desperately to be sexy and Elvis-esque, but how can Linus be sexy?  Maybe Aaron could get a spot on "Glee"…or "Sesame Street."

Ellen: "You chose the most iconic of Elvis's songs, and it was a big song. 'A' for effort." Ellen needs to become an elementary school teacher.

Kara: "You're out of your comfort zone, and I liked it. I really liked it." Kara was out of her mind.

Simon: "It was like someone at a high school doing a concert at the end. What's frustrating is that you didn't make it young and it was very karaoke." Simon was the only sane one.

Siobhan Magnus: Adam said, "She's got the pipes, but it felt sleepy to me. It needs a little fire, a little movement." Those two definitely had some competing crazy Elvis pompadour hair going on.

Siobhan sang "Suspicious Minds." The first half of the song was just odd, as she started off on the stairs, singing into the back of the stage. Her voice was great, but it sounded sluggish, like she was kind of over the whole "American Idol" and being judged thing. The second half was more vintage Siobhan, as she let those crazy, strong vocal cords loose.

Kara: "Two different voices are getting confusing to me. The first half was gentle, the second half, your voice was screaming."

Simon: "The first part was terrible, and when you hit the big notes later on, it sounded erratic and screechy. You've lost who you were two or three weeks ago."

Siobhan: "I don't think it's necessary to be labeled. I don't label myself." The crowd roared its approval, and I was confused. Was Siobhan being a rebel or a diva? You decide.

Michael Lynche: "In the spirit of Elvis, Michael could bring a little more of the storyteller out," Adam said. But Michael protested, saying that Simon had told him he was too theatrical.  Who would Big Mike listen to?

Big Mike sang "In the Ghetto." I enjoyed his gospel/bluesy rendition of the song. Big Mike was tough and tender but forgettable, and that's what he got for listening to Simon.

Randy: "A little sleepy for me, but those were hot vocals. Hot! Hot!" Simmer down there, Randy.

Simon: "A million billion times better than last week. It was a terrific choice of song. Well done!" Simon was playing favorites.

Katie Stevens was angry and confused about the judges' feedback. Adam encouraged her to show that anger. "Let it out, sell it a little more, make us believe it!"

Katie sang "Baby What You Want Me to Do." There was something disturbingly old about Katie.She'd adopted that bobblehead motion of Kara's, and it was not a good look. And she never managed to come close to sounding angry. I loved Katie's voice. It was spectacular, but as a performer, I felt like she was faking it.

Simon: "For me, it was loud and a bit annoying. Again, I just didn't like the song very much. The other judges liked it, so it really doesn't matter what I think." Another clear sign of resignation from Simon.

Casey James' song, "Lawdy, Miss Clawdy," started abruptly, as if in mid-performance. It was  perfectly fine, but it was also amnesia-inducing. I would have loved it if he had sang, "Love Me Tender." But Kara may have gone all crazy cougar on us and made a spectacle out of herself. Oh wait, she's already done that all season long.

Randy: " I didn't see anything different but another solid performance."

Kara: "We know you have brilliance, and that wasn't." I told you he should have sang "Love Me Tender"!

Simon: "A wasted opportunity, but your vocal was good."

Let's face it. Watching season nine of "American Idol" is not unlike being a motorist who slows down to see the wreckage, death and disaster of a car crash. There's something morbidly fascinating about seeing all that destruction up close and personal. We are such an unevolved species.

So, Wednesday night there will be a double elimination. I can't tell you how much relief that brings me.

My top three: Crystal, Lee and Casey (in no particular order).

Bottom three:  Aaron, Andrew and Siobhan, with a fond buh-bye to Aaron and Andrew.

Poor Elvis. He was most likely rolling over in his grave. At this rate, I'll be joining him soon.