The implications of the latest Charlie Crist rumor

History is clear: If the Florida governor runs for the Senate as an independent, expect the unexpected in November 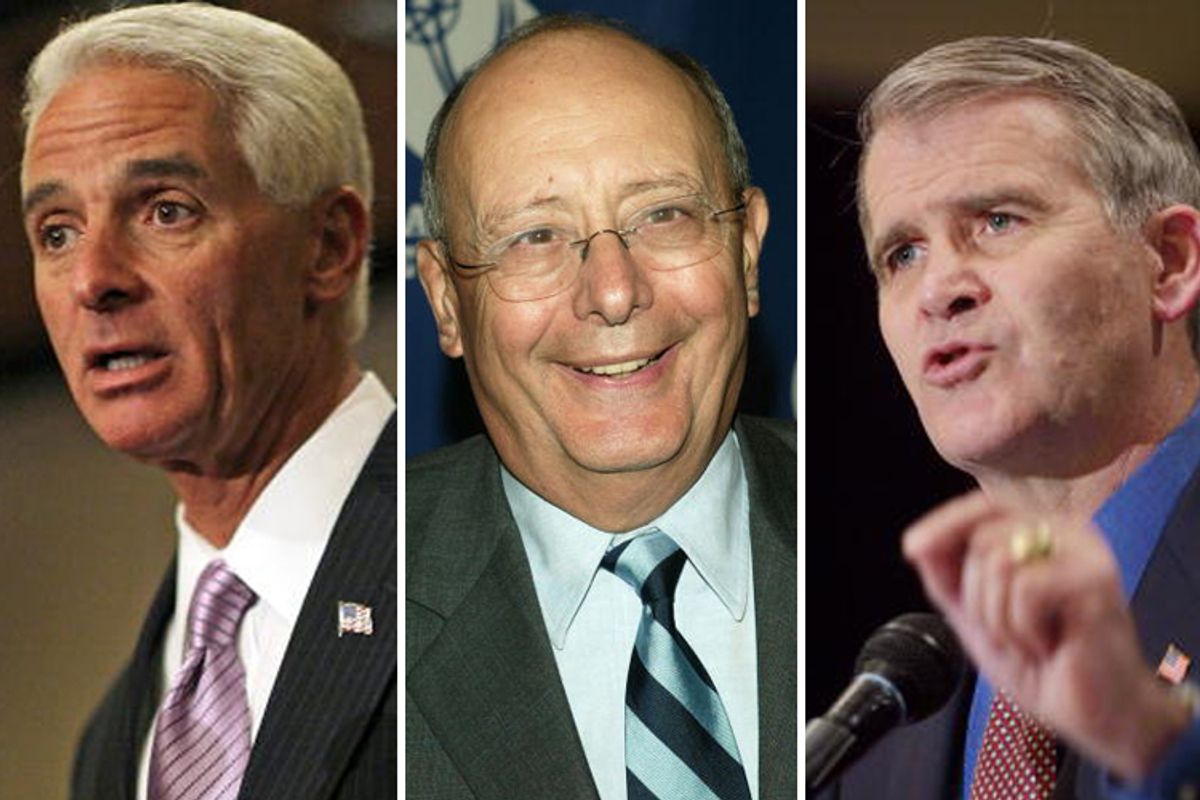 The rumor that Charlie Crist will give up on his bid for the Republican Senate nomination in Florida and instead run as an independent just won't die.

When the chatter picked up last week, Crist's campaign issued an emphatic denial, avowing that the governor "will not run as an Independent or No Party Affiliation" in the fall. Almost immediately, though, a new poll was released putting Crist a staggering 29 points behind his GOP foe, Marco Rubio.

Now comes word in Wednesday's Wall Street Journal that the third-party idea is back on the table. "If you were to put a gun to my head, I'd say he's running as an independent," an unnamed Crist advisor told the paper.

If Crist does pull the trigger (and he has about two weeks to decide), history suggests that he won't be able to win in the fall -- but that he could still have a decisive impact on the outcome.

The six most notable independent Senate candidacies of the (relatively) recent past can be split into two categories. The first group includes Bernie Sanders and Joe Lieberman (both in 2006) and Harry Byrd Jr. (in 1976), all of whom won as independents. The key for all three is that one of the major parties essentially rolled over.

In Lieberman's case, Connecticut's Republican establishment abandoned the party's official candidate, Alan Schlesinger, who finished with just 10 percent in November. By gobbling up the rest of the Republican vote, Lieberman was able to defeat Democrat Ned Lamont by a 50 to 40 percent score.

In Vermont that year, Democrats didn't even bother to nominate their own candidate, bowing to Sanders' popularity among the party's rank-and-file, and Sanders crushed Republican Richard Tarrant. And in Virginia in '76, the GOP declined to nominate a candidate to oppose the conservative Byrd, who then knocked off Democrat Elmo Zumwalt.

But Crist, if he does opt for the third-party route, won't belong to this class, since the GOP base will stay true to Rubio, and the Democrats already have their own weighty candidate, Rep. Kendrick Meek. This would make a Crist campaign similar to those waged by Thomas Dodd in 1970, Jacob Javits in 1980 and Marshall Coleman in 1994. All of them were credible enough to attract sizable support, but not enough to win. Instead, they all played the spoiler role.

Dodd, for instance, lost the Connecticut Democratic Party's support after being censured by the Senate for his personal use of campaign funds. He then mounted an independent campaign, which attracted just over 24 percent of the vote -- support that otherwise would have benefited Democrat Joe Duffey, who lost by 8 points to Lowell Weicker, the then-unknown GOP nominee.

Similarly, Javits' presence as the Liberal Party's candidate in New York in '80 plainly swung the election to Republican Al D'Amato (who had knocked off Javits in the GOP primary). Javits' core constituency -- Jewish and elderly voters -- overlapped with that of Democrat Elizabeth Holtzman, who lost to D'Amato by a 45-44 percent spread. In defeat, she decreed that D'Amato had "slipped through" and that without Javits in the race, "I think I would have won." No one disagreed.

And then there's Coleman, Virginia's former Republican attorney general, who pulled 11 percent in that state's '94 Senate election -- very possibly saving Democrat Chuck Robb, who held off GOP nominee Oliver North by 3 points. Initially, the contest had been a four-way race, with former Democratic Gov. Doug Wilder also running as an independent -- and disproportionately hurting Robb. But Wilder pulled out weeks before the election, another key factor in Robb's victory.

Early polling evidence is inconclusive on which candidate -- Rubio or Meek -- Crist would hurt more as an independent. In a Rasmussen survey last month, Rubio ran away with a three-way race, posting 45 percent to Meek's 25 percent and Crist's 22. The poll found Crist drawing about evenly from Republicans and Democrats. A second survey conducted last month, though, showed a tight three-way contest, with Rubio at 32 percent, Crist at 29 and Meek at 27.

Still, Democrats are more eager about the prospect of a Crist independent bid, simply because the outlook for Meek in a two-way race against Rubio isn't very bright. Anything that threatens to change that is good news for Democrats.