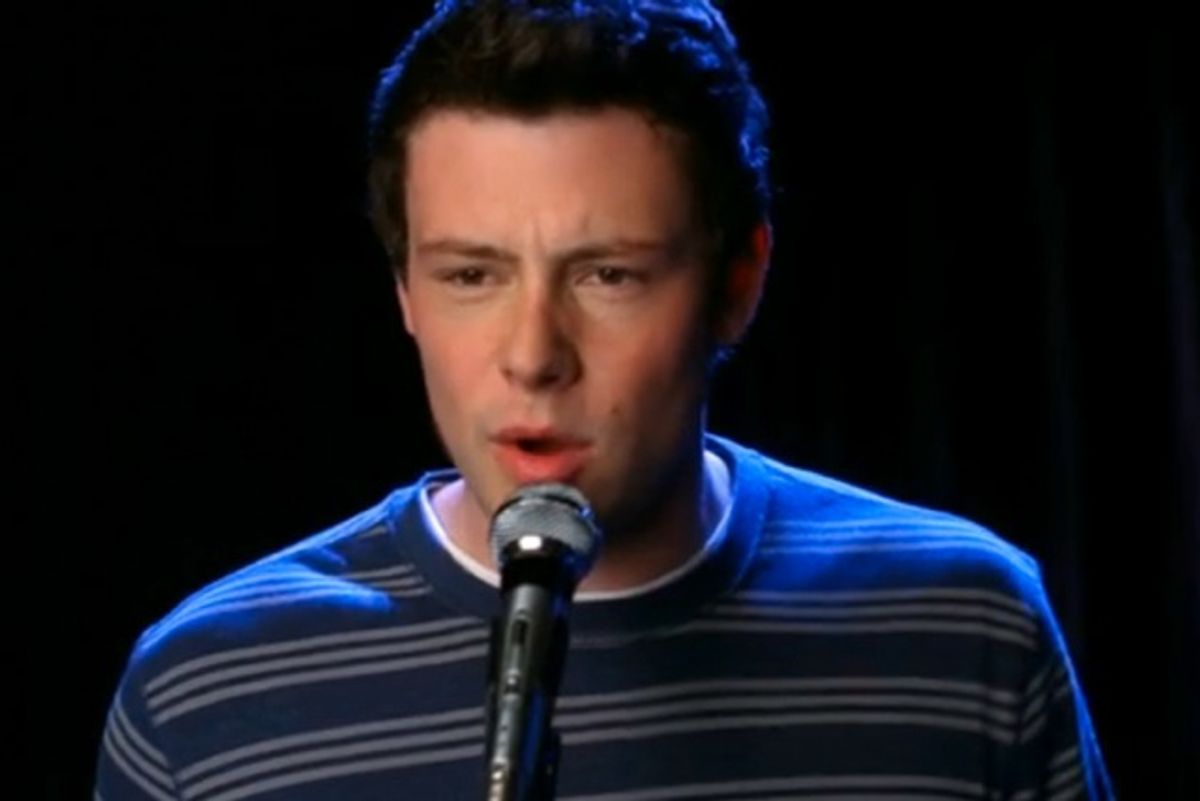 Finn mangles Jim Morrison in the premiere of "Glee."
--

Remember the good old days, "Glee"? Back when you were wickedly funny and full of great jokes and subplots? It seems like it was just months ago when you were still charming us with your delicious send-ups of show choir geekery, teen pregnancy, McMansions, domineering wives, obsessive-compulsive honey-pies wielding anti-bacterial wipes... Wait, it was just months ago. How did it all fizzle out so fast? How?

Last night's return drew its biggest crowd ever, but why did we bother? Instead of offering us a few new twists and turns, we've got Rachel mooning over Finn (again), Mr. Schuester and his sweetheart separated by the fates (again), and Sue Sylvester doing her same old "I'll get you, my little pretty!" routine -- you know, the one that was funny the first 12 times she did it, but just gets less amusing with repetition? Don't waste Jane Lynch like this, that woman could make the text on the side of a cereal box funny.

The only new plot twist with any flair -- Rachel's new love interest, the similarly narcissist star of rival choir "Vocal Adrenaline" -- was deflated when we found out that he's only playing her. Yes, just another eeeevil character to make this show even more flat and cartoonish.

Basically, "Glee" has become an elaborate set-up for the fantastic songs they can now get rights for, thanks to the bump in sales those artists probably experience from the show. But instead of just bursting into song like they used to, the characters tell us what they're about to sing. Or Will Schuester announces a clunky theme ("Let's all sing songs with the word 'hello' in them!"). Even after this awkward choice, we still get Will and Finn walking into the auditorium where a band is waiting.

Will: I want you to meet the new improved Finn Hudson, by singin' about it.

Will: Yeah! So just pick a song and they're ready to back you up.

Finn: Well, I like what you said about me being like Morrison! And The Doors have a "Hello" song, so maybe I could find myself and do my glee assignment at the same time!

Sweet god, what is this, Sesame Street? Then Finn breaks into a growly, awful version of  "Hello, I Love You," possibly the worst Doors cover ever performed -- and that's saying a lot.

Even "Vocal Adrenaline's" performance, usually good for a laugh, is ruined by too many quick camera cuts -- to a hand! to an ankle! -- that make it impossible to appreciate the frantic choreography.

Then there's Rachel, who's been doing the same flinchy, bent-knee, I'm-in-pain dance for every song since the show began. Why do they continue to dress her like a 4-year-old? How can we rally behind a heroine who dresses like that, who gestures like that? Who would've ever thought that a version of The Beatles' "Hello Goodbye" could be so underwhelming and so... mournful?

Even Sue Sylvester's parody of Madonna's "Vogue" only had one or two amusing moments to it, the rest wasn't a parody so much as an inferior copy.

This show needs a shot in the arm. New stories beyond "You're going down, Will Schuester!" and "Glee club is finished!" and Rachel cringing and weeping in tiny plaid jumpers. New styles of choreography and staging -- I mean, my God, you have the entire pop catalogue at your disposal! The possibilities are limitless! Hire some really talented, creative person, from Broadway or from Lady Gaga's staff, someone with a little vision who'll stir things up and stop giving us the same performance and hitting the same "See how full of longing I am?" note with a hammer, over and over again. Hell, I bet there are a few show choir directors who could turn this show around.

In the meantime, here's hoping next week's Madonna episode, which is great according to rumors, will liven things up around here. We're all rooting for you, "Glee," but you've got to stop phoning it in if you're going to keep these big crowds around for much longer.