Republicans play us for dupes on financial reform

Conservatives are representing themselves as anti-bailout populists, while serving Wall Street 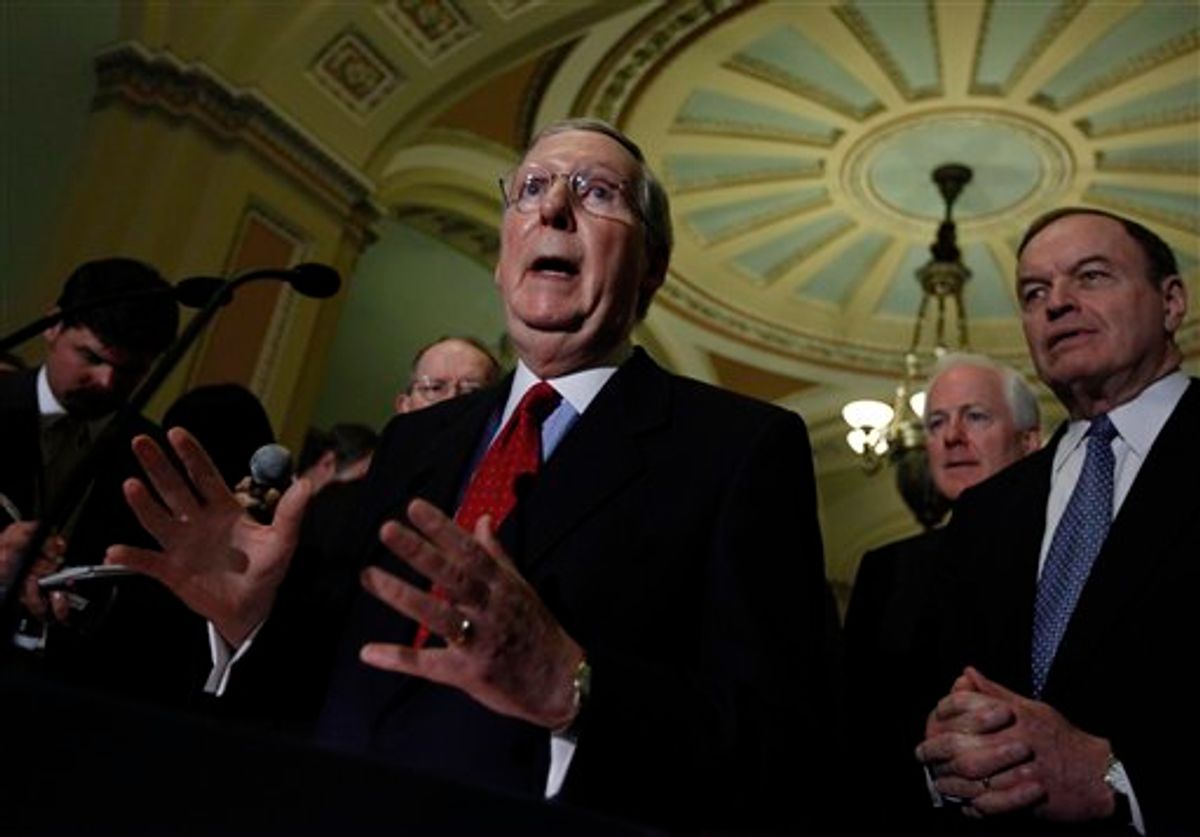 Senate Republicans today debuted their new strategy for financial reform: Refuse to cooperate with Democrats on grounds that the Dems are too willing to give Wall Street what it wants.

I'm not making this up.

In a Senate floor speech Minority Leader Mitch McConnell said Republicans couldn’t support the legislation that emerged from Chris Dodd’s banking committee because it "institutionalizes" future taxpayer bailouts of the Street, giving the Federal Reserve "enhanced emergency lending authority that is far too open to abuse." Senator Bob Corker, a senior Republican on the committee who had spent many weeks negotiating the bill with Dodd, huffed that Dodd’s final bill provides "the ability to have bailouts."

Sen. Lamar Alexander, a member of the Senate Republican leadership, blasted Dodd for partisanship -- "Dodd jerked the rug out from under Sen. Corker and went back into a partisan bill" -- that is, partisanship toward Wall Street. Alexander said Republicans will hold out for a plan "that would end the practice of too big to fail and that would make certain that we don’t perpetually use taxpayer dollars to bail out Wall Street."

Republicans have been looking for a way to oppose Senate Dems on financial reform without looking like patsies for the Street. And now they think they’ve found it -- by trying to make Democrats look like patsies for the Street. The strategy is surely the handiwork of Republican pollster Frank Luntz who for months has been telling Republicans "the single best way to kill any legislation is to link it to the Big Bank Bailout." (See Luntz's memo.)

Let's be clear: The Dodd bill doesn’t go nearly far enough to rein in the Street. It allows so-called "specialized" derivatives to be traded without regulatory oversight; its capital requirements are weak; it gives far too much discretion to regulators, who, as we've seen, can fall asleep at the switch; it does nothing about conflicts of interest within credit rating agencies that rate the issues of the companies that put food on their plates; it puts a consumer protection agency inside the Fed whose consumer bureau didn’t protect consumers; it doesn’t do anything to control the size of banks; it delays dealing with other hard issues by assigning them to vaguely-defined "studies"; and, yes, it preserves the possibility that the Fed could launch another bank bailout.

But the Street thinks the Dodd bill goes way too far, and wants its Republican allies to water it down with more loopholes, studies, and regulatory discretion. Republicans figure they can accommodate the Street by refusing to give the Dems the votes they need unless the Dems agree to weaken the bill -- while Republicans simultaneously tell the public they’re strengthening the bill and reducing the likelihood of future bailouts.

It's a bizarre balancing act for the Republicans, reflecting the two opposing constituencies they have to appease -- big business and Wall Street, on the one hand, and the emerging Tea Partiers, on the other. The Tea Partiers hate the Wall Street bailout as much as the left does. It was the bailout that "really got this ball rolling," says Joseph Farah, publisher of WorldNetDaily, a website popular among Tea Party adherents. "That’s where the anger, where the frustration took root."

The awkward fact, of course, is that the bank bailout originated with George W. Bush and a Republican congress. "Without this rescue plan," Bush told the nation in September 2008, “the costs to the American economy could be disastrous." New Hampshire Senator Judd Gregg, the leading Republican negotiator of the bailout bill, warned that without the bank bailout, "the trauma, the chaos, and the disruption to everyday Americans' lives would be overwhelming."

Republicans figure the public’s attention span is so short they won't remember, and that the public understands so little about the details of financial reform that Republicans can weaken the Dodd bill without leaving any fingerprints.

I have a suggestion for Senate Democrats: Don't let them get away with it. Smoke the Republicans out. Respond to their criticism that the Dodd bill leaves open the possibility that some future bank will become too big to fail by amending the bill to limit the size of banks to $100 billion of assets -- so no bank can become too big, period. Challenge the Republicans to join you in voting for the amendment. If they decline, force them to explain themselves to their local Tea Partiers.