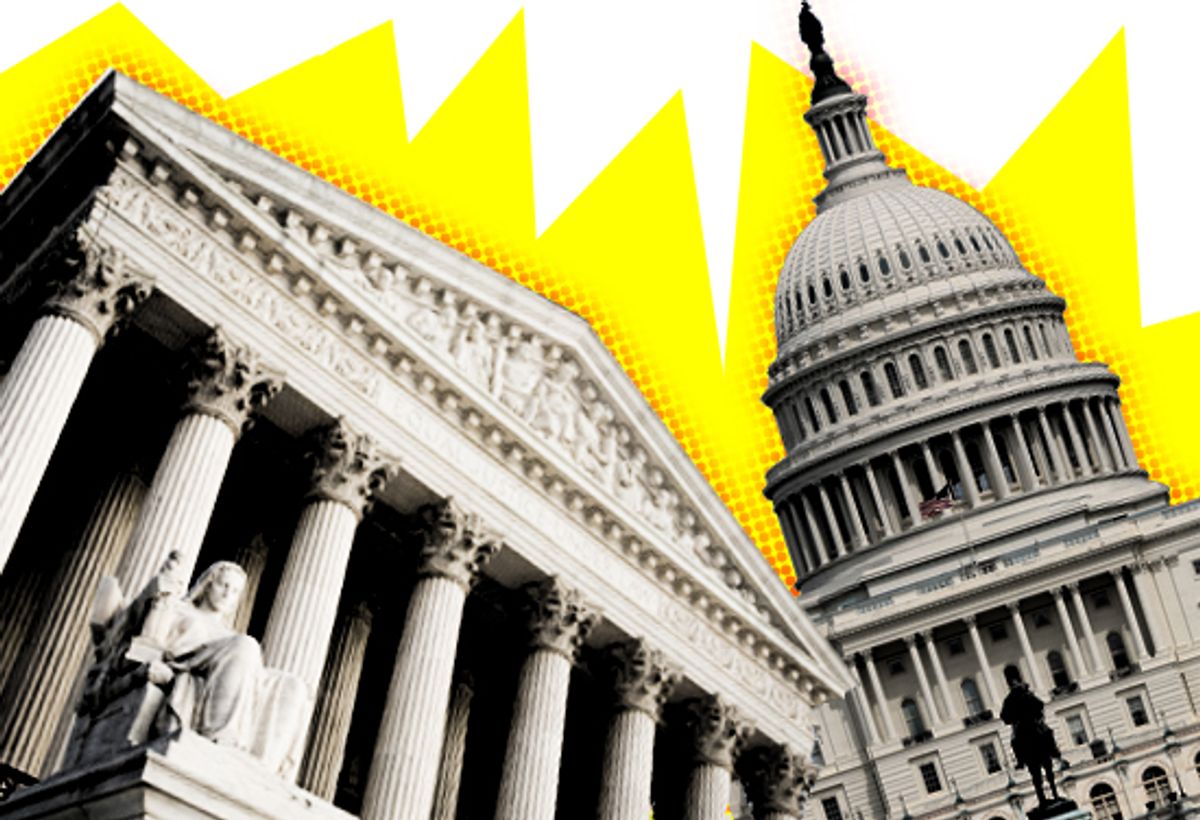 The Senate spent a lot of time, and a fair amount of energy, last summer on a drama that everyone knew the ending to before it got started: the confirmation hearings for Sonia Sotomayor, who, by the fall, was sitting quite comfortably on the Supreme Court as the first Latina justice.

But that was before Scott Brown got to Washington. Now that Republicans have the 41 votes they need to bring the Senate to a halt, the pressure on the GOP to actually use the filibuster could be far more intense than it was last year. The party failed to stop the healthcare reform law from passing, even with the added seat, and so far, they have little to show conservatives for all the effort they made to help Brown win. (Even from Brown, who joined Democrats Monday to break a GOP filibuster on an unemployment bill and who is skipping a big tea party rally in Boston on Wednesday.) Supreme Court nomination battles always help both parties rally their faithful, as politicians get a chance to talk about how much they agree with grass-roots activists on the issues they care about.

And yet, so far, GOP lawmakers don't seem to be itching for the kind of struggle over the nomination that they could mount with their 41 votes. No Republicans are promising a filibuster if President Obama doesn't pick a potential justice they like, and few of them are throwing much incendiary rhetoric out before the White House makes an announcement. (Compare that to the weeks before Sotomayor was picked, when the GOP was running around warning Obama about his choice before he had made one.)

All of a sudden, with more clout on their side than they had last year, Republicans seem to be playing nice.

"Obviously, that's the president's prerogative," Senate Minority Leader Mitch McConnell, R-Ky., said Tuesday about the pick. "We intend to evaluate the nominee, once he or she is put forward, and not prejudge the outcome. And, you know, beyond that, I really couldn't go because I think it's clearly up to him who he chooses to pick. Most of my members have been historically concerned about judicial activism, but we'll have to wait and see who the president nominates, and we'll go from there." McConnell and Sen. Jeff Sessions, R-Ala., the ranking GOP member of the Judiciary Committee, will meet with Obama next Wednesday, along with Senate Majority Leader Harry Reid, D-Nev., and Judiciary Committee Chairman Patrick Leahy, D-Vt.

The contrast last year between Sotomayor's résumé and the rhetoric about Obama's probable use of his pick may be contributing to the Republican restraint so far; after weeks of hearing GOP lawmakers and conservative activists panicking about the radical liberal the president was likely to nominate, he tapped, instead, a relative moderate who had been moved up the judicial system by Democratic and Republican presidents alike. Sotomayor was so obviously qualified that Republicans quickly decided to play her "wise Latina" comments for some political benefit, but otherwise stay out of her way.

Which could be what happens this time, too. "There's obviously an opportunity to make this an issue for the fall," said Sen. John Thune, R-S.D. "And it's an issue that a lot of people care about." No matter whom Obama picks, Republicans plan to use the confirmation hearings to raise questions they think will help them in November; for instance, GOP lawmakers are already talking about asking questions about the constitutionality of the healthcare law. No nominee will answer that question -- or any other one, for that matter, about a case that could come before the court if he or she is confirmed -- but it'll give Republicans a chance to spend some time on national TV railing against the healthcare bill again. (Whether that's actually good for them depends on which polls you read.)

That doesn't mean conservative groups might not push for the GOP to take a hard line once Obama announces his nominee. "They're always interested in a fight," said Sen. Lindsey Graham, R-S.C., who sits on the Judiciary Committee. "There are going to be people on the right and the left that want to fight." (So far, no major conservative activist organizations are calling for a filibuster yet, and some are explicitly advising against one.)

Of course, Republicans probably won't be able to sustain a filibuster, even if the base demands one, unless Obama nominates someone unexpectedly liberal. Nine GOP lawmakers voted to confirm Sotomayor, including Graham. And when George W. Bush was president, the GOP spent a couple of years denouncing the very notion of filibustering judicial nominations; the "nuclear option" term that Republicans and Fox News threw around to describe the budget reconciliation process used to finish the healthcare bill was originally the name of a Republican-hatched scheme to declare it against the Senate rules to filibuster judges.

But that might not stop them from trying, if the base demands action. "I'm going to look at the Supreme Court nomination on its own, and try to be responsible about it, but it certainly doesn't help when -- right after jamming through a healthcare bill -- the president and the Democratic majority say, 'Let's forget about bipartisan work on the financial bill,'" Sen. Lamar Alexander, R-Tenn., the third-ranking Senate Republican (and another Sotomayor supporter) said. That was a little ominous, but Alexander said he only meant that the Senate "works on consensus" in general. Still, he did say the GOP didn't start the whole thing. "The Democrats invented the idea of filibustering Supreme Court nominees," Alexander said. "It was President Obama [as a senator] who filibustered Justice Alito, not Republicans filibustering them." (Though, in classic Obama fashion, he criticized the failed filibuster attempt even as he voted for it.)

In the end, what might determine how many obstacles Republicans throw in the path of any Supreme Court nominee could be how much work gets done on other subjects between now and the summer, when the court pick is likely to come up for hearings. The last thing the GOP wants is for Democrats, and the White House, to spend the months before the elections building up a legislative record that includes -- besides healthcare reform -- more popular accomplishments like financial reform or changes to campaign finance laws. Even if the GOP doesn't wind up actually trying to filibuster the nomination, don't expect the confirmation hearings to go by too quickly. No matter whom Obama picks. There is, after all, an election to win.