Some love for the Waffle House

After driving by them for years, I finally stopped in, and the world became a better place 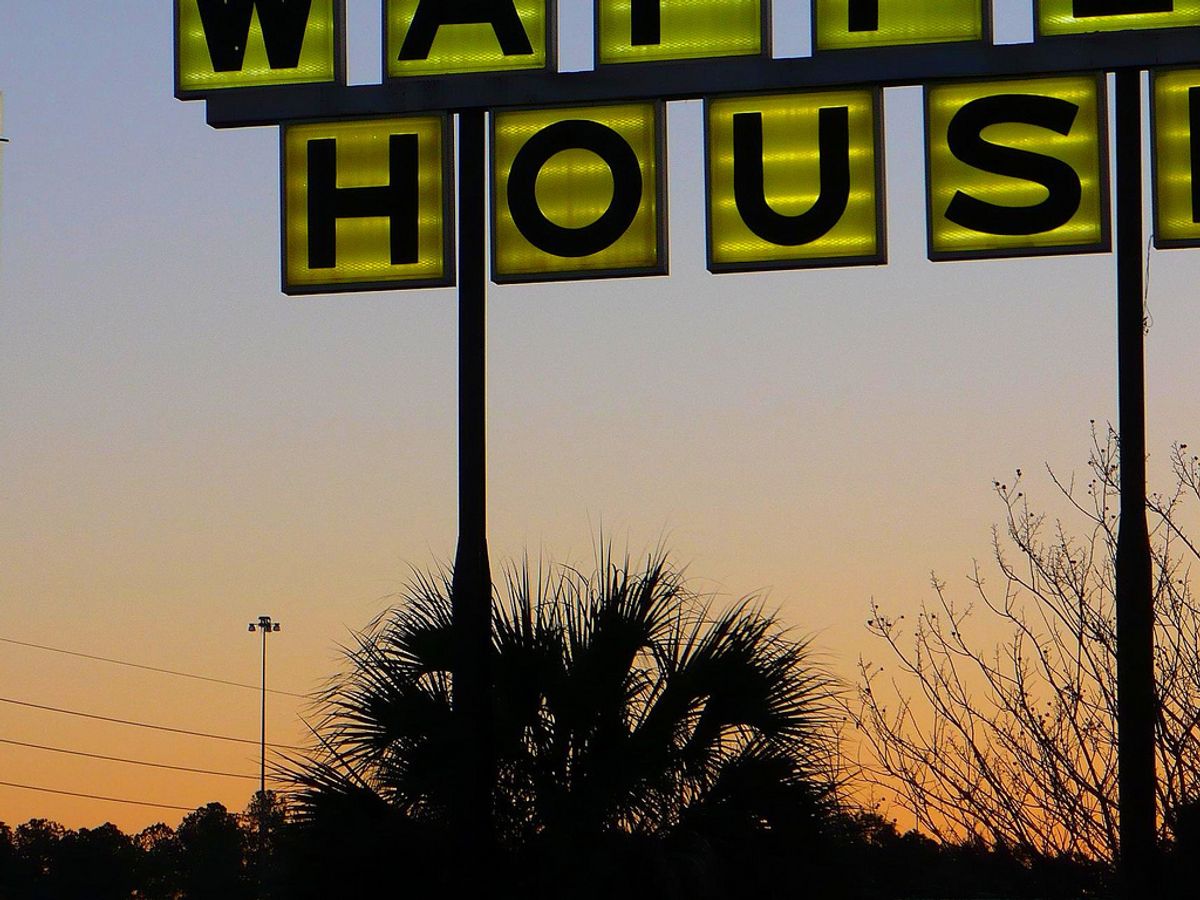 A version of this story originally appeared on Sprezzatura.

Waffle House is the unofficial flower of the Southern Interstate. Driving back north from the Gulf Coast on I-65, their yellow signs blossom in hamlets from Alabama to Kentucky. I've taken this route for years now, but my mother has thwarted every one of my romantic urges to pull in for a waffle, to meet locals and chitchat with a folksy waitress holding a coffeepot. Finally, this year, somewhere near Franklin, Tenn., I convinced her to give it a try.

On the way in, we were stopped by a gravel-voiced, sun-damaged woman in a Gatlinburg sweat shirt with silk-screened horses. "Where are y'all headed?" she asked, taking a drag off her cigarette. I told her we were on our way home to Michigan. "Must be snow there," she said, "we're out looking for snow." We live with shovels and kitty litter in our trunks from October to April, so the idea of "looking for snow" was highly amusing, but there had been a rare blizzard across the deep South the day before, and apparently Ms. Gaitlinburg and her crew were really driving around looking for snow. We wished her safe travels, and found ourselves a booth.

The Waffle House menu is pretty straightforward except for the "World Famous Hash Browns 7 Different Ways" including "scattered, smothered, covered, chunked, topped, diced & peppered." No mention is made of Doc, Happy, Sleepy, Dopey, Grumpy, Sneezy or Bashful. I decided to have waffles, since I was at a Waffle House, and to try the Famous Hash Browns in restrained fashion: scattered, smothered (with onions) and covered (with cheese).

As we waited for our food, I watched a young man named Esco working behind the counter. It was a tiny place, really, and Esco, with a thick drawl and the looks of a young Colin Farrell, was flirting with a carload of college girls wearing pajama pants and sweat shirts, on their way to Florida for spring break. "You don't talk much," he observed, speaking to the prettiest of them.

"I do when I have something to say," she replied, smiling and fiddling with her fork. As his co-workers teased him about his sudden diligence about keeping the counter clean and the register area tidy, I wondered how often this happened to Esco, that he spent 45 minutes or an hour waiting on someone who captured his imagination and made his heart beat a little faster, only to have them get back on the Interstate on their way to someplace he wasn't invited.

While watching this drama, I received my food, along with a cup of coffee. I am happy to report that the waffle was delicious -- flavorful, crisp outside, fluffy inside and improved by the application of maple syrup. The hash browns were also very good -- the potatoes were real; I watched them cooking on the griddle along with the onions. They involved not a little Processed American Cheese Food, which made for a lovely, mellow blanket for the potatoes and onions.

We finished and headed out to the car, dreaming of the day when I can order the hash browns all seven ways, only to discover the four college travelers lying on the ground with their heads under the front end of their car. I asked if they needed help, and they said that they had been involved in a minor accident and didn't think there were any big problems except that a "thingie" was loose, and they weren't quite sure what it was. Although my son knew what it was, and started to tell them, I gave him a stern look and did a "lock your mouth and throw away the key" pantomime. I saw a chance, in the untethered, unfocused course of a road trip, to leave the world a little better than I had found it.

"You know," I said to the prettiest one, the one who only spoke when she had something to say, "I bet Esco could help you with this." As we drove away, I could see our hero, rag in hand, crawling under the front bumper of the blue Chevy Malibu as the girls watched.