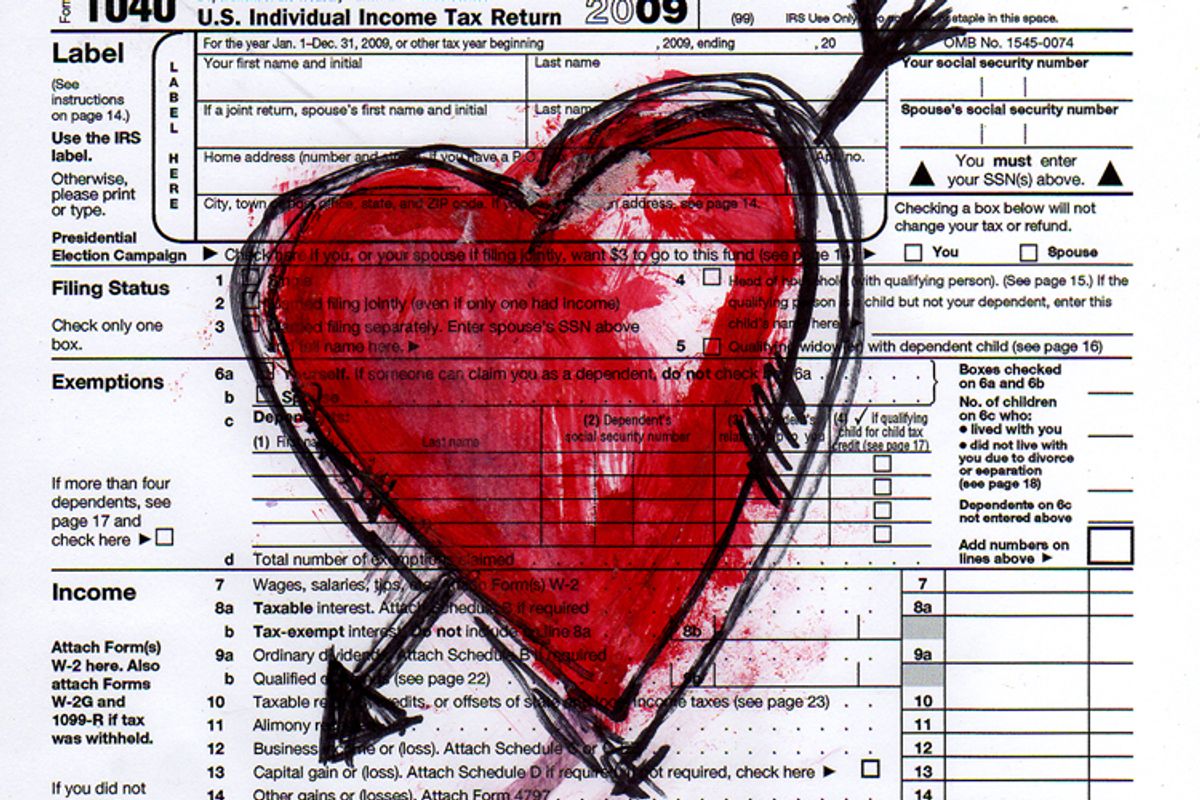 Like a lot of Americans, I've spent a small but deeply unfortunate fraction of my recent life puzzling over the Tea Party's Tax Day Extravaganza of Irrational Grievance, or whatever they're calling it.

As a longtime resident of the Boston area, it's especially galling to see a bunch of angry old white people -- many of whom, we learned recently, are on the federal dole -- behave as if their democratically elected officials are foreign despots. It would probably behoove the Fourth Estate to draw a thick line between genuine victims of colonialism and sore losers.

Still, if you're looking for a cheap excuse to get the Fox News Militia fired up, Tax Day is a gimme. And why not? As viewed from the comfy confines of conservative punditry, taxes are a form of bureaucratic robbery.

You dittoheads know how it works: Every April 15, millions of decent, hardworking Americans get shaken down by the IRS, whose sadistic geeks make them fill out really complicated forms, then send checks. This moolah is handed directly to welfare queens and illegal immigrants, who are required to mate in the hopes of producing a Mongrel Super Race of Criminal Freeloaders. If there's any dough left over, it goes into the Super Secret Christian Baby Abortion Fund.

I can't really hope to compete with that narrative. But I do want to confess something almost heretical in these days of loud patriotism: I love Tax Day.

Yes. You heard me: I love it! If I could put Tax Day in a tight leather jacket with nipple zippers and $400 Kawasaki glasses, I'd feed it tequila shooters and have my way with it.

This will probably come as something of a surprise to friends and relatives, given my record as a taxpayer, which is, to put it gently, spotty. Indeed, for many years I felt a genuine sense of dread and bafflement when it came to Tax Day.

There were many reasons for this, starting with the fact that (like many Tea Partiers) I don’t have a full-time job. Instead, various publishers, colleges and media companies employ me as an independent contractor, meaning I pay my taxes in one lump sum at the end of the year. I shelled out more than $20,000 a few years back. On the memo line of the check, I was careful to write: "Mongrel Super Race." My general approach to Tax Day consisted of waiting until, say, April 13, then calling my father in a panic, and spending five or six hours listening to him fill out Turbo Tax on my behalf while quietly cursing.

But my financial affairs have become more involved recently, for two reasons. First, somewhat improbably, I've started to earn more money. For another, in 2006 I got married and had a child, roughly in that order.

Strangely -- and it does feel genuinely strange to me -- these momentous events have totally upended my animus for Tax Day. Here, then, are the Five Reasons I Totally Love Tax Day (and Why You Should Too):

1. Tax Day Forced Me to Get My Fiscal Shit Together

As has been clear to everyone in my life for a very long time, I am super-disorganized and (more insidiously) I am deeply invested in my disorganization, which I consider to be a cute, writerly affectation, à la Dickens, but which is really more like an excuse for being lazy and inconsiderate.

My wife, who is also a writer, helpfully pointed this out shortly after our wedding, in late March of 2006. My refusal to keep records of any kind, my blithe yen for guesstimating figures, my rakish refusal to pay estimated taxes -- all these quirks, she argued, might land me in prison. "A little time in the hoosegow wouldn't be so bad," I said. "Think about it: lots of free time, almost no overhead."

My wife, pregnant at the time, did not find this funny.

Then something even less funny happened. The IRS sent me a letter informing me that there were "concerns" about my previous returns. I would need to revise said returns to avoid a full-blown audit. It was around this time, I believe, the accountant got involved. She stared at my old returns for a long time. Then she said, more to herself than to me, as if genuinely engaged in the exploration of a cosmic mystery, "What exactly were you thinking?"

I will spare you the ensuing tale of bureaucratic woe, which one might call "Kafkaesque," except that it contained no discernible literary qualities. The short version is that I paid $4,000 to clear my name.

Somewhere in the midst of this process, it dawned on me that I was no longer a devil-may-care bachelor, but the primary breadwinner of a family consisting of two artists. I needed to seize control of my fiscal destiny.

Tax Day has turned out to be a big help. It forces my wife and me to examine precisely how much we spend and on what. This, in turn, makes it much harder for us to fall prey to the junk mail come-ons of credit card companies, which (as you may have noticed) profit most richly when Americans have the least clue about the true nature of their own finances.

2. Children, It Turns Out, Are Extremely Fragile

This hadn't occurred to me until I had two of my own. I now spend a lot of time worrying about stuff that I never used to worry about. Such as: the quality of my drinking water and food and local public schools and parks and playgrounds and roads. And thus the notion that my taxes actually pay for things required by my fragile children has managed to burrow its way through my thick American skull. Paying a small portion of my income for these collective benefits is not only a basic civic duty, in other words, but it is in my interest.

It's hard to pay taxes, particularly federal taxes, when the administration in power is disinterested in governing. Or, more precisely, when it views government's essential function as an enabler of corporate greed.

I'm not suggesting that I'm thrilled with Barack Obama's leadership. He's proved a total moral weakling, frankly. But I do applaud his basic goals: to make healthcare more affordable, to rein in the financial system, to create a green economy, to spend more on education and less on giant weapons systems.

4. Anything the Tea Partiers Are Against, I'm For

It's become mainstream media practice to refer to the Tea Party as a "movement." I would characterize it in slightly less heroic terms: as a series of highly publicized tantrums.

Of course, people have every right to drive (on public roads, paid for by taxes) to a meeting place (usually a public space, paid for by taxes) and to congregate to express their hatred for taxes, along with reproductive rights and gun control and anything else Barack Hussein Obama might favor. But to call these gatherings a coherent or rational response to the current administration is laughable. Obama has, after all, lowered taxes for most Americans, just not the rich ones.

The Tea Partiers represent the aggrandizement of paranoia, rage and self-pity into a political agenda. It is a "movement," created by for-profit demagogues whose sole mission is to build audience share at the expense of honest debate about our common crises of state. Its mindless and violent hatred for Tax Day stands as one of the best reasons to love Tax Day.

5. I Believe in Playground Justice

Because I have two small children, I spend a lot of time at playgrounds these days. The rules on the playground are simple: you share. I tell my 3-year-old this all the time. "Can you share?" I say. And, "Big girls need to learn to share." And, "I'm serious, Josie, if you don't share we're going home."

This doesn't make me a socialist. It just makes me an adult, someone who recognizes that the pursuit of happiness in the midst of limited resources requires sacrifice.

Tax Day is our annual reminder of this fact. It reminds us that one of the prices of citizenship in these United States is the levying of taxes, to provide for all the stuff I've mentioned above, along with, you know, a common defense.

I would be happiest, as a taxpayer, if my return came with a survey, so I could check off those items toward which I wanted my taxes devoted. But that's not how it works. How it works is, if you want to live in America and partake of its bounty -- plentiful food and water, shelter, safe streets, schools and so on -- you pay your share. If folks don't like that, they can leave.