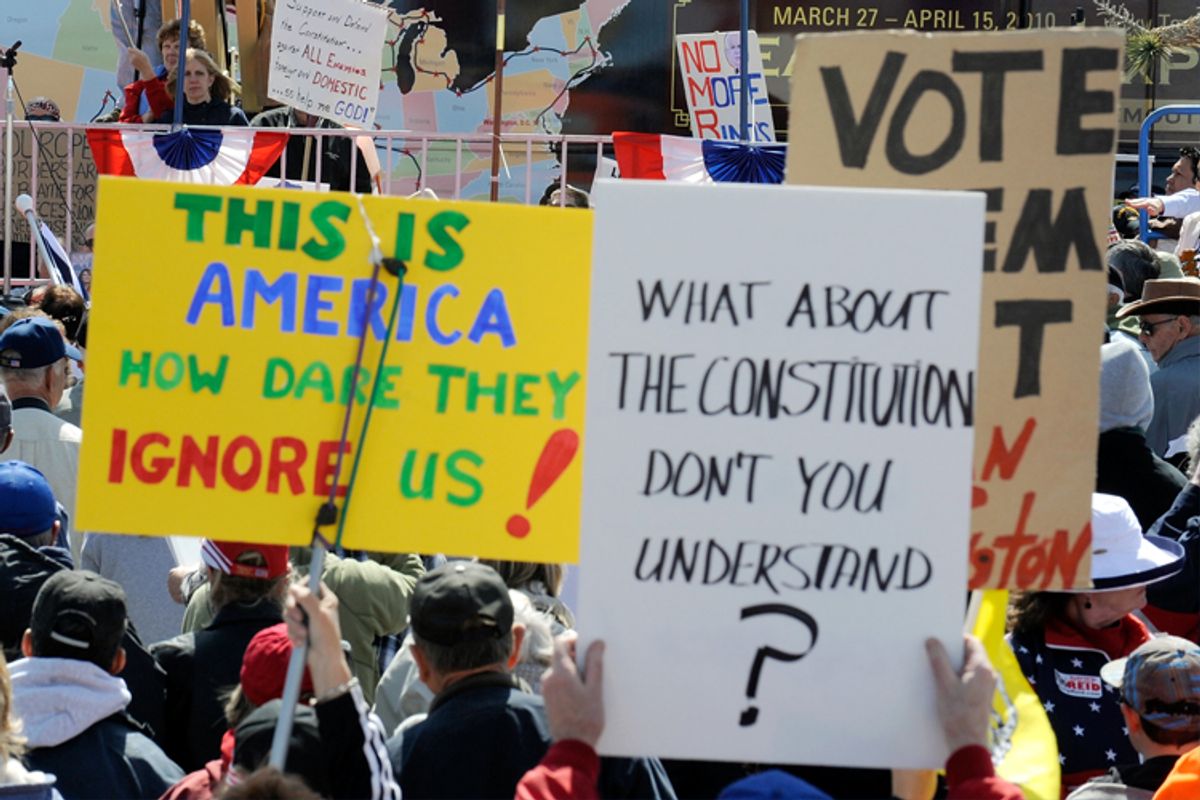 Slowly but surely, a demographic profile of the Tea Party movement – which began just over a year ago and is now dominating the news as Tax Day arrives – is emerging.

A comprehensive poll conducted for the New York Times and CBS News and released late Monday CBS News/New York Times essentially found what anyone watching a couple minutes of news footage of a rally would intuit: the 18 percent of the nation that identifies with the Tea Party movement tends to be white, male, older than 45 and Republican. And also hypocritical: despite their anti-spending rhetoric, Tea Party supporters told pollsters that two of the federal government’s most money-consuming programs, Social Security and Medicare, are worth the cost to taxpayers (maybe not a surprise, given the Tea Partiers’ average age).

Interestingly, despite the frequent framing of the Tea Partiers as a predominantly blue-collar, the NYT poll also found that they are wealthier and better-educated than the public as a whole. And half of them think the Obama administration’s policies favor the poor.

If you stopped there, you might think this is largely a class-based movement, built on the principle of “I got mine.” But there’s more to it than that: 25 percent of the movement’s supporters think that the administration favors blacks over whites (compared with 11 percent of the general public).

This point is reinforced by a study released last week by the University of Washington, which discovered that people who think that “the U.S. government has done too much to support blacks” were 36 percent more likely to support the Tea Party than those who didn’t think so. Among whites who approve of the Tea Party, only 35 percent said they believe blacks are hard-working, only 45 percent believe blacks are intelligent, and just 41 percent believe that they’re trustworthy. (Curiously, the UW poll was only conducted in seven battleground states.)

While the Tea Partiers take pains to avoid appearing racist, they’re still operating at the nexus of class and race. This seems to have reached a head with healthcare reform. The UW survey’s director, Christopher Parker, summed it up this way: “While it's clear that the Tea Party in one sense is about limited government, it's also clear from the data that people who want limited government don't want certain services for certain kinds of people. Those services include health care.”

The UW survey shows Tea Partiers’ concerns with federal government spending are bound up with fears of having to share “their” benefits with people who aren’t deserving – and who also happen to be non-white.