"Eaarth": Earth is over 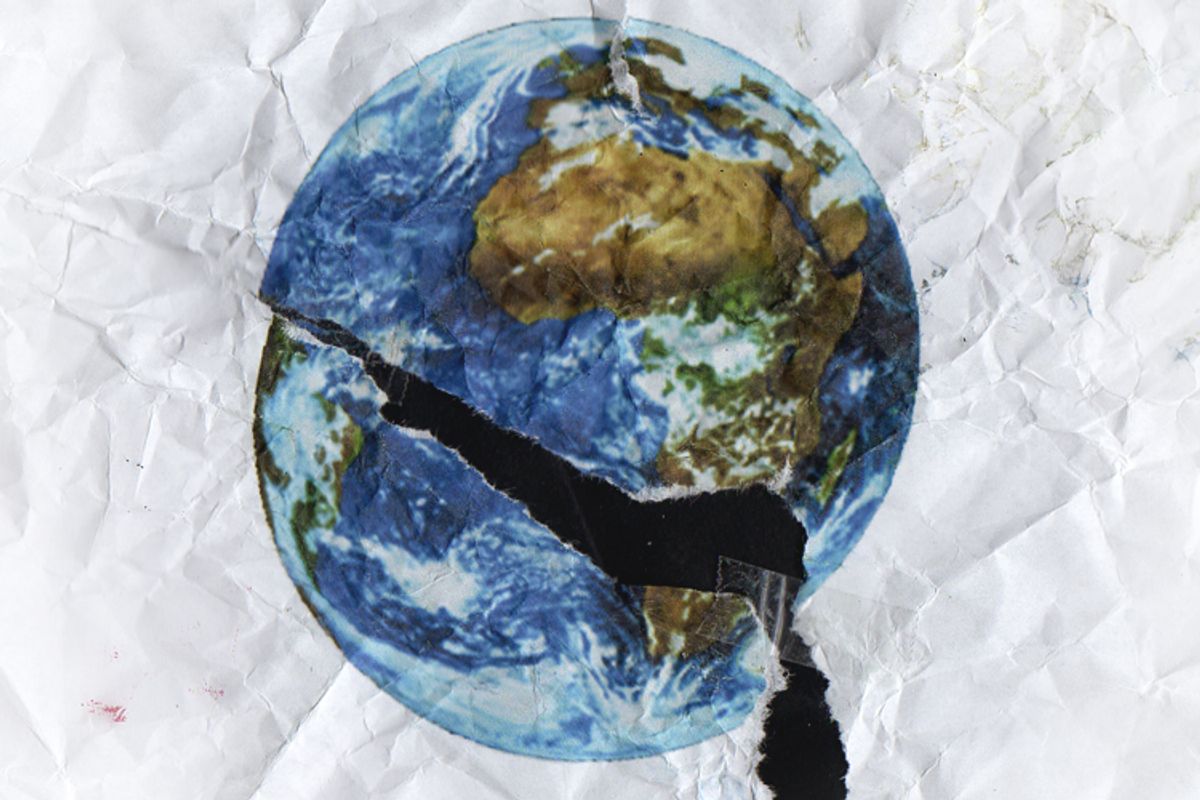 According to Bill McKibben, the respected environmentalist and author of the pioneering "End of Nature," the planet Earth, as we know it, is already dead. Over a million square miles of the Arctic ice cap have melted, the oceans have risen and warmed, and the tropics have expanded 2 degrees north and south. Global warming has caused such pervasive and irreversible changes, he argues, that we now live on a new planet with a new set of environmental and climatic realities — and, as such, it deserves a new name: Goodbye, Earth. Hello, "Eaarth."

McKibben’s hair-raising new book, "Eaarth: Making a Life on a Tough New Planet," is a scrupulous and impassioned account of the severely compromised globe on which we now live. He lays out the myriad ways in which climate change has remade our world, but he also goes much further, chronicling its current and future human toll. He explains how droughts in Australia helped precipitate the 2008 food crisis and put 40 million people at risk of hunger, and how the rapidly melting glaciers of the Andes and Himalayas may soon threaten the water supply of billions. Our only hope of survival, McKibben suggests, is a reversion to small-scale, local ways of life. "We simply can’t live on the new earth as if it were the old earth," he writes. "We’ve foreclosed that option."

Salon spoke with McKibben over the phone about the meaning of "Eaarth," our grim future, and what Tom Friedman got wrong about global warming.

The meaning behind the title is that we really have created a new planet. Not entirely new. It looks more or less like the one we were born into; the same physical laws operate it. But it’s substantially different. There’s 5 percent more moisture in the atmosphere than there was 50 years ago, much less ice at the top of the Earth, et cetera. Calling it "Eaarth," an admittedly weird word, is a way of calling people’s attention to the fact that the changes that have already happened are large enough that if you were visiting our planet in a spaceship, this place would look really different from the outside than it did just decades ago.

The most visible change is what’s happening to ice around the world. But probably the most important is what’s happening to liquid water. Warm air holds a lot more water vapor than cold, so you get a lot more evaporation in dry areas, and hence more drought. Even easier to measure, and more troubling, is the fact that what goes up must come down, and what’s coming down are these intense precipitation events.

In the book, I describe the rainfalls in my small town in Vermont — record floods that cut us off from the rest of the world. But that’s happening around the world almost every day now. The 100-year storm comes three times a decade in a lot of places. Stuff like that is sobering, not only because it demonstrates how out of balance things are, but also because the consequences of a world run amuck are not to be taken lightly.

What consequences are we talking about?

India, for example, is constructing this massive wall to protect it from Bangladesh. Not because it represents a military threat, but because there’s 150 or 160 million people there who are increasingly squeezed by a rising ocean. As best we can tell, the failure of the monsoon across Africa is climatically related, and that’s clearly played a big role in what’s been happening in the wars in Sudan and Somalia. It’s not that there’s an out-and-out war about climate change; it’s that all the stresses that already plague the planet get harder and harder to deal with. If you’re already short of water, say, now you’re shorter.

Most accounts terrifically underplay what’s actually going on already. But in my life as an organizer, we’ve been very successful without trying to scare people. Last fall, my organization 350.org organized 5,200 simultaneous demonstrations in 181 countries, what CNN called "the most widespread day of political action in the planet's history."

And people were organizing around a pretty obscure scientific data point, a parts-per-million concentration of CO2 in the atmosphere. The lesson we took is that people are capable of understanding the science. It’s not harder than understanding that if your cholesterol gets too high, you’re going to have a heart attack. If the doctor says your cholesterol is too high, your first instinct isn’t to demand a rundown of how the lipid system works. You say, "OK, what do we do?"

At Copenhagen, we managed to get 117 nations to sign on to the 350-parts-per-million target, which NASA believes to be the safe percentage. They were the wrong 117 nations, of course. But in 18 months, with little money, we’ve had some real effects.

Then why was Copenhagen such a failure?

Simple: The countries that are most powerful and most addicted to fossil fuel aren’t ready to come to terms with it. You can’t really have an AA meeting while everyone’s still in denial. In each of the last three years, Exxon Mobil made more than any company in the history of money. That may give them enough political power to keep the U.S. in denial for years to come.

Thomas Friedman and others recommend a technologically advanced “green growth” project — big windmills throughout the Midwest, solar arrays in the Arizona desert, hybrid cars — to kick our addiction to fossil fuel. Won’t that work?

We eventually run into limits to further growth on the planet. All the things Tom Friedman would like to do are good things. They just cost an immense amount of money and an immense amount of resources. We can do some of them. We’d be very smart to think less about grand, continent-spanning schemes, and wise to think more about localized and somewhat humble versions of these same things. Nuclear power plants, for example, are off-the-charts expensive, because they’re highly centralized and dangerous. They’re the engineering example of too big to fail. By contrast, if the solar panel on my roof fails, I have to fix it, but it doesn’t destroy the electric grid, or release dangerous solar particles into the atmosphere.

Larry Summers, Obama’s chief economic advisor, said that "putting limits on growth because of some natural limit is a profound error." Is he wrong?

He’s wrong, but for an interesting reason. Economists, and many of us to some extent, have come to believe that the economy is more real than the physical world. Think about the incredible regard we have for the economy. "It’s healing," we say. "It’s going through a rough patch." We talk about it like it’s our aging mother. Whereas with the Earth, we say, "Oh well, it’s going through its natural cycles, don’t worry." Which is slightly crazy, because clearly the economy is a subset of the natural world, not the other way around. We lavish intense worry and affection and brainpower on the economy, but not so much on the environment. Summers is the perfect exemplar of that attitude: an incredibly smart guy whose context is so narrow it ends up making him very dumb indeed.

So what’s the best way to proceed?

First we need to reach an agreement capping our carbon emissions, and then help finance the developing world to skip the fossil fuel step and develop in different ways. Places like South Africa and Bangladesh haven’t yet gone through the development cycle that makes them rich, and they’re being told, "That’s not on offer anymore." At the moment, solar panels are more expensive than coal and will be for a while. Still, we’re going to have to provide these countries with a better alternative, and the resources to follow it, if we want to act in a way that could be described as moral.

As for the nuts-and-bolts engineering, over the long run, I’d recommend a combination of conservation; harnessing wind and sun, from both distant and nearby sources; and lifestyle changes. There's no good reason the Jersey Turnpike should be crowded with cars, not in a dense area easily served by better transit. In the transition, we'll be using a lot of natural gas to make electricity, would be my guess.

In the book you use Vermont, where you live, as an example of an environmentally forward-thinking state.

Vermont hasn’t gotten everything right. Its energy system isn’t very good. But it’s been ahead of the rest of the nation in experimenting with local food, for example, which is the easiest commodity to get back under control. Vermont is also important because of its political history (it declared its independence from New York in 1777 and was its own republic before becoming a state), and its ongoing campaigns against federal subsidies for big agriculture. Its attitude of self- determination is a reminder that small-scale activities — things like town meetings, farmers’ markets, composting — can work quite well.

But lately, in the U.S. as a whole, local and regional action has reached more than a level of experimentation. The number of farms across the country is growing for the first time in a century and a quarter, with 300,000 new farms this decade. The one business that boomed in the last two years was seeds — Burpee Seeds was up 40 percent or something. There’s an awful lot of land in American suburbs currently devoted to growing grass, often with lavish infusions of fertilizer and chemicals. Turn some of that energy and resources toward growing vegetables, and you’re getting somewhere.