Move over macarons: These treats are small, Southern, filled with sugar -- and may be the next hot dessert trend 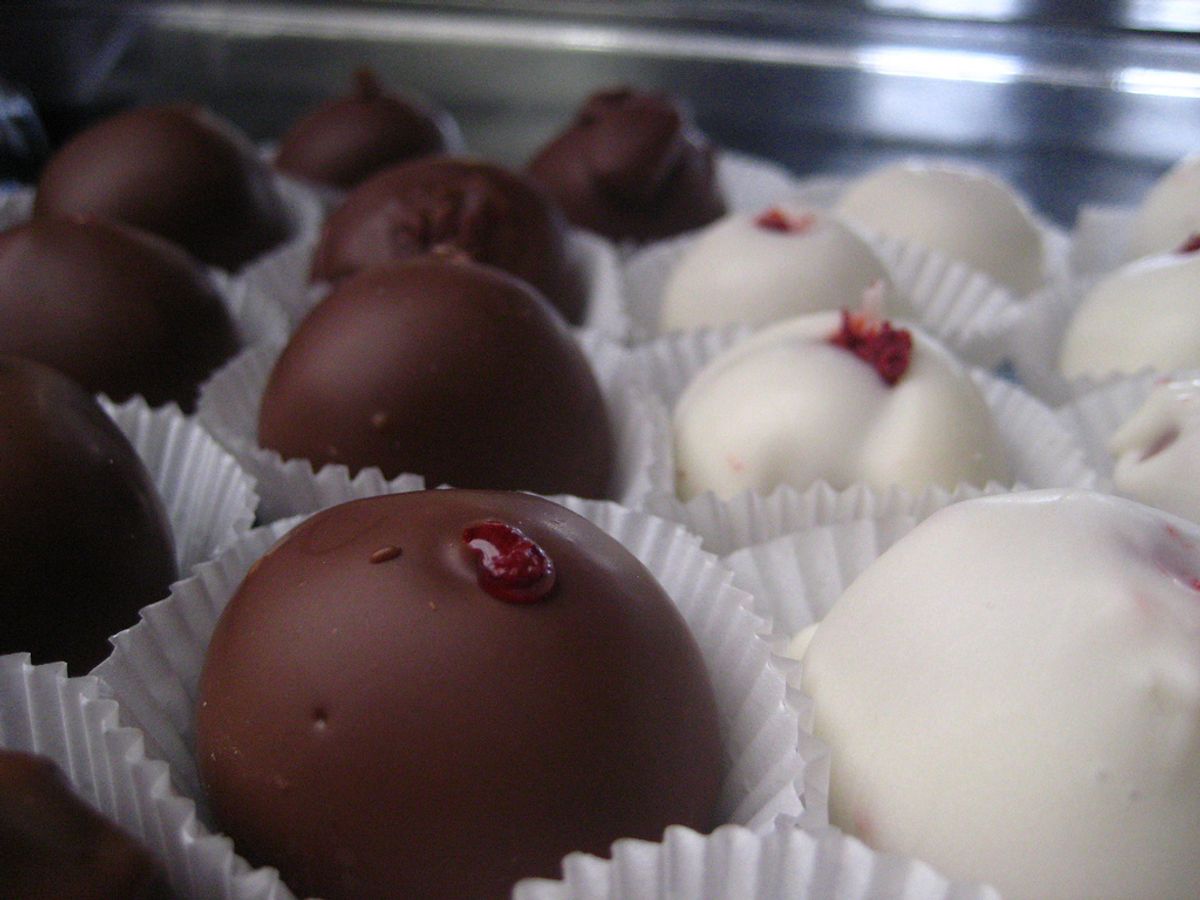 In the past few months, the macaron has often been touted as the heir to the cupcake craze, but another contender is rapidly emerging in the Southern states (specifically Texas and Louisiana) albeit with a far less classy name. Cake balls are three-bite sized treats that, like cupcakes, are portable, cheap, and the perfect size for people who want a taste of sweetness without indulging in a full slice of cake or pie (or just want to order something using the word "balls").

They are, as you'd expect, spherical desserts made of cake and frosting, covered with a semi-hard sweet coating, and unlike macarons, they're actually easy to make at home. The basic (and shockingly unwholesome) recipe involves baking a whole cake, crumbling it into tiny pieces, mixing those with frosting and covering the entire sugary mess with some sort of confectionary coating. They come in all kinds of different flavors -- ranging from red velvet and chocolate to "spicy chocolate baked with ancho, mixed with ancho cream cheese frosting and topped with cayenne toasted walnuts" (on sale at Austin's Holy Cacao dessert trailer).

Where did they come from?

Although they are supposedly an old Southern confection, the current cake ball trend seems to have been kick-started in 2006 by a Dallas woman named Robin Ankeny, who used her mother's "one-of-a-kind" cake ball recipe to start a business called, rather straightforwardly, The Cake Ball Company. In the years since, the company has exploded -- her cake balls are now shipped to numerous bakeries, popular at weddings and even available in the Neiman Marcus catalogue (flavors include strawberry, chocolate toffee and "wedding cake").

Since then, unsurprisingly, a rash of imitators have popped up, spurring what some writers have called the 2009 Texas "cake ball craze." In early 2009, New Orleans Times Picayune food editor Judy Walker claimed that cake balls "are quite the rage in Louisiana." At one Christmas party, she wrote, "I noticed my husband loading several into a napkin to take home [and] urged him to load up another napkin for me." This winter, the Dallas Morning News featured the desserts as a special Valentine's Day treat. The Onion AV Club profiled the owners of the Hot Cacao trailer, calling their cake balls (which come impaled on a stick) a "delicious amalgam that falls somewhere between pastries, truffles and lollipops." They've been selected as Rachael Ray's snack of the day, and most recently, were featured in Tasting Table's newsletter of trendy foods.

Clearly, they're popular among Southerners -- like, of course, flying-ham victim Paula Deen -- and should be a hit with anybody who isn't afraid of eating what basically consists of a large ball of sugar. Cake balls are already widespread on YouTube, and given the Cake Ball Company's national distribution, it's likely that they'll soon be expanding their popularity beyond the South. Since cake balls are small, portable and reasonably inexpensive, they are, like their cupcake predecessors, perfectly suited for city-dwellers (especially trend-conscious New Yorkers) who might be looking for a quick treat on the go.

Cake balls have a lot of things going for them -- their homey appeal, their variety, a giggle-inducing name -- and Americans are always looking for the next trendy dessert. But given the remarkable amount of sugar involved, it's unlikely that they'll ever reach the kind of widespread popularity of the cupcake (which enjoyed a considerably more responsible cake to frosting ratio). But who knows? If this summer's "Sex and the City" movie contains a scene of Liza Minelli eating a cake ball on a camel (and, at this point, why wouldn't it?) you'll probably be fighting them off with a tennis raquet by the end of the year.