"Kick-Ass" delivers on its name

This sly superhero adventure is packed with gory explosions, trashy thrills and one admirably foulmouthed girl 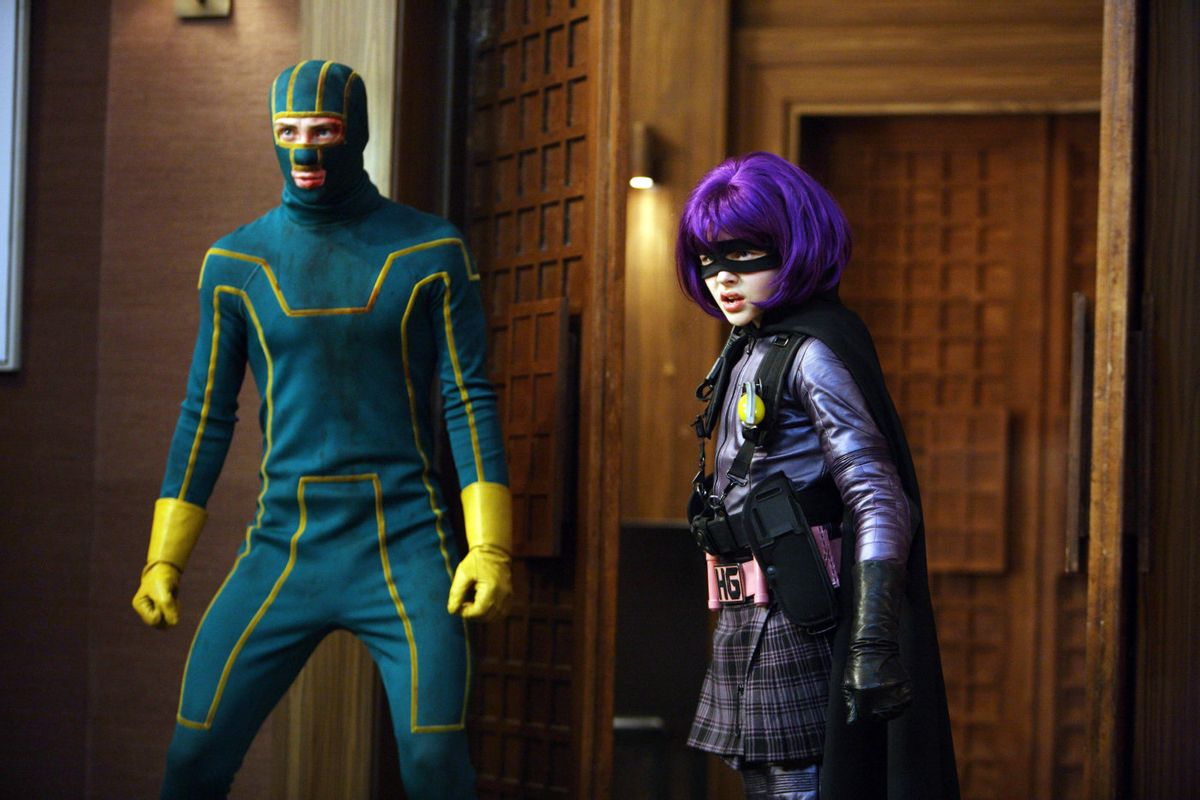 The title "Kick-Ass" is both premise and promise. The premise: Teen comics nerd Dave Lizewski (Aaron Johnson) reinvents himself as a real-life superhero, turning a wetsuit into an ad hoc costume and his mediocre life into a whirl of angry mafiosi and colorful capes. The promise: Devoted genre fans thrilled equally by domestic comic-book movies and incredibly violent foreign fare can savor both in one package. With "Kick-Ass," there are more cheap thrills, gory explosions and superheroes than a movie geek's YouTube mash-up. But that's not all, fans! With its story of an ordinary guy (sort of) becoming a superhero, the genre can deconstruct its own conventions even as it's indulging them with a wink.

At the start, Dave's just a guy with a crush on the unattainable Katie Deauxma (Lyndsy Foncesca); their last names (Lizewski = loser, Deauxma = do me) suggest they're living in a comic book universe long before Dave dons his suit. Though he's not very good at rescuing people, Dave manages to beat up three guys and get on YouTube, attracting the attention of pre-pubescent killing machine Hit-Girl (Chloë Grace Moretz) and her quite literal Big Daddy (Nicolas Cage) -- real superhero vigilantes on a quest against Frank D'Amico (Mark Strong). Their quest will transform Kick-Ass' own, from nebulous fantasy to specific goal. Dave's heroic skills never really improve: His YouTube hit is a one-off fluke, like most viral sensations. Still, he eventually exacts justice and gets the girl, just like Peter Parker (something the voice-over carefully points out. You don't need to be a deep comix nerd to get all the references).

Mark Millar's eight-book miniseries has been condensed and cleaned up in predictable, largely unobjectionable ways. His Lizewski is a platonically homely nerd; Aaron Johnson's just a floppy-haired guy pretending not to know how handsome he's going to be once he gets some better clothes. Hit-Girl is still as foulmouthed as can be, but the language of Dave and his friends has been touched up (the word "faggot" is a noticeable casualty). The violence, predictably, is just as juicy. The biggest omission, though, is Millar's meta-game: The point of "Kick-Ass" the comic is to indict the readers as stereotypical nerds longing to identify with a heroic fantasy figure while ignoring the deaths and moral leaps involved. The point of "Kick-Ass" the movie is to kick ass and not worry about it.

Still, "Kick-Ass" is more than meta enough for its own good, serving up ultra-violence with bright pop colors and an admirable lack of moral reserve. The prints of Andy Warhol's "Gun" in the background are a giveaway: This is violence as signifier, no matter how much real-world pain is allegedly getting inflicted, and that goes double for all the bad behavior on display. It's all thrills and no consequences. If you find yourself repulsed, rather than enticed, when Hit-Girl says, "OK, you cunts. Let's see what you can do now," then stay far, far away.

Like "Wanted" -- another Millar graphic novel adapted with relative fidelity -- "Kick-Ass" is unrepentantly gleeful about mayhem. But "Wanted's" improbably curving bullets, falling trains and copious gravity-defying stunts suggested the laws of physics, rather than any mere human, were the real villains. "Kick-Ass," meanwhile, is supposed to be about a guy with no superpowers operating in the real world, a premise demonstrated by the climactic line, "Fuck this shit. I'm getting the bazooka." "Kick-Ass" wants to have it both ways: It wants to be about the consequences (at least the physical pain) of trying to be a superhero when you're patently not, and it wants to be gleefully excessive trash — whichever's more fun at the moment.

If "Kick-Ass" is two concepts fighting it out with equally amusing results, occasionally a third movie pops up in the middle, in which the sugary, "Powderpuff Girls"-esque tunes of early fight scenes get replaced with grinding nu-metal guitars that drain all the joy from the mayhem. In one ill-advised moment, the film evokes the streaming video of the jihadi execution of American soldiers/journalists in an unsubtle, incoherent way. (Or is it just a tribute to "The Dark Knight"?)

But on the plus side, there's "Superbad's" McLovin -- Christopher Mintz-Plasse himself -- as an unlikely and squeaky-voiced mafioso child, and there's Nicolas Cage continuing his recent comeback streak. Just like its title promises, there's a sense of trashy vigor, and a commitment to instant disposability.

Vadim Rizov is a Brooklyn, N.Y., freelance film writer. His work has been published on IFC's Indie Eye blog, Sight & Sound magazine, the Village Voice and Greencine, among others.

Vadim Rizov is a Brooklyn-based freelance film writer. His work has been published on IFC's Indie Eye blog, Sight & Sound magazine, The Village Voice and Greencine, among others.