They've been at each other's throats all season. Which one will make it to the Fashion Week finale? 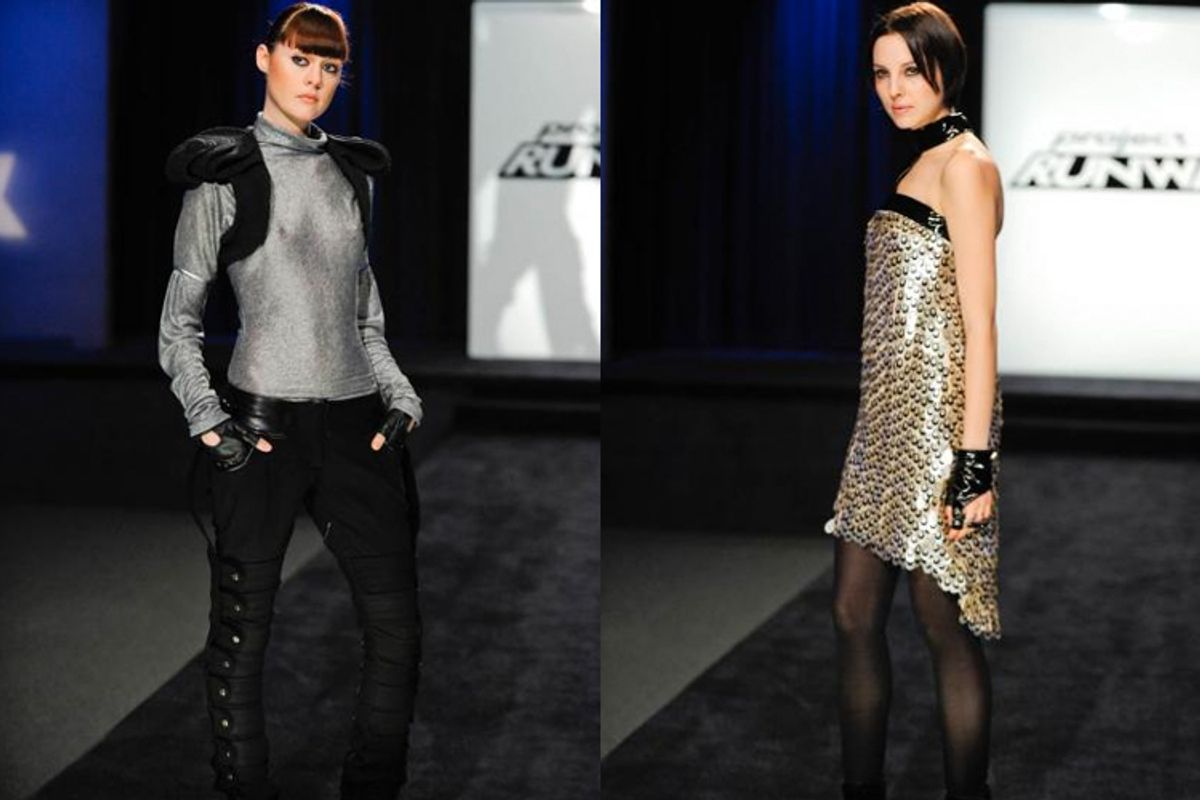 This is the week when the "Project Runway" designers are given $9000 and four months to design their collections to show at New York Fashion Week. You may recall that Emilio and Seth Aaron are definitely showing collections. Mila and Jay must show three pieces, and then the judges will decide who proceeds to Fashion Week. Which is really sort of a slap in the face. Four months of work and you're told to beat it.

Despite the unfairness of it all, it is my favorite episode of the season: lots of Tim Gunn giving his best critiques, spouting impressive vocabulary and sitting at uncomfortable dinners with relatives and mothers-in-law.

The show starts off with quite a bit of braggadocio. Mila claims her "point of view is better" than Jay's. Emilio is "going to Bryant Park, bitches" with yet another show-stopper. It would be nice to see a bird poop on him. Or for him to trip. Something mildly humiliating. Seth Aaron says something that gets so bleeped out that I can't even understand what it is. Fuck yeah, Seth Aaron.

Fast forward three months, and we see Tim on his rounds. First stop: Vancouver, WA to visit Seth Aaron and his rather ordinary-looking wife and children. No black nail polish or faux-hawks to be found.

Seth Aaron has a rack full of tough-looking jackets and coats that are black or leather or both. They're spectacular. (Surely you've figured out my bias for non-pretty things by now). He has also been very prolific. Tim is stunned by the sheer number of pieces and he claims that people will be on their feet after the collection is shown, but... he doesn't think Seth Aaron will win. There is no surprise in the collection. Seth Aaron swears some more then decides he can re-conceptualize.

After telling SA to start over, Tim plays Pictionary with the kids and guesses "fallopian tubes" for one of the drawings (it was a stethoscope). He then jumps on the trampoline and shows us that he has absolutely no coordination. I don't like seeing him fall on his ass. So vulnerable that way.

The next stop: Emilio in New York. Tim meets Emilio's brothers and we are given a (quite cool) little history lesson about what the South Bronx was like in the '70s and '80s. Emilio was influenced by the graffiti and the birth of hip hop. His unfinished collection is a hodge-podge of jewel tones and something hideous that he calls "spray-painted brocade." Tim hates everything and tells Emilio not to waste his time. Emilio tells the cameras that Tim never wore women's clothes so he has no idea what women want to wear. Tim is quite irate by the end of the conversation and tells Emilio that the collection lacks sophistication and looks old. SNAP! Emilio remains cocky.

Mila in Los Angeles is next. Her entire home is filled with black and white patterned accessories and wall art. Good Lord, she even has a dalmation. I notice the spots are not exactly even though. Her collection is mostly black and white. Wait, there's also aubergine. Tim tells her it looks conservative and matronly. Mila is shocked but takes it pretty well. She discusses Jay with us, the audience, and says, "I don't want to lose to that little [bleep]." A lovely dinner with her parents and supportive boyfriend follows. There are no pictures of the female reproductive system.

The last Tim visit is with Jay in San Francisco. Jay has been inspired by Japanese samurai and geisha. There are lots of appendages sticking out of his garments. Tim warns Jay to edit it because it runs the risk of looking like a student collection. The absolute kiss of death, apparently. Jay then says something adorable about a cuckoo Chanel girl. I want to be one.

Dinner with Jay's family is next. Jay's mother is tickled to meet Tim ("I only see you on TV") and his dad looks thoroughly confused during the whole thing. Jay says his dad has no idea what Fashion Week is.

Fast forward again: it's Fashion Week! Mila and Jay enter the hotel room and awkwardness abounds. However, they have their Lifetime moment, forge a bond and stop hating on each other.

Seth Aaron arrives wearing a fedora and plucked brows. Everyone discusses the Westin hotel Heavenly Bed (TM). Tim arrives and bestows two-cheek fashion kisses. Everyone heads to the workroom, and Mila and Jay are informed that they 1)have to share a table and 2) have to present their three representative pieces on the runway in three hours. Jay's shin guards won't zip and Mila is worried about the lack of color in her collection. They both end that segment by sobbing uncontrollably.

So do I, after the commercial break that follows. A toilet paper commercial bragging that their product doesn't leave pieces left behind. Is this a problem for a lot of people? Then comes the ad for "Deadly Honeymoon," wherein some screwed up shit happens on a cruise ship. This is rounded off by a trailer for a movie starring Jennifer Lopez looking impossibly hip and thin.

Finally it is time for the runway. Heidi isn't pregnant anymore. Mila shows an asymmetric collared coat, a striped tunic/coat hybrid, and a rather gorgeous paillette mini dress. All black and white, of course.

Jay shows a zippered purple mini dress, a silver top with slim pants and the famous shin guards, and a jacket with a huge collar. We get to see some longer judging, which is a treat.

Heidi really likes Mila's pieces and says they're simple with a twist. Michael has never really been a big Mila fan and still isn't. He thinks it could have been edgier and doesn't look modern. Nina is concerned about her narrow point of view and wonders what will happen if Mila has to do six collections per year.

Heidi thinks Jay took his collection up a notch. Michael loves the trousers and the "gaiters"/shin guards. He quips pointedly (at Mila, I'm assuming), "There is nothing that is retro about this collection." Nina likes the impeccable tailoring and that the pieces are innovative. She's worried about over-embellishment and Jay's ability to edit.

The designers are sent backstage while the judges deliberate. Michael gets into quite a tizzy with Heidi. He thinks it is better to start with something that is over-designed and rework it, because that's what designers do. He then babbles in Yiddish. Nina is surprisingly non-committal about her choice.

The designers return. It is down to the question of who is ready to show a collection. Mila will be going to Bryant Park, and Jay and his fabulous scarves are going back home to San Francisco.

Next week is the season finale, where a winner will be declared. And I will finally get some sleep on Thursday nights.