Watch interviews with protesters from the rally in Freedom Plaza, in Washington, D.C., on April 15 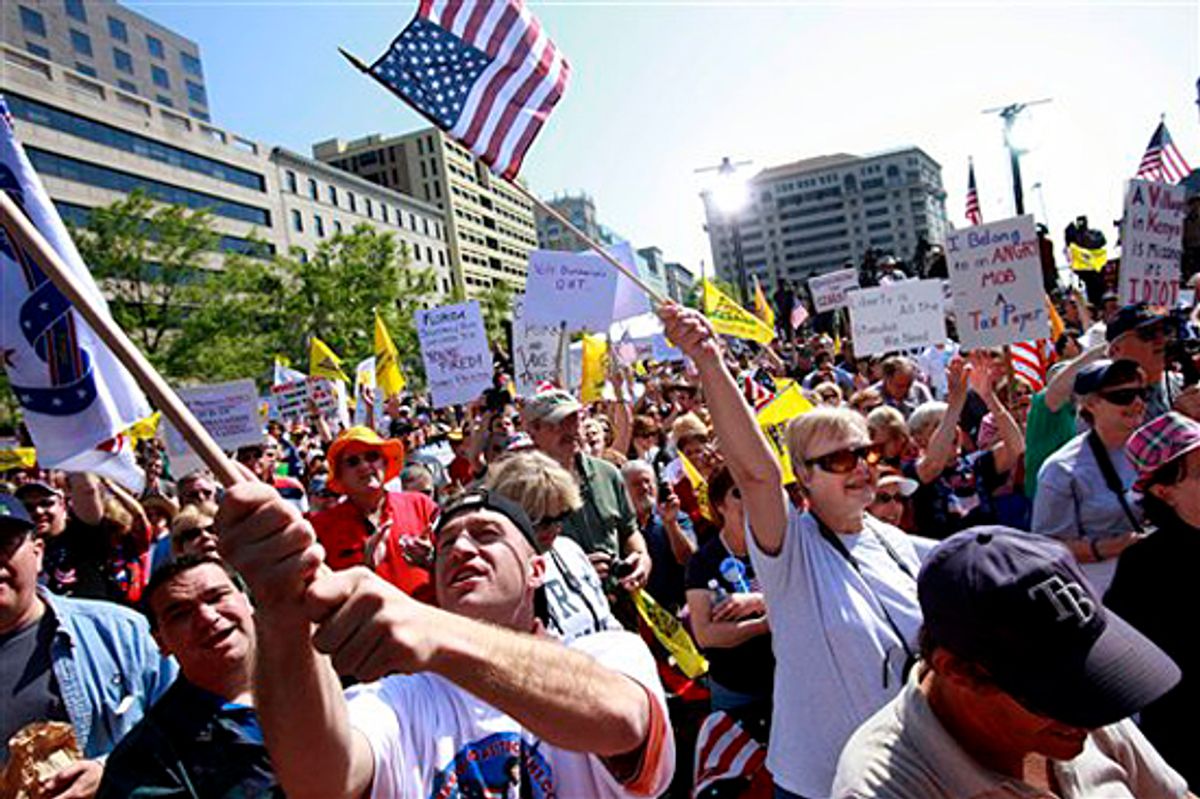 By now, a year after the Tea Party movement burst onto the American political scene, it's pretty easy to tell there's a conservative rally going on in Washington -- just look for people on the Metro carrying big yellow "Don't Tread on Me" signs and chatting about Glenn Beck.

The rally sponsored by Tea Party Express in Freedom Plaza on Thursday, to mark tax day (and the one-year anniversary of the movement), wasn't much different. Stage where Republican members of Congress and right-wing talk radio hosts spouted conservative dogma for several hours? Check. Crowd of protesters who looked whiter, older and wealthier than the population of the city they'd descended on? Check. Signs and buttons saying things like "Don't Tax Me, Bro," "Socialism Always Runs Out of Other People's Money" and (classiest of all) "Barack Obama: Time for a Pee Party?" Check. Anti-government rally jarringly being held in the shadow of the Ronald Reagan International Trade Center, one of the most expensive federal offices ever built? Check. (There was even the requisite "Go Back to Kenya" sign, though these days, you never know whether the people carrying them are Birthers or saboteurs.)

Speakers like Rep. Michele Bachmann, R-Minn., and ex-"Saturday Night Live" star Victoria Jackson revved up the crowd. "These people that run Washington, D.C., seem to be perfectly content with presiding over a decline in our economy," Bachmann said. "They don't realize that your IQ scores are way above average. We're onto them. We're onto this gangster government." Bachmann sounded like she had forgotten she was actually in the government. "Government doesn't have any money -- they don't make money!" she said. "It's all of us, the private economy -- we're the ones that make the money! We're the ones that are the producers! They're the consumers! They consume what we produce! And I'd say it's time for these little piggies to go home."

Jackson's appearance was even weirder. "Freedom!" she yelled, walking on stage. Wearing what looked like a star-spangled flowerpot on her head, she confessed she hadn't really ever paid attention to politics until 2008, when she heard that "someone was running for president who was left of Hillary, and I was like, what would left of Hillary be? Communist?" She ran through all the "proof" that Obama is a Communist (his parents were Communists, his grandparents were Communists, he read some Saul Alinsky books), and sang a few verses from some of her songs. She bashed Joe Biden's "big fucking deal" open-mic comment, saying, "I don't think George Washington would use the F-word." By the end of her rambling 10-minute appearance, she had the crowd chanting, "There's a Communist living in the White House!"

And many of the people at the rally seemed to agree with her. The gripes they had were all fairly similar: taxes are too high, the healthcare bill is illegal, the government is helping poor people too much. Taxes, of course, have gone down for most Americans since President Obama took office -- Citizens for Tax Justice reported this week that the median tax cut this year was about $600, and many people got larger cuts. But you wouldn't know that from listening to the speakers on the stage, or from talking to people in the crowd.

One family, the Lynches, drove 10 hours from outside Detroit to come to D.C. for the rally -- and after a little bit of sightseeing, they planned to hop back in the car Thursday night and go back. They sat off to the side of Freedom Plaza, talking about the problems of the nation with Alberta Bertuzzi, of Rockville, Md., who was sitting next to them.

Complaints about taxes being unfair -- especially to the rich -- were common. That was what brought Ann Fitzgerald to Washington from Vestal, N.Y.

The same gripe brought Douglas Cunnington from Atlanta to Washington. He's quite sure Obama is a Communist, and got involved in the Tea Party movement after the inauguration last year.

And then there was Mike Butka, who was walking around wearing a t-shirt with the logo of the ultra-right wing John Birch Society. Butka had taken the MARC train from Baltimore to Washington, because it was cheaper than driving; it didn't bother him that it was a government-run transit agency.

Finally, here are some scenes of the crowd at the rally. The music is "A Bailout Song," as performed live in Freedom Plaza by Ron and Kay Rivoli. (You can listen to the original here.)