The timing of the SEC fraud charges looks suspicious, but right now, attacking Wall Street works for the Democrats 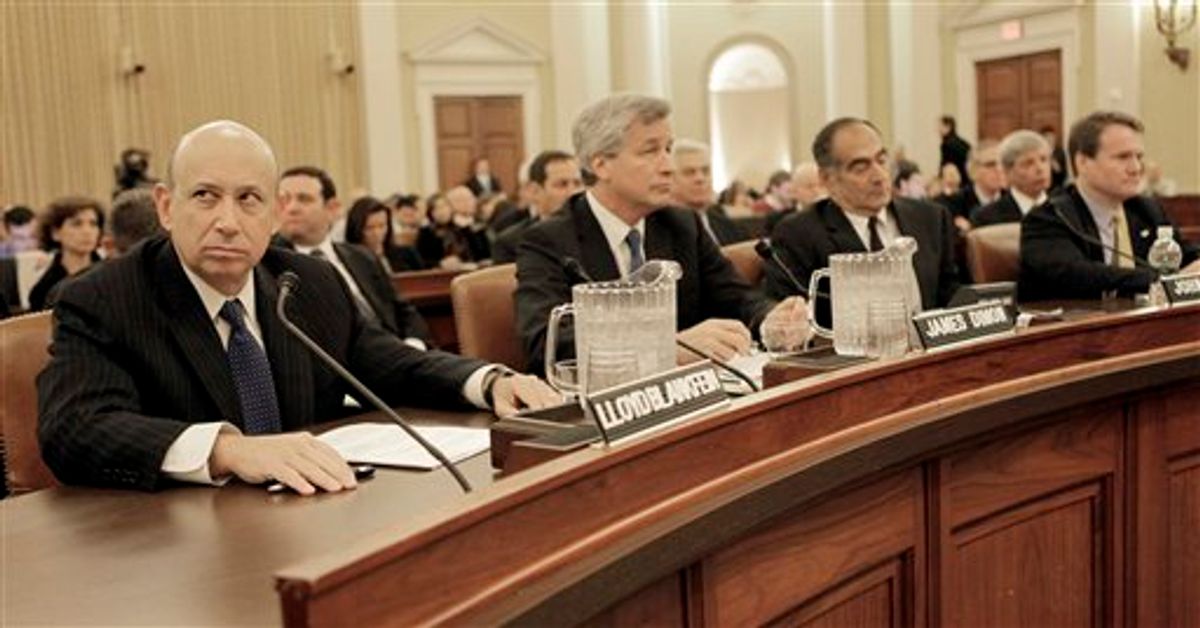 An e-mail from Barack Obama arrived just as I was wading my way through the the SEC's complaint accusing Goldman Sachs of securities fraud. What an amazing coincidence -- the president wanted to talk with me about "Wall Street reform"!

We cannot delay action any longer. It is time to hold the big banks accountable to the people they serve, establish the strongest consumer protections in our nation's history -- and ensure that taxpayers will never again be forced to bail out big banks because they are "too big to fail."

Banking reform has been up front and center in Washington this week, and Senate Majority Leader Harry Reid is promising to bring the bill put together by Sen. Chris Dodd to the floor as early as next week. So it's not much of a surprise that the White House would be trying to rally support. But the timing of Obama's missive is so exquisite -- within an hour of the SEC dropping its Goldman bomb -- that one immediately has to wonder: Did the SEC coordinate with the White House for maximum political effect? Goldman Sachs is, after all, the poster boy for Wall Street arrogance and power. How fortunate for the Democrats that just as Republicans started a campaign to paint their financial reform bill as too friendly to Wall Street, the government brought the hammer down on the investment bank that everyone loves to hate? (Adding fuel to the fire: On Friday, the administration also launched something called "The Financial Fraud Enforcement Task Force" at the Web site StopFraud.com.)

As Slate economics writer Dan Gross tweeted, "now would be a good time for Chris Dodd to redub his [bill] "The Goldman, Sachs Restraint Act of 2010" and bring to the floor for a vote."

Or maybe not. Early Friday afternoon, the Huffington Post reported that Senate Minority Leader Mitch McConnell had succeeded in getting all 41 Senate Republicans to agree to sign a letter expressing opposition to the current bill, and perhaps even committing to vote against even starting debate on the measure next week.

As I write these words, there's some confusion as to whether the 41 letter signees are really ready to take the politically explosive step of filibustering the opening of debate on the bill, or are just declaring that they want to "encourage" Reid to move a more "bipartisan" bill. The display of GOP recalcitrance, if true, is impressive, but also risky. The Democrats are licking their chops at the prospect of more GOP obstructionism.

And why not? The situation would seem tailor-made for the White House. The government can point to the SEC's crackdown on Goldman Sachs as evidence of concrete determination to rein in Wall Street, and at the same Democrats are pushing legislation that, while far from perfect from a progressive standpoint, is certainly better than the status quo. (For a thoroughly convincing response to conservative criticism of the bill, this press release from the FDIC makes a rather strong case.)

Certainly the White House can't be unhappy with the SEC's decision to charge Goldman with fraud. If you are going to be relentlessly attacked by both left and right for bailing out Goldman Sachs, you might as well embrace criticism engendered by striking an adversarial stance. And make no mistake, bringing charges against Wall Street's best and brightest is not a trifling matter.

Sure, BusinessInsider mogul Henry Blodgett is already saying that he doesn't think there's much for Goldman to sweat over, that a couple of months down the line the bank will simply pay a big fine to make it all go away. But so far the stock market appears to be regarding the affair a bit more seriously. Goldman's shares were down 13 percent with less than half an hour to go before the end of trading. Time's Steven Gandel says any time an investment bank is charged with securities fraud it is "a big deal" and speculates that CEO Lloyd Blankfein will ultimately be forced to resign. And if Goldman ultimately has to make good the losses suffered by the clients that got burned on the designed-to-fail securities it sold them, the financial impact could be quite significant.

No matter how you parse it, there is now some meat on the bones of the perception of the Obama administration as being in some way "anti-Wall Street." Earlier this year, when the White House responded to Scott Brown's surprise victory in Massachusetts by suddenly adopting harsher-than-usual political rhetoric against the banks, it was easy to dismiss the pivot as nothing more than words. Charges of fraud against Wall Street's premier financial institution are a different order of business altogether.