Journalism today: A haven for parasites and double-dealers

Don't be fooled by this week's Pulitzer glitz. The state of journalism is sorrier than ever 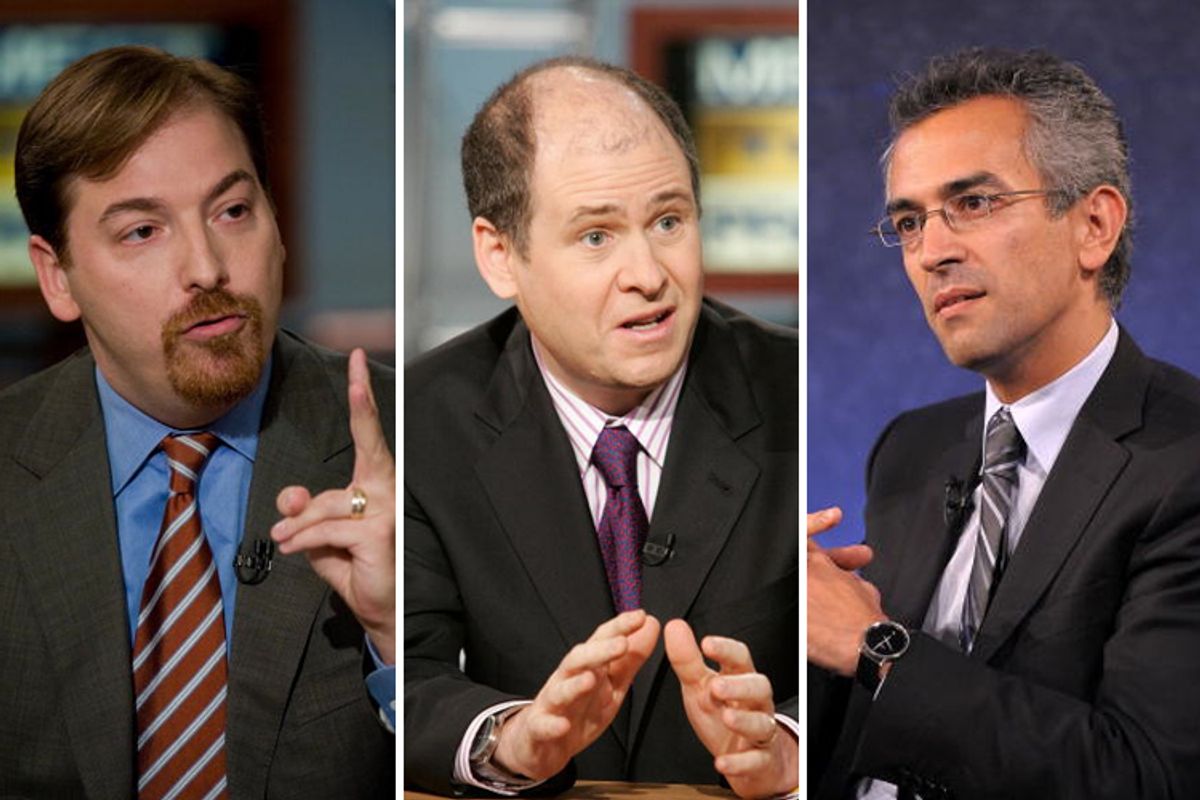 No matter how much this week's Pulitzer Prize triumphalism hides it, the fact remains that journalism these days is "a disaster," as Ted Koppel said recently. And unfortunately, retrospection dominates the news industry's self-analysis. Like dazed tornado victims, most media experts focus on what happened and why, oh Lord, why?

The queries are important, though just as critical are two prospective questions: 1) If, to butcher a Chinese aphorism, every crisis is an opportunity, then who is making an opportunity out of journalism’s current crisis? and 2) Are those opportunity maximizers actually parasites destroying journalism for the long haul?

The answer to the initial question is three groups, starting with the Access Traders. These are reporters like the New Yorker's Ryan Lizza, Newsweek's Jonathan Alter and NBC's Chuck Todd, who, while covering politics for major media, are also signing separate contracts to write books chronicling White House gossip. Facing a crisis in audience share, these correspondents' employers encourage the double-dip opportunities, hoping book exposure will result in residual attention. But the simultaneity is problematic: As the Washington Post's Howard Kurtz notes, hard-hitting stories in these reporters' day jobs "might alienate potential [book] sources and flattering ones might loosen tongues."

The dynamic's deleterious effect on journalism is obvious.

"The oozing conflicts lead to things like a glowing New Yorker profile of [Obama aide] Rahm Emanuel followed by an even more one-sided love letter to [Obama aide] Larry Summers, both from Lizza," says Salon.com's Glenn Greenwald. "It's what causes Alter to proclaim one day — when Obama favored it — that real health reform 'depends on whether Obama gets approval for a public option' only to turn around — once Obama said [the public option] was unnecessary — and proclaim that the Left is foolishly obsessing on the unimportant public option. And it's what leads Todd, in the form of 'covering the White House' for NBC, to serve as an amplifying vessel and justifier for whatever the White House happens to be saying."

Add to this the Double Agents — those making opportunities out of journalism's revenue crisis. Knowing cash-strapped media outlets are providing platforms to corporate advocates rather than spending extra money to employ their own independent voices, various chameleons at once posture as journalists and get paid as business spokespeople.

Richard Wolffe, for instance, has appeared on MSNBC as a supposedly objective pundit while also being employed by a business advocacy firm. Likewise, Jeff Birnbaum heads a lobbying and P.R. company while writing a Washington Times column — and a recent one that attacked Democrats for defying industries that pay his company.

Birnbaum, of course, was previously the Washington Post correspondent covering the lobbying industry, and so his career shift also puts him in the last group: the Former Watchdogs.

To understand why these turncoats so threaten journalism, consider not only Birnbaum, but also Stephen Labaton. This New York Times financial reporter just announced he is taking a job with Goldman Sachs — a move that makes you wonder whether Labaton watered down his Times coverage in order to get his new gig.

As with similar revolving-door situations, it's a legitimate worry — after all, Labaton knew Goldman probably wouldn't hire a muckraker who had been aggressively exposing bank transgressions. Then again, maybe Labaton did nothing wrong. Either way, though, the damage is done, because the concern can — and must — be aired, which itself helps destroy the idea that traditional news is impartial and trustworthy.

In aggregate, this all ends up answering the original query: Are many of today's opportunity maximizers destroying journalism? Clearly, yes — and unless the media sachems institute some basic ethics rules, the parasites within their ranks could end up making sure there's no journalism industry left to save.