November 2010 is looking awfully good for the GOP. But November 2012? Not so much 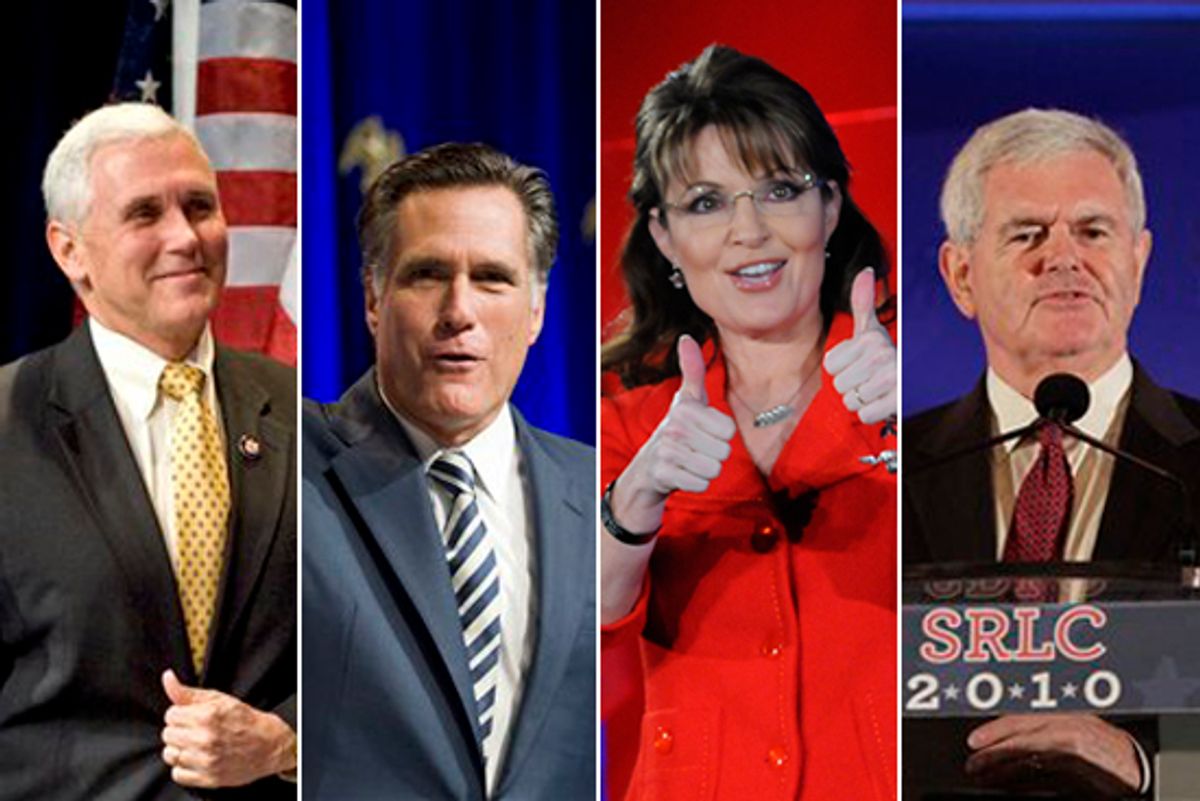 Talk to most Democratic activists, and they'll concede that a Republican takeover of the House this fall is entirely possible. Some will even contemplate the nightmare scenario of losing the Senate, though that remains arithmetically improbable. But they’ll cheer right up when talk moves to 2012.

The reasons for this midrange optimism are many. Though President Obama's approval ratings are nowhere near the post-inaugural peak they reached early last year, he remains the most popular figure in national politics. There’s also the possibility that the economy will have improved enough by 2012 to sweeten the country’s mood.

More to the point, smart Democrats understand that one of their chief liabilities right now figures to be an asset in 2012: the shape of the electorate. Turnout in midterm elections invariably skews toward older and whiter voters. Yet Obama’s 2008 performance varied inversely with age categories and also depended on a historic ethnic-minority turnout that isn’t about to be repeated in a midterm election. Add in the ripe targets, particularly in the House, created by two straight boffo Democratic cycles, and it should have been clear the very day after the 2008 elections that Democrats were cruising for a bruising in 2010 — even before the economy sank to its ultimate depths and well before the first Tea Party protest.

The 2012 electorate, by contrast, should look more like that of 2008. Not content with their midterm advantage, Republicans have done a lot to brand themselves as the party of angry old white people: the GOP’s conspicuous identification with the Tea Party movement, and the campaign to mobilize Medicare beneficiaries against healthcare reform are two examples. This will build a demographic trap for the GOP future, particularly since the radically conservative mood of the Republican base has eliminated any strategic flexibility to reach out to younger and darker (or female) voters.

After all, Karl Rove’s famous Bush-era initiatives to expand the GOP via comprehensive immigration reform (aimed at Latinos) and No Child Left Behind (aimed at women and African-Americans) are now part of the conservative narrative of “betrayal” that Republicans must now promise to foreswear forever.

But its demographic noose is less evident than an even bigger GOP problem for 2012: the party's likely presidential field. This is not something Republicans much like to talk about. When questioned about their uninspiring cast of would-be presidents, most mutter about “how early” it is and vaguely suggest there will be “fresh faces” who will somehow emerge from the midterm election cycle and sprint to the White House. Read this cranky statement from New York Times columnist David Brooks when challenged about the lack of leadership in the GOP:

Last week, everybody was talking about Palin and Newt Gingrich, the two television personalities, but real live Republicans are mounting serious challenges for office in real states. Representative Mark Kirk is running for Senate in Illinois, one of the smartest members of Congress today. Rob Portman, a former director of the Office of Management and Budget, is mounting a serious challenge for Senate in Ohio. There are few people as decent and well informed as he is. In California, business leaders Meg Whitman and Carly Fiorina are running pretty well in the polls. But nobody seems to cover them much because the Sarah Palin circus is perpetually in town.

Meanwhile, Gov. Chris Christie in New Jersey has embarked on a brave effort to actually balance a budget.

As Brooks would probably admit if pressed, none of these people, with the possible (but still very unlikely) exception of Mitch Daniels, are going to be running for president in 2012.

And history suggests that it's already too late for someone new to emerge. It's been a very, very long time since anyone first won major statewide office in a midterm election and then immediately launched a credible run for the presidency. Yes, Ronald Reagan announced his presidential candidacy on the very eve of the 1968 Republican Convention in a half-hearted effort to deny Richard Nixon the nomination. And yes, in 1976 Jerry Brown had a meteoric late run that crashed and burned after a couple of primary wins. But that’s about it in recent history. Plus, the cost and difficulty of running a successful presidential campaign have increased almost exponentially since the '60s and '70s. Some like to point to the current resident of the White House as evidence that anything can happen, and happen fast, but Obama had already become a national political celebrity before he was elected to the Senate in 2004, four full years before his election to the presidency. If there’s an Obama lurking in the back benches of the Republican Senate Caucus these days, he or she has been well-hidden.

Republicans, like or not, are probably stuck with the presidential field they now have. And it’s not a pretty sight.

Polls now show three Republicans bunched at the front of the pack — Mitt Romney, Mike Huckabee and Sarah Palin. Romney is almost certainly running, but he failed to make an emotional connection with GOP voters in 2008. And doing so in 2012 will be even tougher, now that Romney is stuck trying to explain to Republicans the difference between Obamacare and the plan Romney imposed on Massachusetts.

Huckabee may or may not run. (Interestingly, he and his wife just registered to vote in Florida, a somewhat more important state in the presidential nomination process than his native Arkansas.) But he is viscerally disliked by GOP elites and conservative gabbers alike, and he is haunted by a gubernatorial record littered with tax hikes and pardons.

As for Palin — well, as Brooks says, she’s a circus. But if she runs, she'll win a lot of votes and suck up an extraordinary amount of grassroots enthusiasm, money and attention. She’s almost perfectly engineered to do well in the low-turnout Iowa caucuses, a state where conservatives are obsessed with opposing gay marriage (which was legalized in Iowa last year). But she almost certainly can’t win a general election in any political environment. That, not fear, is why Democrats love to talk about her, all but openly egging her on to run.

And then there’s Gingrich, whose prominence in the emerging 2012 field is the best example of how hard-up Republicans really are. This man managed to become a national pariah just months after becoming Speaker of the House in 1995. His disastrous strategy for dealing with Bill Clinton, from the government shutdown (which he is urging Republicans to emulate if they retake the House this year) to impeachment, was a textbook case of bad leadership and squandered political opportunity. He was unceremoniously dumped from office in 1998, and although he’s changed wives and religious affiliations since then, he’s pretty much the same ol’ Newt. This is a “fresh face?” One might as well ask Lamar (!) Alexander to dig the plaid shirt out of his closet and run for a third time.

Sure, there some dark horses. Tim Pawlenty has some insider support but no discernable rationale for a candidacy — and a personality that makes Mitch McConnell look charismatic. Indiana Rep. Mike Pence, a conservative favorite, could try to become the first sitting House member to win a presidential nomination since 1896. John Thune's main qualification seems to be that he looks very pretty on television. And then there's Mississippi Gov. Haley Barbour — just in case Republicans want to nominate a former big-time professional lobbyist who also sounds like Foghorn Leghorn. Nor should we forget Rick Perry and Jim DeMint, who have made a recent habit of saying things that are every oppo researcher’s dream (for example, Perry’s flirtation with secession and DeMint’s contemptuous references to public schools as socialistic “government schools”). And Rick Santorum, whose early campaign has been little more than an extended apology to his fellow right-to-lifers for his 2004 endorsement of Arlen Specter. And finally, there’s Ron Paul, who if he runs, will definitely be a problem for any Republican rival who has to debate him, as he was in 2008 with his challenges to Republican foreign-policy orthodoxy.

Admit it, Republicans. This is a pretty weak field — and a perilous one. If anyone feels a sense of déjà vu, it’s because the field looks a lot like those of 1996 and 2008: some has-beens, some never-weres, some egomaniacs and some crazies. There may not even be a Bob Dole or a John McCain in this mix — the kind of candidate who can reassert adult control and at least lose gracefully in the general election.

So let Republicans enjoy their 2010 comeback. It was all but foreordained by the last two cycles, and by the very demographics that threaten the GOP in the long run. Allow them to celebrate their “fresh faces”; they'll have a lot of fine options for the vice-presidential nomination in 2012. But their 2012 prospects will go straight downhill starting on Nov. 3, 2010. That's when Republicans will have to start to deal with the consequences of their recent bout of self-indulgent destructiveness, when they'll begin choosing someone to take on Barack Obama not in press conferences or talking points or Tea Party protests, but in a presidential election.