Fighting for Ke$ha's right to suck 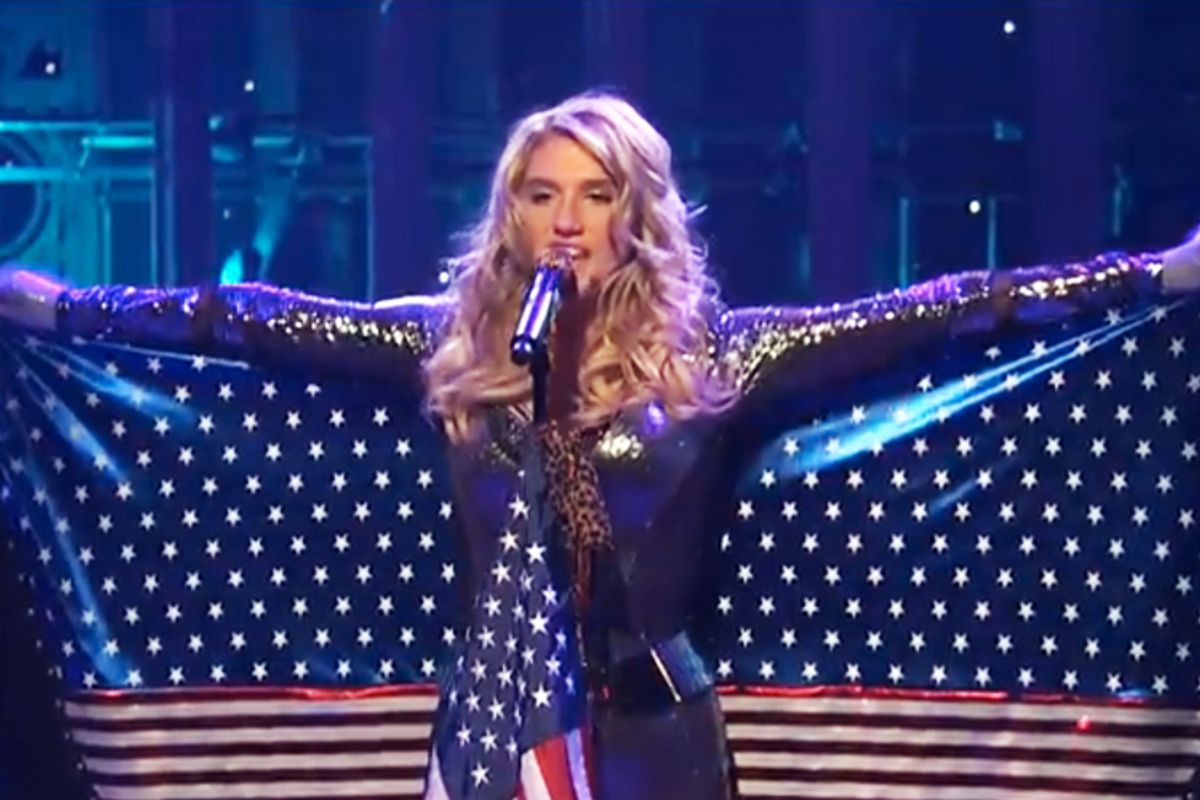 Just how terrible is Ke$ha? The 23-year-old, whose "Tik Tok" has attained anthem status among the drunk girls at your local TGI Friday's, hasn't exactly been a critical darling since she popped up on the music scene last year. Her catchy, tinny songs about drinking and partying, combined with an uncombed, makeup-smeared image, have made her this year's candidate for pop's slickest, most unconvincing bad girl.

But when she made her "Saturday Night Live" debut this weekend, it aroused an unprecedented level of gleeful vitriol. Entertainment Weekly called it a "train wreck." Blemish.com, less charitably, dubbed it "retarded." And it's true that one would certainly exhaust a whole lot of other adjectives before landing on "entertaining." For her first number, "Tik Tok," she clad herself in a stars and stripes cape that is, in truth, a tough look to pull off. But for an ostensibly badass artist who's had a worldwide No. 1 hit, she was as fluid and sexy as the "Trololo" guy. As Jezebel writer Hortense astutely notes, the turning point in the whole performance came roughly 40 seconds in, when she glanced off to the side, more like a nervous kid than the "Animal" of her debut album. But that was glorious compared to what happened next. For "Your Love Is My Drug," she borrowed from Sia's 2008 glow-in-the-dark look with a nod to Olympic aboriginal ice dancing to do a tribal routine that effectively put to rest any notions that the girl can sing or dance. Let's put it this way: Fergie isn't losing sleep.

Pop music, like high school, is all about creating a persona and sticking with that table in the cafeteria. You've got to decide if you're the straight-up hot chick (Beyoncé), the fragile yet tough chick (Rihanna), the girl next door (Taylor Swift), the crazy, attention-getting art chick (Lady Gaga). The former Kesha Rose Sebert was once just another aspiring singer-songwriter, doing backup vocals and shopping around her own music. Then, in rapid succession, she sang on Flo Rida's smash "Right Round," inserted an ironic dollar sign in the middle of her name and became an aspiring Pink – a femmey, rough rocker who might cut a bitch.

Despite the studious artifice of any successful pop artist's image, there's generally some kernel of credibility to it. Pink may be hardworking, nice Alicia Moore from Doylestown, but she probably really would cut a bitch. And somewhere under all of Lady Gaga's wigs, one can clearly see Stefani Germanotta, piano-playing musical theater lover. Poor Ke$ha, on the other hand, didn't just bomb out on "SNL" the other night -- she revealed herself to be the Oakland of musical artists, a woman apparently without a there there.

But is she just a hollow vessel, an unfortunate collection of dance hooks and silly costumes? Maybe not. Despite the undeniable mediocrity of her "SNL" appearance, she's also the woman who co-wrote the Veronicas' "This Love," which is a pretty delightful song. She's an ambitious, even serious performer who's said, "If you want to be a legitimate artist, it’s more important what you say no to," claming no interest in being just "some sexpot."

So if Ke$ha's songs and moves are just shy of terrible, well, have you watched Madonna's "Everybody" lately? If Madge were a young unknown and did that number on late night right now, America's eyeballs would start spontaneously bleeding in horror. Anybody remember how obnoxious the Beastie Boys were when they started out? Maybe Ke$ha, given her ambition and nascent abilities, will mature into a better artist and performer. Maybe she'll just enjoy this sparkling moment of fame and recede from the limelight, becoming the next Linda Perry-type songwriter and producer. Or she'll be like Aimee Mann and Robyn, singers who had fluke hits early on and roared back into smaller but successful -- and critically acclaimed -- musical careers in the ensuing years. Just because she sucked on Saturday doesn't mean she's the worst thing in music, ever. Because even people with No. 1 albums and dollar signs in their names deserve a chance to grow.