Secrets, lies and big revelations wrap up this unconventional tale, but then it sinks into old familiar quicksand 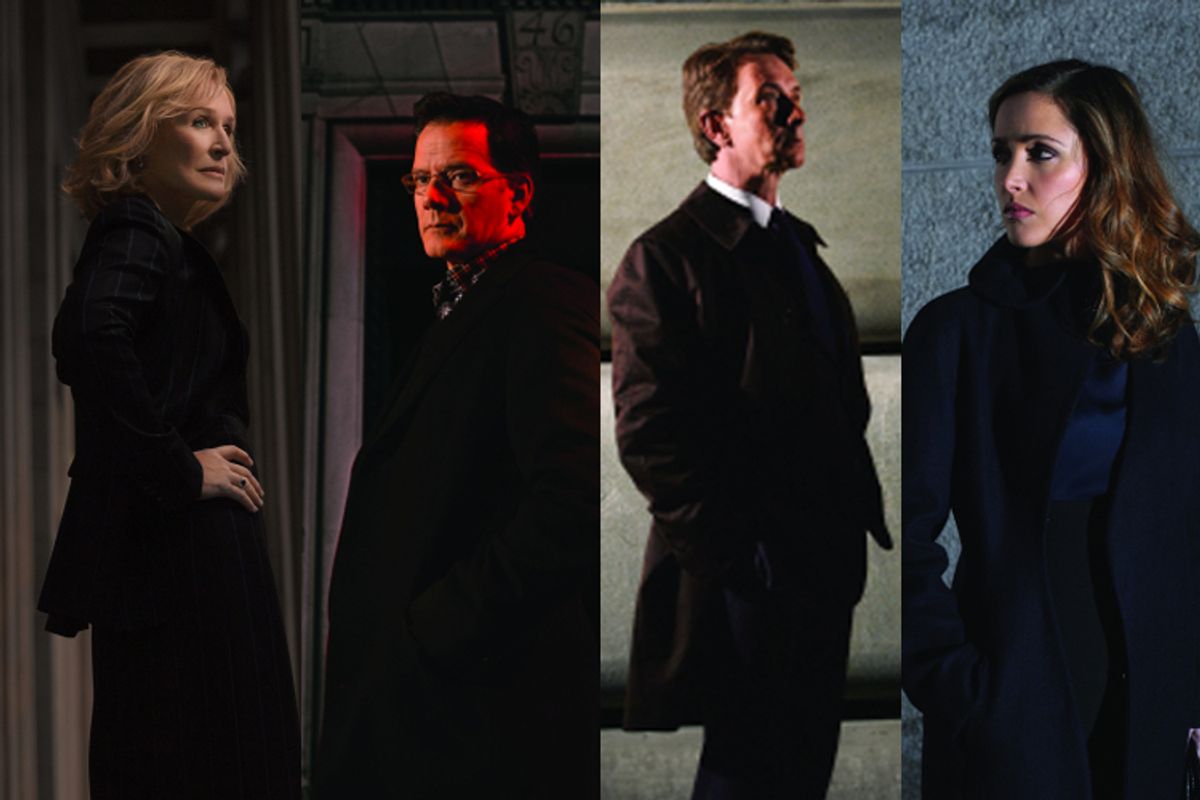 (Spoiler Alert! This review includes dozens of spoilers for Monday night's finale of "Damages." If you haven't watched the finale yet and plan to do so, don't read this review.)

"You've accomplished everything you set out to do. Is it worth it?" – Ellen Parsons to Patty Hewes

Bad parents sacrifice their kids for their careers. Good parents sacrifice their careers (and themselves) for their kids. That was the moral of the third season finale of "Damages," from the revelation that Louis Tobin's entire Ponzi scheme was set up to save his son Joe's career (He wasn't evil after all! He was just a really good dad… who defrauded people to help his son out of a jam!) to the discovery that Patty essentially killed her own unborn child (by going on a long, ill-advised walk in the country) so that motherhood wouldn't prevent her from leaving her small home town to go to law school.

But  bad parenting was a running theme all season, with Ellen's sister smoking meth despite having a young baby at home, Marilyn Tobin allowing her son to kill his own daughter, Tom Shayes blowing the family fortune, Patty trying to pay off her son's older lover, then having her sent to jail for sex with a minor, and poor Leonard Winstone's real father blackmailing him to get his hands on a little Tobin cash. If a morality tale can be likened to an ethical fender bender, then "Damages" represents a 15-car pile-up straight out of "CHiPs."

On Monday night, after a season of wondering who killed Tom Shayes (Joe Tobin, in the bathroom, by drowning him in toilet water in a fit of rage) and who crashed into Patty's car (her son Michael, also in a fit of rage) and who else would end up dead (Marilyn Tobin, by suicide) and who would land in jail (Arthur Frobisher, Wes Krulik, Joe Tobin, Michael's girlfriend Jill), the finale was so packed full of last-minute twists and turns that the show's writers could hardly smash them all into the 90-minute episode. The writer's accomplished everything they set out to accomplish. But is it worth it?

That's a good question. "Damages" is that odd show that offers intriguing dialogue and smart, weighty scenes, but the final pay-off, even though it's thrilling and unpredictable, still feels a little empty. Once all the cars go smash on "CHiPs," you have to stop and ask yourself, was it really worth wrecking all those perfectly good Buick Regals? Do we necessarily buy that Marilyn Tobin would, on the one hand, stand back and let her son kill his own daughter but then, on the other hand, try to take the fall for Tessa Marchetti's death? Do we really believe that Joe Tobin, a man who was consumed by big moral questions at the start of the season, would get drunk and drown Tom Shayes in a toilet bowl?

Even those twists can be forgiven, though, since they're part of the fun on a splashy, suspend-your-disbelief thrill ride like "Damages." The major disappointment at the end of season three was the retreat to easy Evil Career Lady/Bad Mommy stereotypes in the 11th hour. Last season we found out that Patty had a stillborn baby. Revealing that the death was her choice certainly fit neatly into the premise, and dovetailed with the many strained relationships on the show that reflected the constant need to rebalance personal life against the pressures of career success.

Somehow, though, on a show with two unconventional female leads who never fit into the typical sexed-up notion of femme fatale or devouring witch, who battled each other with strange passive aggressive slights instead of jumping into the nearest pool and ripping each other's blouses off, it was sad to see everything get boiled down to a homemade abortion. "Is it worth it?" Ellen asks, but we can see the answer in Patty's grim look, and in the flashback to her weeping all over her dead baby's grave. After weeks of restrained one-upmanship and seething and careful chess moves, after three seasons of demonstrating that Patty is emotionally withdrawn and retreats into work not because she craves success more than anything else, but because she can't handle the discomfort and unpredictability and lack of control presented by intimate relationships, after months of presenting this riveting character as one that defies outdated archetypes, it all boils down to this: A dead baby, and a bad Mommy.

Is it worth it?