Which lawmakers -- and would-be lawmakers -- have taken the most cash from the controversial securities giant? 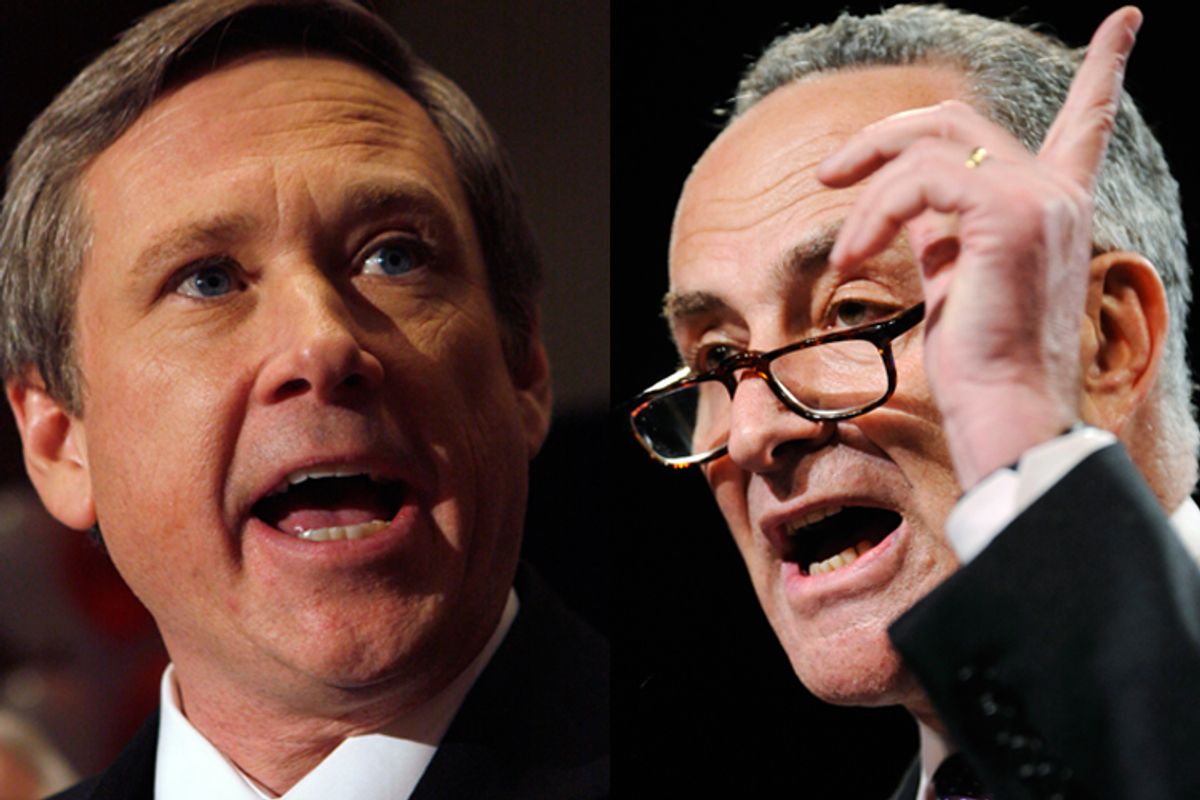 " Every so often a term enters the public square that takes on significance far beyond its true meaning," Rep. Michael McMahon wrote in an Op-Ed for The Hill last June. In this case, the New York Democrat argued, that term was "derivatives" -- bets, essentially, on the future value of other financial instruments.

The source of the financial meltdown, he wrote, was caused not by derivatives but by the bad apples that sometimes trafficked in them. With the House considering expansive financial reform legislation, McMahon warned his colleagues against an "overreaction" to the financial crisis.

The derivatives he was defending are back in the news, with the Securities and Exchange Commission now alleging that banking giant Goldman Sachs sold shady financial products to buyers without telling them that they were designed to fail.

It may be that McMahon, in taking a position that was so favorable to the banking industry, really believed his Op-Ed's headline: "Misunderstanding derivatives endangers Main Street." Or maybe he just knew where his bread was buttered.

McMahon is the leading recipient of political donations from employees of Goldman Sachs, hauling in over $50,000 so far this election cycle, according to the Center for Responsive Politics. That number includes $4,800 from Lloyd Blankfein, Goldman's CEO, and Gary Cohn, its president.

In addition to that money, McMahon has also received the most cash of any of the 30 House lawmakers who have accepted money from Goldman Sachs' political action committee, taking in $10,000 so far this cycle.

It's unclear if McMahon agrees with the SEC's contention that Goldman is one of the "bad apples" -- and, if so, whether he'll return the money he's taken in. His office didn't respond to a request to discuss his Goldman money.

Nor did Salon receive a comment from Sen. Richard Shelby, R-Ala., the ranking member on the Senate Banking Committee. Shelby is the second-biggest recipient of Goldman Sachs money this election cycle, bringing in nearly $35,000 from Goldman employees, including Blankfein and Cohn. So far, Shelby has opposed Democratic financial regulatory overhaul legislation.

Third on the list is another New Yorker, Democratic Sen. Kirsten Gillibrand, who has raked in $23,800 from Goldman, plus another $5,000 from its PAC. Other major New York recipients include Democratic Rep. Scott Murphy, who took in $23,450 from employees and another $3,000 from the PAC, and the state's other Democratic senator, Chuck Schumer, who got nearly $23,000 from Goldman employees.

While Goldman employees tend to favor Democrats in their giving, Shelby is not alone among Republicans enjoying their largess. Rep. Mark Kirk, the GOP nominee for Senate in Illinois, got nearly $22,000. After his office initially ducked calls from the press (including one from Salon), it was reported Monday night by the Chicago Tribune that Kirk would be returning those funds.

Goldman Sachs also doesn't forget its own former employees, or others who work in the financial sector. Emanuel Pleitez, a Democrat who ran in a 2009 special election for a Southern California House seat, got over $20,000 from the company's employees. Pleitez is a former Goldman financial analyst. Rep. Jim Himes, a Democrat from Connecticut who worked at Goldman for more than a decade, has taken over $15,000 from Goldman this cycle.

Perhaps more notable is the case of Reshma Saujani, an obscure Democrat challenging longtime incumbent Rep. Carolyn Maloney (N.Y.) in September's primary. Maloney, author of the credit card law that President Obama signed last year and a supporter of the executive pay caps that Goldman (and the rest of Wall Street) bitterly opposed, has earned the wrath of the financial services industry -- something Saujani, who is well-connected in the New York finance world, has seized on.

This might explain why Saujani, who never worked at Goldman, took in $7,200 from Goldman employees in the last quarter of 2009 -- when she rasied a total of about $400,000 for her campaign, a jarring sum for an unknown challenger.

Saujani's campaign noted that the Goldman money represents a small fraction of all of the money they've taken in.

“Reshma is not pro-Wall Street or anti-Wall Street," campaign spokesman James Allen said. "She’s pro-jobs and pro-New York City. As evidenced by her over 1,200 donors, she has built a broad coalition of support across the 14th district without accepting a single dime of corporate PAC money from any group."

Just-released campaign finance data from the first quarter of 2010 shows that Saujani brought in an additional $17,700 from Goldman employees, running her total for the campaign to $24,900. (She's also received $4,800 from Lisa Pevaroff Cohn, Gary Cohn's wife.) In total, she's raised just over$800,000. Maloney, by contrast, has taken in $4,400 of Goldman money -- from one retired employee.

Salon received few responses after contacting the offices of all the lawmakers who are the top recipients of Goldman money and who are named in this article. In response to a query about the Goldman Sachs money, Gillibrand's office did send Salon a statement that discussed the Goldman scandal in general -- but not the money that Gillibrand has taken. "We should have zero tolerance for these kinds of alleged investment practices, which is why I am fighting for significant financial reforms that will put consumers' interests first, restore accountability and protect against special interest abuses," her statement read.

That was the most that any of Goldman's favorites was willing to say.