Did authorities overreact to the volcanic ash?

There was no choice but to err on the safe side, but that won't stop the questions. Meanwhile, air travel picks up 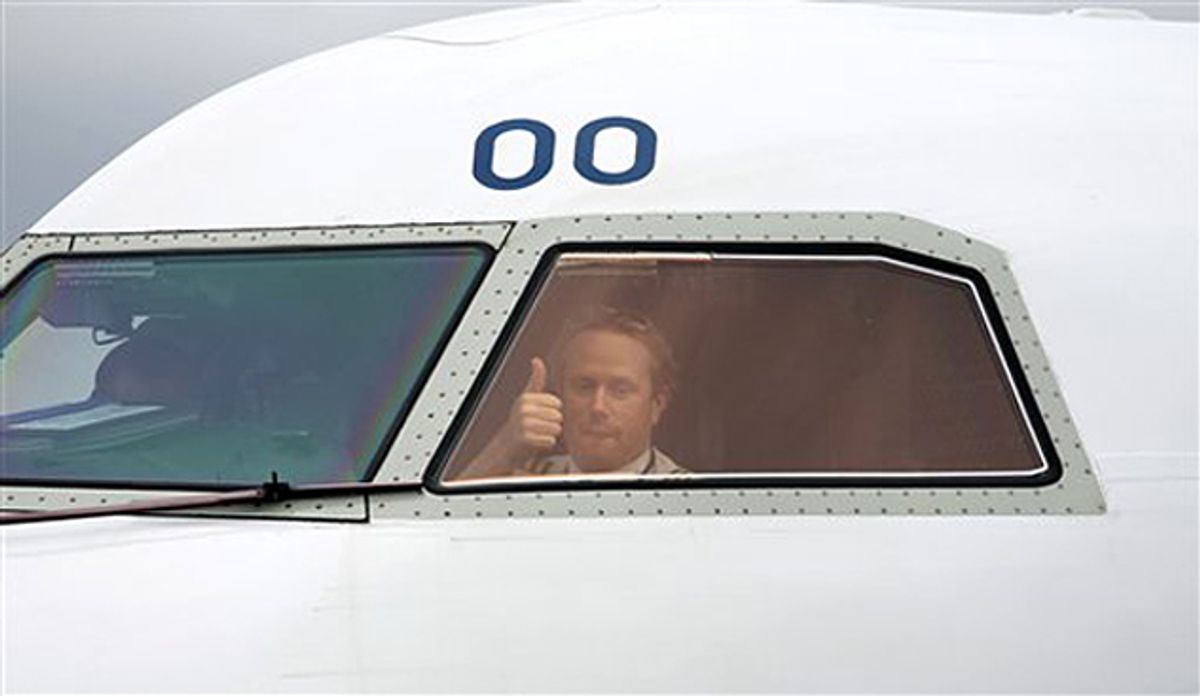 A pilot gives the thumps up to as gets the go ahead to leave Belfast City Airport, Northern Ireland, Tuesday, April, 20, 2010. Europe began allowing limited air traffic to resume, giving hope to millions of travelers stranded around the world when ash from a volcano in Iceland choked the jet age to a halt. (AP Photo/Peter Morrison) (Peter Morrison)
--

Just a few wrap thoughts on the volcano crisis.

The airlines, along with their advocacy groups, have grown increasingly vocal over the past few days, urging that restrictions be lifted and, in some cases, accusing European authorities of having mucked up the whole affair through overreaction and bureaucratic bungle.

Taking that second point first, I'm not sure what we were supposed to expect when a sudden natural calamity affects more than 20 sovereign nations simultaneously. Such events lend themselves to a certain, let's just say, logistical disorientation.

The airlines' comments have, not unpredictably, brought out the cynics. With carriers losing an estimated $200 million daily, it's easy to understand the eagerness to get flying again, but are they being reckless about it?

There are millions of people out there who see airlines as the embodiment of evil on earth, but let me remind you of the immense liability issues at hand. Contrary to prevailing wisdom, airlines are not looking to play fast and loose with the lives of their customers. They have too much to lose. Call me a shill if you want, but remember that I'm a crew member too. Speaking as a pilot, rest assured that I am not particularly eager to put myself, never mind those people on my plane, in harm's way.

Meanwhile, the next chapter in this saga (to borrow an Icelandic word) will be controversies over passenger reimbursements and air carrier bailouts. European carriers are already asking for support, while passengers who paid a few hundred dollars for an airline ticket are, in some cases, expecting thousands in compensation. Is this fair? Who owes whom, and for what? It's a topic that will stoke emotions and fire up anti-airline sentiment. What fun.

Was there an overreaction to the ash? It's impossible to say, but we had no choice really but to err on the safe side. There was too much at stake. The airlines, believe me, realize this in full. They are pushing for resolution; they are not being daredevils.

Indeed things are slowly returning to normal. And that's how we should expect it to happen -- slowly, methodically. This ash cloud is not a localized or uniform thing. It's nebulous and changing, hour by hour, more hazardous in some areas than in others. The skies will reopen sector by sector, not in one wallop.

Nobody is saying the crisis has been handled ideally, but there are plenty of smart, dedicated professionals who have been focused on this problem from the start. All in all, I'd say we've handled it pretty well.

But don't close the book just yet. Eyjafjallajokull continues its angry fuming, and now winds have turned portions of the ash cloud westbound. And scientists are turning their attention toward a second Icelandic volcano, Katla, which has begun to rumble ominously.

The overarching moral here, of course, is that we as humans remain at the mercy of nature. There are those things in the world over which he have little or no control. It's almost funny watching and listening to the frustrations of certain people, who see this crisis as one of human failure rather than simple human frailty.