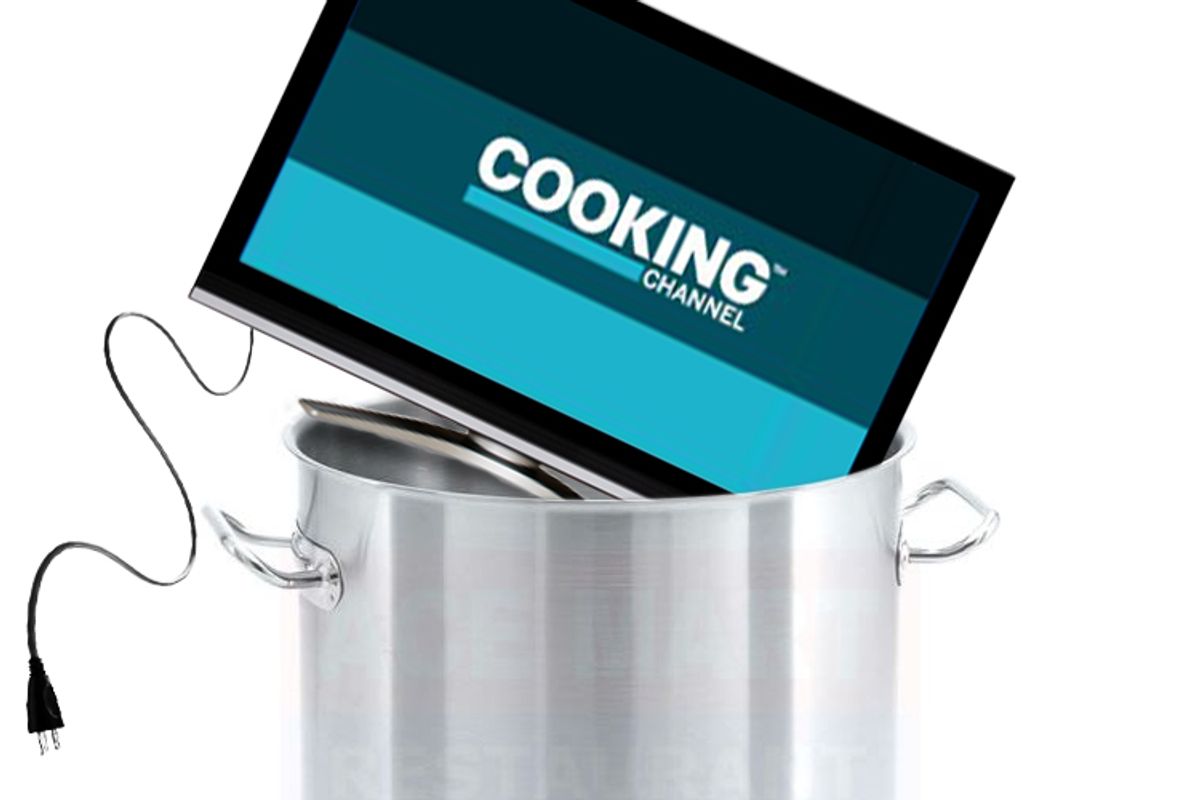 It's been just over a month since Scripps Networks Interactive, the company that owns the Food Network, announced that it was launching another channel of food programming called the Cooking Channel. The network, which will launch on May 31 and which the New York Times described as "The Food Network, the sequel," unveiled its lineup for advertisers yesterday morning in New York. The verdict: a somewhat smarter, somewhat hipper, and less polished version of its predecessor, but nothing that's going to make you sneeze in your soufflé -- call it the Food Network's edgier younger sister.

When Scripps first announced its new endeavor, I spoke to NYU nutrition and food studies assistant professor Krishnendu Ray, who was surprised by the news, in part because " nothing particularly interesting has happened to food television since the Japanese version of 'Iron Chef.'" The format of most Food Network cooking shows, he explained, has long since hardened into three genres: daytime domestic cooking shows, travel shows like "Cook's Tour," and competition programs that turn cookery into a kind of sports competition. The latter feature professionals using skills that few home chefs actually have -- a fact that, Ray argues, makes "cooking more watchable … but also less and less doable."

So does the Cooking Channel inject anything new into the mix? Well, sort of. The lineup is mostly composed of standard food programming, albeit with a few exotic and intellectual twists. "Spice Goddess" and "Caribbean Food Made Easy" deviate from normal fare by focusing on Asian and Caribbean cooking, respectively. "Drink Up" will feature "creative and complex cocktails served by mad-scientist mixologists in sexy lounges." On the more bookish end of things, Foodography will feature host Mo Rocca exploring the "past, present and future of iconic, classic and trendy foods" [Full disclosure: Salon food writer Francis Lam will be appearing on Rocca's show] and "Foodcrafters" will "unlock culinary treasures" from across the country (which I sincerely hope involves people eating things they find in safes).

More surprisingly, the New York Times reports that the channel may start featuring "documentary-style programming on topics like bulimia and obesity," and Ray might be pleased to learn that one show actually bridges the gap between two of the played-out genres (competition and domestic cooking) he spoke to us about. In "Cook Like an Iron Chef," "Iron Chef Michael Symon teaches viewers the skills and techniques needed" to cook like a reality-TV competitor chef -- thereby making high-end cuisine more accessible to at-home cooks.

As Ray pointed out, if the Cooking Channel really wants to change food TV, it should really be looking to other countries -- like Korea -- to find cutting-edge new formats. The network isn't venturing to Asia for programming, but it is going to Canada. As the New York Times reports today, at least six of the network's shows will be imports from the Great White North, including something called "Food Jammers," in which three hipsters assemble food gadgets, "David Rocco's Dolce Vita," and "Everyday Exotic." It's a move that makes sense given Canada's surprisingly wide variety of original cooking-related programming. (Oddly enough, I actually spent two summers working as a production assistant and sous-chef's assistant for a Canadian cooking show called "The Surreal Gourmet," which revolved around former Salon writer Bob Blumer driving around Toronto in a giant toaster.)

What do we take away from this announcement? Obviously nobody has gotten a chance to see many of the shows in question, but based on this lineup, the Cooking Channel sounds like it might, without signaling a massive change, be a small step in a more interesting, more relevant and somewhat hipper direction for food programming on TV. It might actually provide programming that bears some relationship with food itself, as opposed to a relationship with competitive and over-the-top food media personalities. And worst comes to worst, it will at least have one sure-fire bit of quality programming: The network also announced that it will be rerunning old episodes of Julia Child.