Even if he bolts the party and wins as an independent, the clubby Senate's Republicans will welcome him back 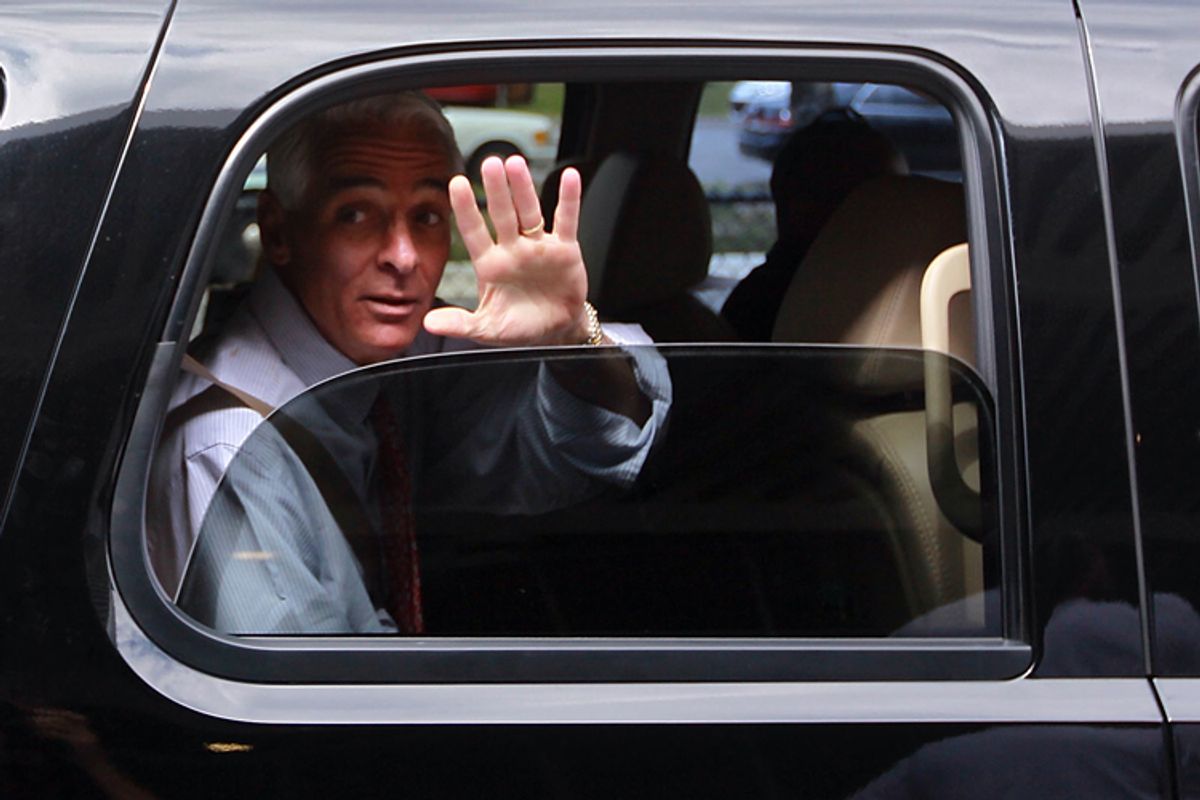 Charlie Crist may soon make himself persona non grata among Republicans, by fleeing the party to escape defeat by Marco Rubio in the Florida Senate primary and running instead as an independent.

But if he does that, and goes on to win a three-way election in November, the GOP might quickly forget about all the drama.

"I think we would welcome him into the caucus," Sen. Lisa Murkowski, R-Alaska, told Salon Wednesday. "If he ran as an independent and won and was back here -- you gotta caucus with somebody."

The Senate is, after all, a famously clubby place -- the kind of place where, on the same day in 2008, Republicans welcomed back a convicted felon (albeit one whose conviction was later thrown out), and Democrats greeted their old pal Joe Lieberman, who had spent the previous year trying to get a Republican elected president. Lieberman, of course, had already left the Democratic Party in 2006. In a potentially Crist-like move, after he lost the party's primary, he ran, and won, as an independent (on the "Connecticut For Lieberman" line). Turned out that didn't hurt him at all when he returned to the fold.

That clubbiness is bipartisan. Which is the reason so many of Crist's potential colleagues endorsed him way back when Rubio was nothing but a right-wing gadfly, mostly because he could raise a lot of money; once the National Republican Senatorial Committee weighed in, the rest of the establishment followed. Only Sen. Jim DeMint, R-S.C., broke with the rest of the herd and supported Rubio. Now, the young Cuban American has become the Tea Party's favorite candidate, and polls show he's virtually guaranteed to beat Crist -- the sitting governor -- in the GOP primary if Crist doesn't drop out by the end of this month.

Many Senate Republicans would prefer not to think about what might happen if Crist quit the party, then showed up in Washington anyway. "That's so many 'ifs' away," Sen. David Vitter, R-La., said Wednesday. A spokesman for DeMint, Wesley Denton, said his boss didn't bother worrying about how Crist would be received if he tried to caucus with the GOP. "Senator DeMint believes Marco will win that race," even if Crist runs an independent campaign, Denton said. Senate Minority Leader Mitch McConnell (whose own pick in Kentucky's GOP Senate primary, Trey Grayson, may lose to Tea Party favorite Rand Paul) told CNN on Sunday that Crist would forfeit all GOP support if he went independent. For the most part, Senate Republicans seem to think Rubio will win, no matter what Crist does.

That doesn't mean they'll hold it against Crist if they're wrong. "I like Charlie, I hope he wins the primary -- but I'm a Republican," Sen. Lindsey Graham, R-S.C., told me. He'll support the nominee, whether it's Crist or Rubio. But if Crist wins the general election? "I think we'd want him to caucus with us -- I would," Graham said.

And that kind of attitude won't exactly endear the GOP establishment to the Tea Partiers who are fueling Rubio's campaign. "That would be typical Republicans talking," Everett Wilkinson, the organizer of the South Florida Tea Party, said in disgust. "[Crist] would probably be at home with the behind-the-doors people in Washington, D.C. ... I really think he's leaning to go independent, which is certainly his choice. Perhaps it might be a better route; maybe he should change his card to progressive or Democrat or socialist, while he's at it."

For now, Crist is still a Republican. But in the end, he says he'll do what he thinks is in the best interests of the people of Florida.