Did Madonna get "Glee" into the groove?

The queen of pop spices up the show-choir dramedy, but it still needs help to pull out of its current nose-dive 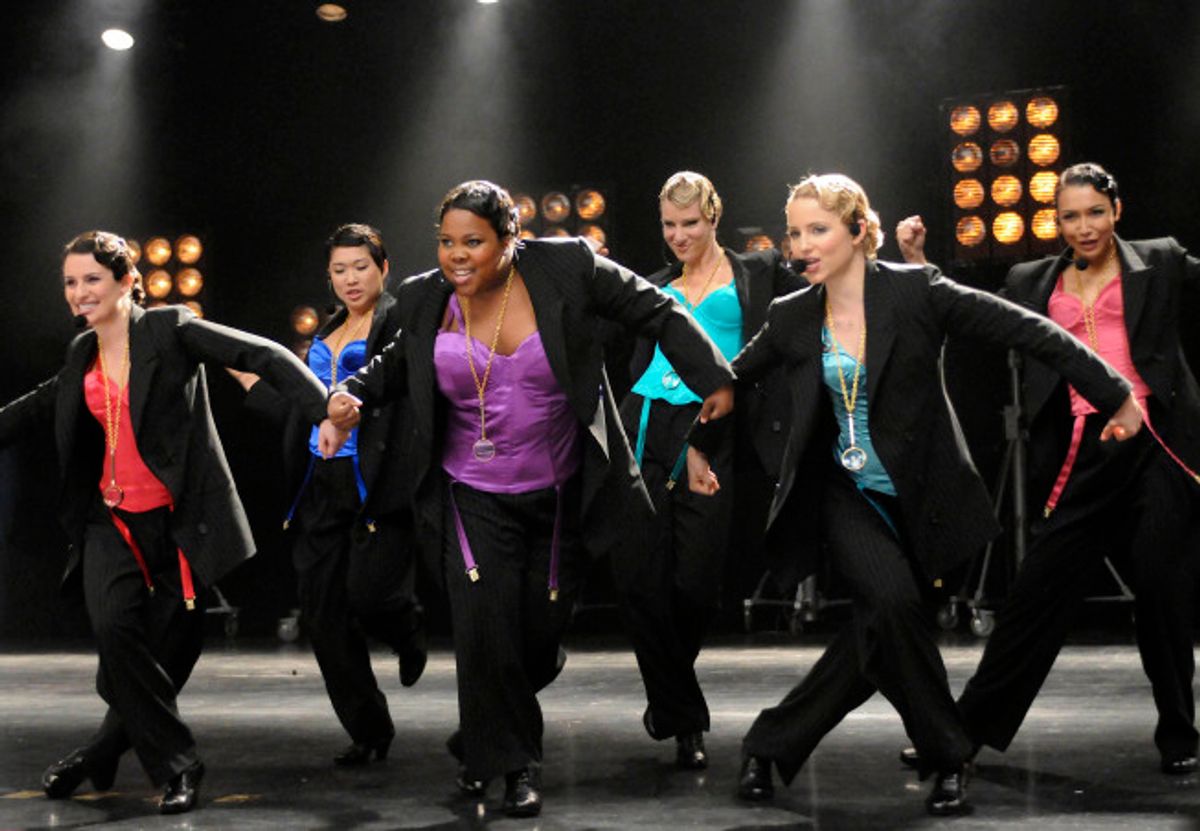 "More than anything, Madonna's musical message is about equality." – Will

"I need to take control of myself and my body just like Madonna, which is why I'm planning on doing the nasty with you tonight at your place." – Emma

"Trust me, the way to get a man to follow you forever? Take his virginity. Madonna, like, wrote a song about it." -- Brittany

A Madonna-themed episode of "Glee"? How could that possibly go wrong? Millions of viewers tuned in on Tuesday and found out quickly: One clunky, ham-handed scene after another in which characters explained what they were thinking, then told us how it related to Madonna, then sang songs by Madonna. No real story, no natural dialogue, and very few good jokes in the mix.

Luckily, at least some of the performances were dynamic: Rachel and the girls tackled a rousing version of "Express Yourself," the whole glee club plus a gospel choir took on "Like a Prayer," and best of all, the show featured a memorable rendition of "4 Minutes to Save the World" with the high school marching band playing along to Kurt (Chris Colfer) and Mercedes (Amber Riley) singing. Finally, it looked like "Glee" was firing on all pistons again.

Unfortunately, though, the rest of the musical numbers ranged from pretty good (bedroom-fantasy "Like a Virgin") to not great (boy band a cappella version of "How It Feels for a Girl"). Rachel and Finn's duet of a Madonna mash-up ("Open Your Heart" and "Borderline") was probably the worst of the lot, badly arranged and awkwardly choreographed. (What's with all this running around, knees bent, arms by sides, rotating in little circles and over-emoting at each other? We've seen this, what, every time these two have a duet?)

Along with more songs with the marching band, here's what "Glee" needs to return to its former greatness:

1. A plot. There's no story to "Glee" anymore, just talk that serves as filler between songs. Giving Rachel a new boyfriend, Jesse (Jonathan Groff), was a good idea. So why not build a real story around him, instead of offering one quick flashback of them together, then focusing on Rachel, improbably asking the choir girls for advice about sex? How are we supposed to care about this story or any other when it feels so rushed and cursory? Obviously someone at Fox gave the writers a note: More songs! Wall-to-wall songs, damn it! But without any good storylines, this show is about as compelling as going to see the same high school show choir perform week after week after week. And speaking of which, we could really use some ...

2. New blood. We can't see the same handful of kids perform over and over. Sure, they're talented, but if we have to watch Rachel or Finn sing a solo every single week (which we do, thanks to the fact that the show is nothing but songs now) we're out of here. Get some new rival choir members outside of Jesse into the mix, and while you're at it, dream up some good stories for them. And when they sing, give them ...

3. Better choreography and staging. Given that the show is now wall-to-wall songs, you won't have the resources to manage this. But with fewer songs, you'd have more time to make the three or four you do tackle really good. Stop giving us circling cameras. No more predictable cheerleading routines. No more arms by sides, knees bent, faces melting in painful longing. Do you know how many truly talented choreographers out there would be just thrilled to jump in and make these musical numbers artistically interesting and provocative? Hint: Start with Wade Robson.

4. Less psychoanalysis. All of a sudden, Will Schuester (Matthew Morrison) is talking like a shrink in every single scene, and it's beyond dorky, not to mention unrealistic. "I had to find this new person inside of me, the one that was OK with what happened," Will explained to Finn last week, recognizing how much high school boys love to break down the emotional layers to every experience. "You took ownership of your body when you told me that you weren't ready," Will told his girlfriend Emma, who for some reason didn't take ownership of her fists and sock him in the face for being such a girly man.

5. New jokes. Sue Sylvester (Jane Lynch) teases Will about his hair a lot, and it's not funny anymore. People think Rachel is a loser, and that's not all that funny either. Hire a few new comedy writers, or just take another pass at the jokes you have. This is still a comedy, right? Every joke feels like a rehash of one from the pilot. You need fresh jokes to make the show worth our while. Don't let the wheels come off just as your popularity is peaking.

Look, "Glee." We still love you. We just want you to get your mojo back. As Will Schuester would say, "That show, that made all the bad choices? That's gone! This new, more experienced, more interesting dramedy is here. This is about being OK just being you." That's right -- quirky, weird, mean-spirited, hyperactive, dorky you. Good luck, "Glee"!