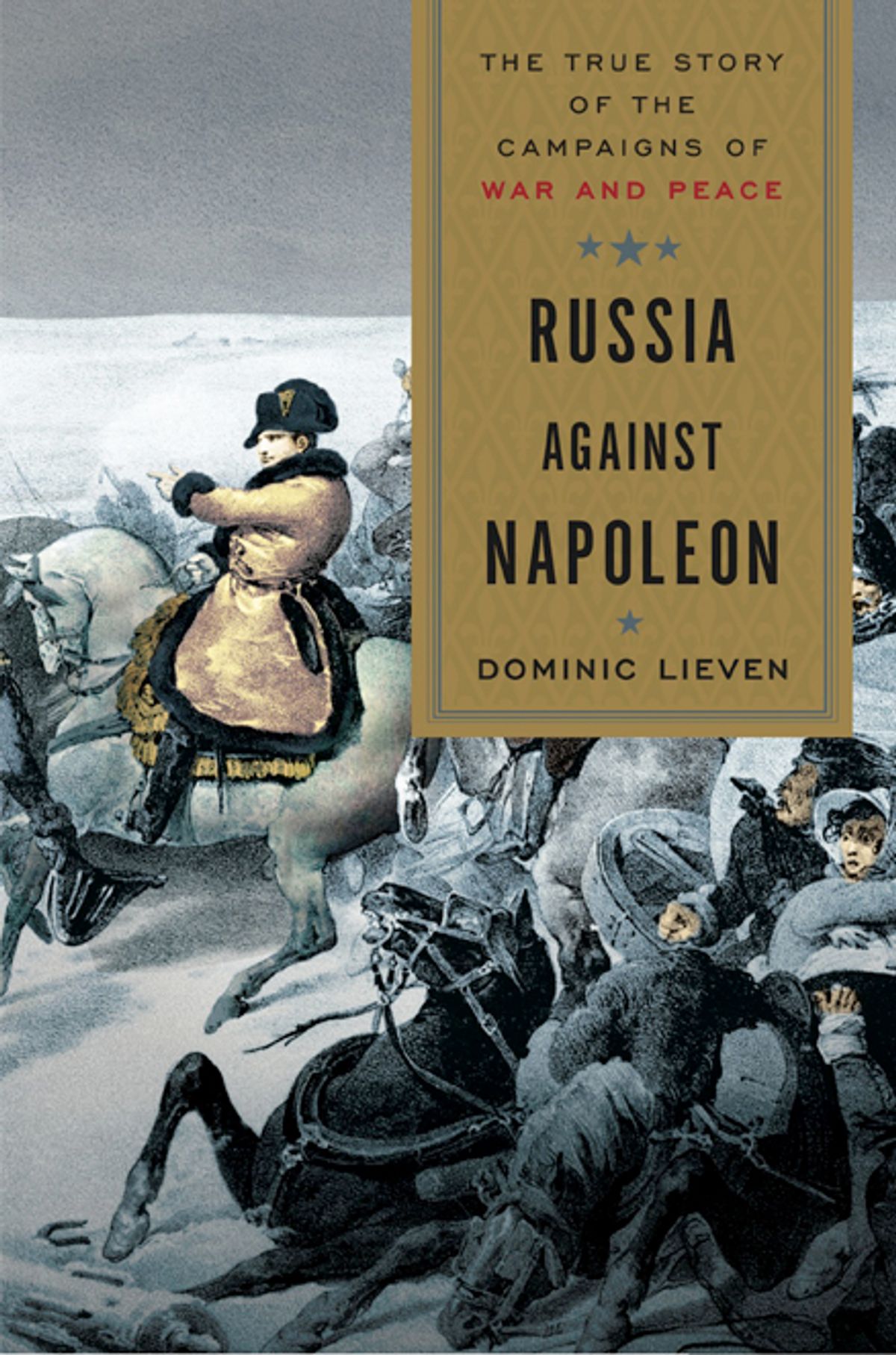 "Brave descendents of courageous Slavs! You always smashed the teeth of the lions and tigers who sought to attack you. Let everyone unite: with the Cross in your hearts and weapons in your hands no human force will defeat you." With these words, Tsar Alexander I appealed to the Russian people to join the fight against Napoleon's Grande Armée, which began pouring into Russia at the end of June 1812.

Much has been written about how and why Napoleon came to lose more than a half-million men in the Russian invasion. Hitler and his generals even studied the ill-fated campaign hoping to avoid making similar mistakes. But missing from Western scholarship on the Napoleonic Wars is a full-fledged account of how Russia came to smash Napoleon. With "Russia Against Napoleon: The True Story of the Campaigns of War and Peace," Dominic Lieven, one of the preeminent scholars of 19th-century Russia, aims to fill the void, tackling not only the French invasion of 1812, but also the battles of 1813-1814. What sets Lieven's book apart from the handful of other accounts is his prolific use of Russian sources, particularly regimental histories available to Western researchers only since 1991.

After Napoleon destroyed the Russian army at Austerlitz in 1805 and drove the Russians out of Poland, it was only a matter of time before another showdown occurred between the two powers. Russia was unhappy about losing Poland and being compelled to adhere to the Continental System, which circumscribed Russia's ability to trade, to the detriment of its economy. Faced with economic collapse, Tsar Alexander I decided to ignore France's blockade against Britain. Napoleon, who abhorred disloyalty, vowed to make Russia see the error of its ways.

Intelligence collected by Russian agents working in Paris in 1810, as well as military intelligence gathered in 1811, suggested that Napoleon wanted a quick, decisive victory. Alexander and Minister of War Mikhail Barclay de Tolly refused to give Napoleon the war he wanted. Instead, they made plans for a long defensive war -- one that would last at least two years or more. Initially avoiding a big battle, the Russian army would systematically retreat further into Russia, drawing out and weakening French supply lines. As Alexander explained to Prussia's Frederick William III: "This system is one which has brought victory to Wellington in wearing down the French armies, and it is the one which I have resolved to follow." Adopting this strategy also meant forsaking Austrian and Prussian support. Russia would have to go it alone.

The Grande Armée began crossing the Neman River into Russia in late June 1812, but it would take Napoleon more than two months to force engagement with the retreating Russians. At the Battle of Borodino on Sept. 7, Napoleon won the day, but failed to destroy the Russian army. As Russia's forces retreated, Alexander faced the choice of defending Moscow or saving the army. He chose the army. After installing himself in the Kremlin, Napoleon made what Lieven regards as a "fatal mistake" by dallying in Moscow for six weeks. The emperor foolishly believed that Alexander would accept his peace overtures. He also thought he could manipulate the Cossacks into revolting or, failing that, ignite the Russian peasants into dethroning their tsar for forsaking Moscow. After a month it became clear that Napoleon was the one who had been duped; he had no choice but to retreat.

Lieven calls "mostly nonsense" the idea, posited by Napoleon and his admirers, that the brutal Russian winter destroyed the French army. The Grandee Armée, exhausted from marching across Europe and living on poor rations, was in bad shape even before the fighting began. Indeed, most of the army had perished by December when the weather became unusually fierce. As Lieven writes: "The basic point, however, is that Russian Novembers are cold, especially for exhausted men who sleep in the open, without even a tent, with very inadequate clothing, and with little food." What crippled the Grande Armée was a poor supply line.

For the first half of his book, Lieven wages a surreptitious war with Leo Tolstoy's "War and Peace," which has shaped cultural and historical perceptions of the Russian war against Napoleon. Tolstoy the novelist celebrates the patriotism of the Russian peasant, while heaping scorn on the feeble brains of the professional soldiers. Lieven shows that professionalism and planning -- along with patriotism -- carried the Russian army through to the end. The Russians stored six months' worth of food at strategic points. They made sure that each battalion was properly outfitted. The Russian army that met the Grand Armée wasn't a ragtag peasant force, but a rationally planned fighting machine.

While Tolstoy finishes his tale in 1812, Lieven believes the real story doesn't end until 1814, when the Russian army marches triumphant into Paris. The experiences of 1812 resulted in a better-trained Russian army, prepared to fight the campaigns of 1813-1814. Consider the logistical accomplishment alone: 500,000 Russian soldiers were regularly fed and clothed as they fought and marched to Paris and back.

Lieven attributes the omission of the battles of 1813-1814 from Russia's grand military narrative to the fact they were fought to restore the European balance of power. Alexander understood that defeating Napoleon and his French empire -- thereby securing Russia's future security -- required helping Prussia and Austria shake off the Napoleonic yoke as well. If you're constructing a patriotic mythology, it is much easier to celebrate the sacrifices of the men who fought at Borodino to defend Russian soil than to laud the Russian contributions to the battles at Kulm, Leipzig, and Craonne, which were fought in Prussia as part of a coalition.

Lieven also throws another wrench into Russian patriotic mythology by singling out the pivotal role played by the horse. "In many ways the greatest hero of the Russian war effort in 1812-14 was not a human being but the horse," he writes. The "enormous superiority" of the Russian light cavalry, which he regards as the most disciplined in Europe, prevented Napoleon from getting food or rest as he retreated from Moscow. In 1814, the cavalry intercepted French dispatches detailing Napoleon's plans and the weak spots in Paris's defense.

In addition to the corrective provided to Napoleonic military history, the book is an achievement in another regard. Lieven paints a vivid portrait of the Russian home front, which takes the book beyond the realm of military affairs and into social history. In order to fight Napoleon, Alexander appealed to the people's patriotism, religious sentiment, and xenophobic fears. Such appeals were important when roughly 1 million men were drafted between 1812 and 1814. Alexander also adeptly courted the support of the nobility, who controlled most of the food, fodder, horses and manpower required by the army. Lieven is also at his best when describing the organization of a Russian regiment and the bonds that formed between the men.

Having waged a long campaign with the Russians, Lieven deserves accolades for crafting an insightful and sometimes mischievous book. It will be difficult in the future to discuss the sweep of the Napoleonic Wars or debate what country deserves credit for defeating Napoleon without giving Russia its due. In many ways, Lieven's book is akin to the works on the Eastern Front in the Second World War that have provided a corrective to the dominant Anglo-American narrative. Hopefully, this is the first of more to come.