Can technology cool the planet?

Why desperate scientists are considering outlandish ideas, from brightening clouds to dumping iron into the ocean 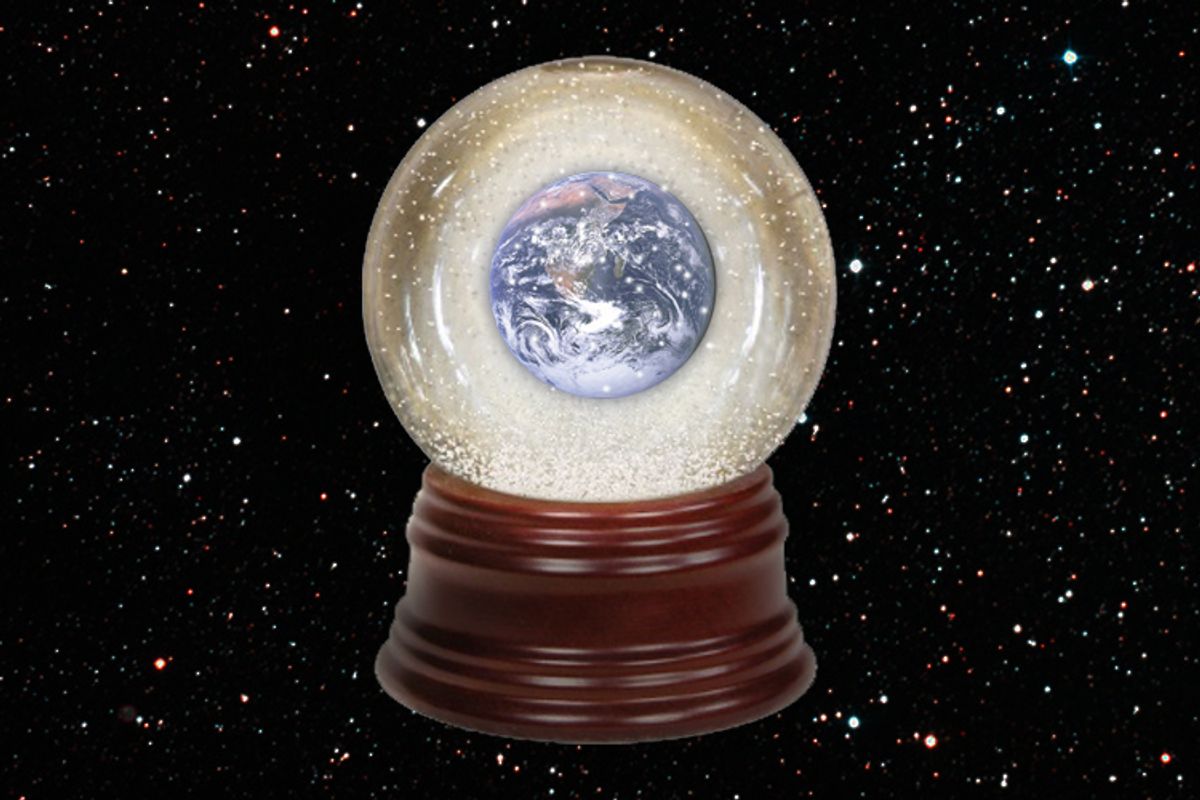 These days, it's hard not to feel disillusioned about the fight against global warming. The 2009 Copenhagen climate summit failed to create a binding agreement to reduce CO2 emissions, and predictions about the impact of climate change are growing increasingly dire (some are predicting an ice-free Arctic by the end of the decade). Recently, many scientists have begun to embrace the notion that, barring a massive policy change, we're going to have to learn how to live with global warming. (It's a sobering fact that even if emissions drop to zero today, existing CO2 will keep our planet warm for the next several centuries.)

As Rolling Stone contributing editor and frequent New York Times contributor Jeff Goodell explains in his fascinating new book, "How to Cool the Planet," this has led some members of the scientific establishment to reconsider the radical option of geoengineering -- using technology to physically bring down the global temperature. The possibilities being considered include shielding the world from the sun's rays by releasing particles into the stratosphere and using specially-built remote-controlled ships to increase the reflectivity of marine clouds. These notions may sound far-fetched, but in the case of an ever-worsening global calamity, Goodell argues, they could play a dramatic role in making the planet more habitable, quickly.

As he outlines in his book, each of these options comes with its own set of ethical, environmental and political questions. Who should pay the costs of an expensive cooling program? How do we keep terrorists from using geoengineering to ruin the planet? And how do you get world leaders to agree on the temperature of the planet, if they can't even sign an agreement to cut CO2 emissions?

Salon spoke to Goodell over the phone about the cooling options at our disposal, the feasibility of CO2-sucking machines, and how geoengineering can teach us to appreciate nature.

For a long time these global cooling ideas were considered ludicrous, but in recent years they're actually being seriously considered. What's changed?

I think it's political failure. There's been lots of talk about how important climate change is -- lots of magazine covers about green business -- but we're not getting together the political will to actually do anything in a serious way about reducing emissions. I think a lot of serious-minded people are beginning to think, What happens if we need to cool off the planet?

In the book you visit David Keith, a Canadian scientist working on a machine to extract CO2 out of the atmosphere. How feasible is such a machine as a solution for climate change?

I think in the long term, the management of the planet is going to require CO2-removal devices of some sort. There are a lot of people working on it, but it boils down to a simple economic question: Can we capture CO2 at an economical price? Right now, the answer is no. David and others wouldn't disclose exactly what it cost, but the ballpark figure is about $150 per ton removed from the air. That's about two to three times more expensive -- at least -- than conventional kinds of CO2 removal. But we're still at the Wright Brothers stage of exploring this. This is not something that were' going to be doing for another 30 to 40 years.

How applicable is sun-blocking technology in the short term?

The two most plausible options for cooling off the planet immediately are cloud brightening and putting particles in the atmosphere. Cloud brightening would change the world's albedo [or reflectivity] by spraying tiny particles, smaller than one micron, into marine clouds so they're a lighter color and their tops reflect more sunlight. We know this works because we've seen ship tracks create clouds from the particles off their engines. There have been a lot of questions about how cloud brightening would impact precipitation patterns and ocean circulation.

The other option is to put particles into the stratosphere. You wouldn't need very many, and, unlike the particles that come out of coal plants, they go way up high in the stratosphere, so we wouldn’t breathe them in. It would have a global effect by reflecting the sunlight away from the whole planet. This would be done by using a high-altitude aircraft that can get up to about 50,000 to 60,000 feet -- though the National Academy of Science has talked about using artillery shells, and there's also the possibility of using Kevlar tubes held aloft by hot air balloons, which I think is more implausible.

The sun-blocking technologies are much cheaper to deploy, and much more politically fraught than other kinds of geoengineering. They can be put up pretty quickly, work instantly, but they have all kinds of regulatory governance complications. One very rich person or one state can in theory put particles in the air, so the question becomes, how do you prevent an individual actor from doing something like that?

And then there's the option of dumping iron in the ocean.

A couple of decades ago people discovered that there are deserts in the ocean. If you dump iron into these areas, you can very quickly stimulate the growth of plankton. The theory is that plankton sucks up the carbon off surface waters and when it dies and gets eaten and drifts down, the carbon is sequestered.

There's a company called Planktos out in the Bay Area that made a lot of headlines a few years ago by trying to do this on their own. The idea was to sell carbon credits on the carbon market, so there was this essentially rogue ship dumping iron into the ocean. But it raises questions about how much carbon actually makes it down to the deep ocean and is sequestered -- and how this is going to be regulated.

One of the reasons people might be skeptical about geoengineering is because, I think, in the wake of the Cold War, a lot of people have become disillusioned about the idea of using technology to save the world.

We have a long history of technological hubris and overreaching. [Cold War nuclear physicist] Edward Teller, for example, had the idea of using nuclear bombs to carve out harbors in Alaska. Geoengineering also goes against the reigning gestalt for how we solve the climate problem, which is individual action. It's the opposite of "No Impact Man." It's big impact humanity. It seems like a crazy notion that humans would hope to control the climate, this enormous chaotic system that we have no hope of actually getting control over.

I think one of the most important things about geoengineering is that it forces us to have a conversation about our civilization's impact on the planet and what kind of world we want to live in. That is, after all, what we're doing when we decide how much carbon we want to cut. If we decide to cut 80 percent by 2050, for example, we're deciding what kind of climate we want, and geoengineering makes that explicit.

Geoengineering, in some ways, runs counter to a deeper American philosophy -- it's not about self-betterment through individual action, it's about big-picture thinking.

It doesn't fit into this self-improvement every-man-can-change-the-world philosophy, but on the other hand it plays into a couple of undercurrents of American life: apathy and our love of a quick fix. We've shown no interest in giving up our comfortable lifestyle in dealing with this problem of the melting planet, and American popular culture shows our love of quick fixes like Viagra or diet pills. Geoengineering appeals to those ideas: We don't really have to change our lives, we can just throw up some particles into the sky. And this is wrong, wrong, wrong!

A conversation about geoengineering only makes sense in the context of underscoring the need to cut emissions. One of the political problems of geoengineering is that it will be sold by people as a band-aid or a quick fix, and undercut whatever slight momentum there may be for cutting greenhouse gas emission.

Why isn't it a quick fix?

Cooling the temperature is not the same as reducing the CO2 in the atmosphere. One of the problems of allowing CO2 to continue to accumulate is ocean acidification. The ocean is the biggest reservoir of CO2 and as we continue to add it to the atmosphere, more and more CO2 is being pushed into the ocean. We're finding more and more that acidification has serious impact on ocean life -- especially on the small shellfish and other creatures at the bottom of the food chain -- and could trigger a potential collapse of the food chain.

When it comes to putting particles into the atmosphere, there's also the Sword of Damocles problem. Those particles only last in the atmosphere for about a year before they naturally fall out, so you need to replenish them. If the CO2 has continued to accumulate and those particles aren't replenished it would be like closing an umbrella on a hot day. Once we go down this road we're really committing ourselves to it.

As you write in the book, however, there's actually something quite noble and beautiful about the idea of using this technology to manipulate our climate.

The instinctive reaction to the idea of geoengineering is that we're messing with nature -- not only interfering with something we don't understand, but messing up something really beautiful. Remember, putting sulfur particles in the sky will change its color. So you wonder, how would you feel about living under a slightly differently colored sky? Will you look up at a cloud and wonder if it was made by nature or some engineer? There's this idea that we're going to find ourselves living in a completely artificial environment, like a terrarium.

But I began to see there was something quite profound and beautiful in this kind of human partnership with nature. One of the things we have to grasp is that we mess with nature all the time, and it doesn't necessarily take away at all from its mystery and beauty. A cloud can be just as beautiful and strange and interesting if it's blown in by the wind or if an engineer had a hand in creating it. The biggest danger we face now is not ecological hubris, it's apathy -- the notion that nature is out there, beyond the human realm, is very damaging. We have no choice now but to have an active relationship with nature. There's no other way. We're doing it already, and we have to become better at it and more conscious of it.