The hypocrisy of the green-living bullies

Activists are guilt-tripping me about my food choices -- but the fact is, I'm just too poor to do what they say 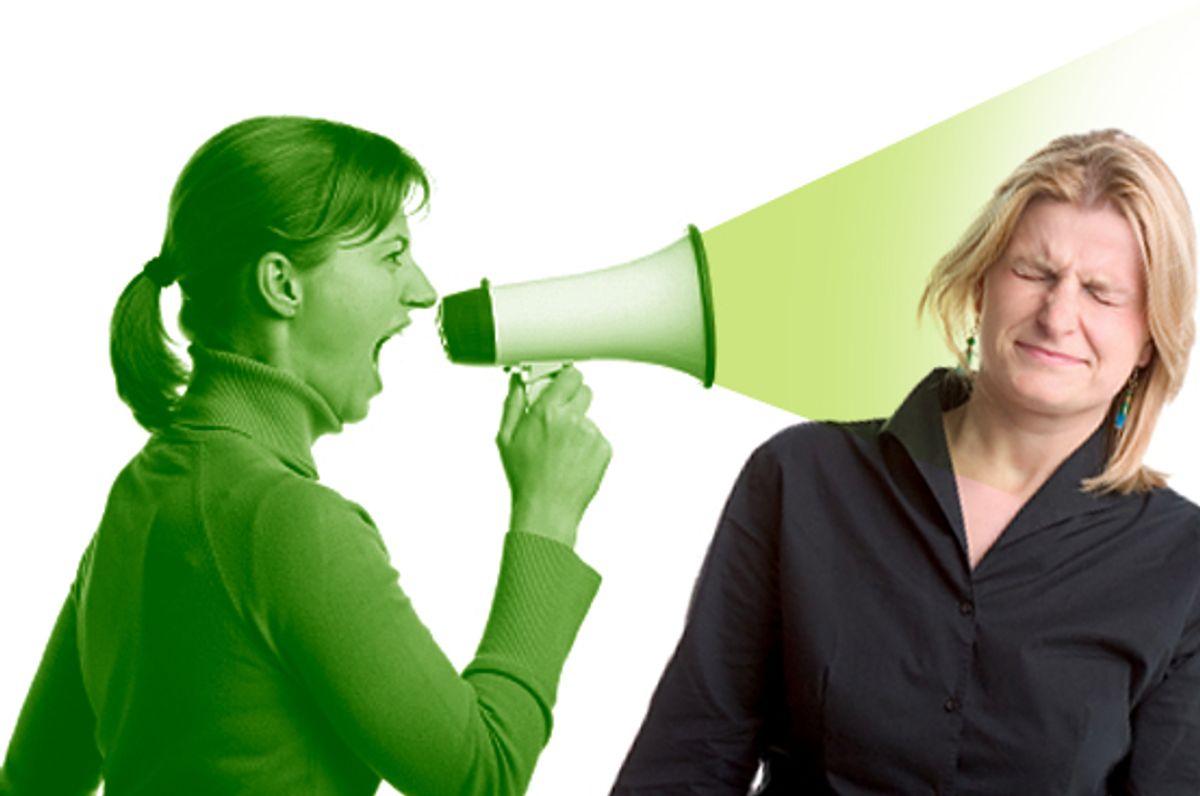 Young woman shouting at another woman through a megaphone (Mateusz Zagorski)
--

A version of this post initially appeared on Ann Nichols' Open Salon blog.

As a lefty/crunchy granola/pop-culture influenced foodie type, I am well aware that "green is the word." I read Michael Pollan, Russ Parsons and Barbara Kingsolver. I watch the network entirely devoted to all things green, from Ed Begley Jr. installing solar panels and a rain barrel to Emeril teaching the clueless how to cook entire meals using only the vegetable section of Whole Foods. I've seen "Food, Inc." and "King Corn." I recycle, I repurpose, I always try to buy local, I shop at the farmers market, I covet the Prius, I make my own non-toxic cleaning products, and I just started composting. I am a (good) home cook, and prepare meals from scratch seven nights out of seven. Conceptually I am in. Way, way in.

Here's the thing, though. It is very, very expensive to be green. The only eco-friendly things that I do that actually save money are making my own cleaning products, using cloth rags and napkins instead of buying paper, and using energy-efficient light bulbs. It may be TMI, but I will tell you that money is very tight around here these days, as it is for many people. I have a grocery budget, it is fixed, and I have, for years, been using the weapons of sales circulars, meticulous list, menu planning and creative cooking to make the money stretch to feed a big carnivore and a growing boy.

We don't have a Whole Foods in these parts, but I hear from my more urban friends that there is a high price to be paid for all of that fresh, organic wonderfulness. I know firsthand that the small selection of organic produce available at our grocery store, the local health food store and the food co-op is much more expensive than "regular" produce at my grocery store, and that I pay farmers at the market at least 10 percent more per item than I would pay at said grocery.

During the growing season here, as cash flow allows, I buy all of my weekly produce at the farmers market. I love everything about it, from the contact with the farmers to the knowledge that my family is supporting local agriculture. (Plus, the food tastes better.) When cash flow doesn't allow (and in the eight or nine months during which there is no local produce), I buy my eggplants, zucchini, onions and peppers at the large grocery store where I buy everything else. Because we live in farm country, much of what I purchase at the grocery store in the summer is locally grown. I still feel guilty.

I continue to feel guilty when I do not buy the line of grass-fed beef or free-range chicken sold at our grocery store because it is TWICE AS MUCH as the chemical-fed, tortured, ill-used animal protein I feed my family. I would, left to my own devices, solve that problem by being a vegetarian (I used to be). Neither my husband nor my son is willing to give up meat, and I am forever playing chicken (no pun intended) to see how small a quantity of animal protein I can put in our meals before they notice and complain. We have at least one meatless meal a week, usually two. What I cannot do is spend $7 a pound on chicken instead of $3.69, thus diverting dollars that are needed to buy other things.

The nervous tic near my right eye starts to twitch when I read statements by food pundits about how we are not used to paying what food is really worth, and we have become used to a McDonald's and Walmart pricing system that makes us shocked at the prices of food that is produced in ways that are humane and earth-friendly. It's undoubtedly true, but the reality is that I am a person working to balance a tight budget and a perpetually starving, adolescent son. My first duty is to provide abundant, healthy food for my child. If, to quote the Barenaked Ladies, "I had a million dollars," I would be all over the grass-fed beef, the locally grown produce and the hormone-free milk. Until then, I buy what I can afford. And feel guilty.

The point of this rant, I guess, is that it is very easy to preach about the value of the grass-fed, the solar, the phosphate-free and the organic when you are in a position to afford it all -- or willing to decide for yourself that you can live without cars, meat or a washing machine. My mother has wisely reminded me that much of the preaching is not directed at me; I already know and understand ecological "best practices," and implement them as often as possible. The fact that I feel guilty when I make the choices I have to make is really my own issue.

What about the people who have less money than I do, though? What about the people who buy food from the dollar menu at McDonald's because they lack the time and skills to spend the same amount on a roasting chicken, new potatoes and fresh aspragaus? What about the people who might save money if they drove a Prius, or installed solar panels, but who lack the funds? Is "being green" realistically the province only of the well-heeled and the folks whose lifestyles allow them to leave the grid completely? Maybe, until such time as the economic playing field is equalled a bit, there should be less bully pulpit and more compassion and assistance. I don't honestly know whether that leveling is the role of government, the market, or both.

It will be a beautiful day when green choices are similar in cost to less green choices. I am deadly, earnest serious that I would be proud and happy to live in such a world. Until then, I can live without affluent and/or single-minded greenazis looking down their noses at those of us who still shop at regular grocery stores, drive gas-burning vehicles and commit various other sins against the environment as if we were intentionally throttling Mother Nature with our bare (chemically tainted) hands. I'm betting that my IQ and social consciousness are a good match for the best of them; all they have that I don't is enough money to make payments on a Prius and spend $7 on organic dishwasher soap.