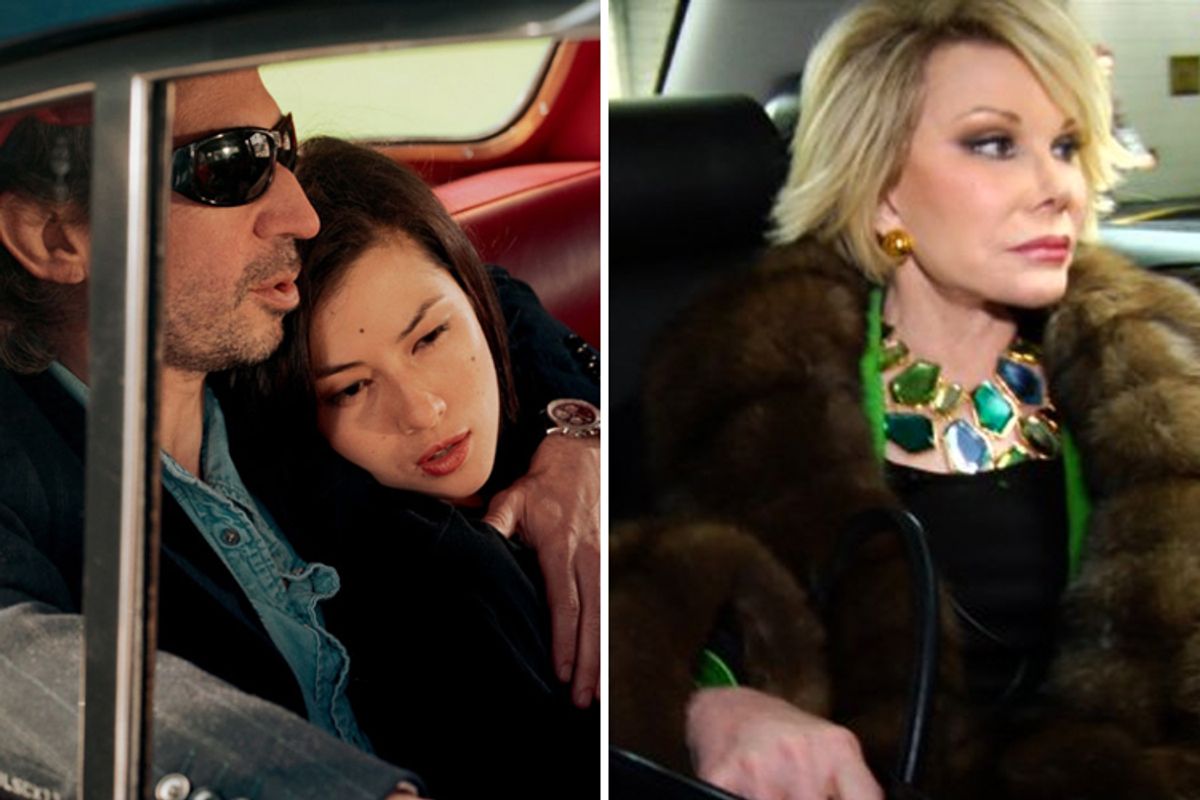 Eric Elmosnino and Deborah Grall in "Gainsbourg, Je t'Aime ... Moi Non Plus," and Joan Rivers in "Joan Rivers: A Piece of Work."
--

When the Tribeca Film Festival was launched in 2002, co-founders Robert De Niro, Jane Rosenthal and Craig Hatkoff talked a good game about rebuilding downtown Manhattan in the wake of the 9/11 attacks. As has been documented here and elsewhere, they clearly had a business objective in mind as well. Their initial goal -- to build a New York spring film festival on a global par with Cannes, Sundance, Berlin and Venice -- has clearly not been reached. On balance, I don't think that's a bad thing.

Now in its ninth year, Tribeca has something it lacked for many of its first eight: an identity. Granted, it's a miscellaneous identity, and Tribeca isn't the world's greatest festival in any of its categories (except perhaps its ESPN tie-in sports film festival, an ingenious and successful enterprise). But TFF has become a major spring cultural event for New Yorkers and tourists precisely through its variety. Once again this year, head programmer David Kwok offers a couple of big-ticket premieres ("Shrek Forever After," the opening gala, and the anthology documentary "Freakonomics" as the festival-closer), a smattering of American independent films that either did or didn't play Sundance, a strong documentary lineup, and a cherry-picked list of intriguing foreign films that even Manhattanites may never get another chance to see.

In the wake of former artistic director Peter Scarlet's departure last year (and the arrival of longtime Sundance head Geoff Gilmore, in a newly created executive role), TFF may skew a bit less art-housey and a bit more Amerindie this year, in my thoroughly unscientific analysis. But that's just frosting on the cake, which remains large and flavorsome enough to appeal to almost any moviegoer. Here are my preliminary picks for should-see, could-see and must-see Tribeca flicks, drawn from both narrative features and documentaries -- especially since those categories have become so blurry of late -- and arranged alphabetically.

I've left out a few newsworthy movies that will be opening theatrically in short order, including "Freakonomics," the Shrek sequel, and Nicole Holofcener's "Please Give," which I covered at Sundance (and will discuss further next week). I also haven't included Alex Gibney's work-in-progress screening of his documentary about disgraced New York ex-governor Eliot Spitzer, another film I hope to cover in depth down the line. Standard disclaimers about festival previews apply: Some of these films I've seen, some I've seen snippets of and some I haven't seen at all. I reserve the right to change my mind many times over.

This year Tribeca is pioneering a couple of intriguing (and inevitable) moves that bring at least some aspects of the festival experience out of Manhattan and onto people's laptops and TV sets, wherever they may be. Eight features and a passel of short films will stream online during the festival as part of TFF Virtual, and several more features from the 2010 and 2009 festivals will be available on-demand through Tribeca Film, a distribution venture available through many cable systems and other purchase platforms like Amazon and Vudu. I haven't checked out the streaming quality or user experience of any of these options -- let me know if you give them a try. Sundance tried some similar endeavors this year, and I guarantee we'll see a lot more of this.

The Arbor An intriguingly blurred and dark quasi-documentary portrait of working-class English playwright Andrea Dunbar, who died in 1990 at age 29. Shot in and around the eponymous housing project where Dunbar grew up, with reenactments from her plays, actors reading interviews with real people, etc.

The Disappearance of Alice Creed An unconventional psychological thriller from young English director J Blakeson that follows the kidnapping of a millionaire's daughter by a couple of hoods looking for the big score. Things don't go quite as they planned.

Dream Home Real estate is indeed a form of violence, and in this penthouse-deal-gone-wrong horror flick from Hong Kong director Pang Ho-cheung, it becomes a Grand Guignol blood bath with overtones of social criticism.

Into Eternity A chilling documentary that explores Finland's effort to build a "tomb" for nuclear waste three miles beneath the earth -- and mark it in such a way that no one will open it for at least 100,000 years.

Joan Rivers -- A Piece of Work I resisted seeing this at Sundance; am I supposed to warm to the humanity of one of the most bilious and mean-spirited people in showbiz history? But Rivers apparently opens up to filmmakers Ricki Stern and Annie Sundberg, with riveting results.

The Killer Inside Me Jim Thompson's genre-defining noir novel gets a slow-burn treatment from Anglo director Michael Winterbottom, and the result was praised by some Sundance critics as a masterpiece. Some audience members walked out on the relentless violence, however, or derided the film as sexist trash. (I still haven't seen it and shame on me.)

Lola Two elderly Manila women face the consequences of a crime involving their grandsons -- one is the murder victim, another the possible murderer -- in the latest lo-fi drama from masterful Filipino realist Brillante Mendoza (for my money one of the great cinematic discoveries of the last decade).

The Lottery This heart-wrenching doc on the lottery system that governs admission to New York's nationally renowned Harlem Success Academy is inarguably one-sided, but poses crucial questions about the rapidly spreading charter-school movement and its role in educational reform. A must for parents.

Micmacs Love him or hate him, "Amélie" and "Delicatessen" director Jean-Pierre Jeunet is one of contemporary film's great tinkerers and inventors. This new slapstick adventure unites him with French comic Dany Boon, a huge star at home but relatively unknown Stateside.

My Trip to Al-Qaeda Journalist and author Lawrence Wright's thoughtful one-man performance on the rise of fundamentalist Islam and his own attempts to understand it comes to the screen, directed by Oscar-winning documentarian Alex Gibney. One of Tribeca's hottest tickets this year.

Possessed Much-buzzed atmospheric horror film from Korean writer-director Lee Yong-ju follows a college student who returns home after her sister's disappearance to find her mother an ultra-religious convert and the neighbors dying grotesque deaths. With the help of a hard-boiled cop, our heroine's got to put together the increasingly disturbing pieces. (Also available online through TFF Virtual.)

Sons of Perdition For obvious reasons, teenage boys aren't wanted in the polygamist community founded by breakaway Mormon "prophet" Warren Jeffs (who is currently incarcerated as a rapist). Documentarians Tyler Measom and Jennilyn Merten follow the exiled boys and young men -- most of them literally Jeffs' sons -- as they struggle to adjust to life in mainstream society.

Soul Kitchen Award-winning Turkish-German director Fatih Akin ("The Edge of Heaven") shows his lighter side with this rich and colorful restaurant comedy focused on a downscale Hamburg eatery and its beleaguered Greek immigrant proprietor.

The Two Escobars This fascinating doc from fraternal filmmakers Jeff and Michael Zimbalist -- part of Tribeca's ESPN-linked sports film fest -- traces the linked careers of Andres and Pablo Escobar, two unrelated men with the same name from the same Colombian city. One became a famous and then notorious soccer star, while the other became a legendary drug lord. As the Zimbalists' film makes clear, the lives and deaths of both Escobars were almost mystically connected.

Vidal Sassoon the Movie I'm feeling pretty maxed out on documentaries about fashion icons, and haven't included the film about Halston that's also premiering at Tribeca. (I'm sure someone is shooting a Tommy Hilfiger movie right now, and I'll pass.) But first-time director Craig Teper's super-stylized portrait of Sassoon, the "hairstyle modernist" who was raised in a Jewish orphanage in London, sounds irresistible.

Zonad It's utter and complete silliness from Irish writer-director brothers John and Kieran Carney (John was the director of "Once") as a beefy, red-clad, horndog alien arrives in the beyond-stereotypical backwater village of Ballymoran. Actually, Zonad is no alien, and Ballymoran seems to have time-traveled out of a '50s sitcom. The Carneys' endlessly goofy film spoofs Irish small-town life, movies about Irish small-town life, cops, sexuality, alcoholism and, most of all, itself.