The New York Times this morning publishes a very favorable article examining the judicial record and attributes of Diane Wood.  Written by Sheryl Gay Stolberg, it highlights what I documented at length here on Monday:  that Wood is one of the very few judges in the country able to be both a strong and principled advocate for legal and Constitutional principles while finding ways to persuade very conservative judges to join her opinions and maintain constructive professional and personal relationships with them.  This uniformly positive NYT profile can only help Wood's candidacy and underscores a glaring irony:  the "justification" offered for choosing a blank slate or "centrist" nominee such as Elena Kagan -- namely, that it is vital that Stevens' replacement be able to forge consensus with right-wing judges -- is, in fact, one of the most compelling reasons for choosing Diane Wood, because, unlike the other "short list" candidates, that's something that she's actually been doing, in reality, for 15 years now (Kevin Drum has more thoughts along those lines).

Meanwhile, NPR's Nina Totenberg filed a report yesterday on the Supreme Court's decision this week in U.S. v. Stevens, which, by an 8-1 vote (Alito dissenting), struck down a 1999 Congressional statute which banned the sale and distribution of videos depicting animal cruelty.  The Court, over the vehement objections of the Obama administration and Solicitor General Kagan, found the statute to be in violation of the free speech clause of the First Amendment because it went far beyond its stated intent -- to ban despicable "crush videos" (where animals are crushed to death on video by women's heels and feet for the sexual pleasure of those purchasing the videos) -- and instead encompassed a whole litany of clearly protected speech.  Totenberg suggested that the radical position regarding the Government's power to restrict free speech taken by Kagan contributed to the Government's defeat:

Today's decision not only struck down a law enacted by Congress, it delivered a rather pointed rebuke to two individuals, as well: first the Obama administration's Solicitor General Elena Kagan, a top contender for the U.S. Supreme Court, whose brief on behalf of the administration was thoroughly repudiated in the strongest terms. . . .

The issue isn't that she lost; even the greatest lawyers lose in court sometimes.  The issue is that, in defending the constitutionality of this statute, Kagan chose to advocate a position on the First Amendment so restrictive and extremist that it clearly seemed to offend both the conservative and liberal factions on the Court.  It drove 8 Justices together to strike down the statute because -- as a result of the arguments made by Kagan -- they perceived the sweeping law as a genuine threat to the First Amendment.  In essence, the Government's brief signed by Kagan literally argued -- notwithstanding the First Amendment's clear prohibition on laws "abridging the freedom of speech" -- that the Government is free to criminalize ideas whose "societal costs" clearly outweigh their value.  From Kagan's Brief:

This is the argument which the 8-Justice majority found so alarming and repellent.  Here's how Chief Justice Roberts put it in his majority opinion striking down the law, an opinion which was joined by all of the Court's "liberal" Justices (Ginsburg, Breyer, Stevens and Sotomayor).  After quoting the first sentence of the above-excerpted passage from Kagan's brief, Roberts wrote: 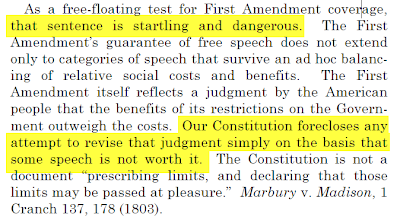 That's some rather stark language for an 8-Justice bloc on the Court to use to describe the Government's position ("startling and dangerous"), and rightly so:  vesting the Government with that power (to ban the expression of an idea whenever its costs "clearly outweigh" its value)  would completely eviscerate the free speech clause.  It's certainly possible (probably likely) that the Court would have struck down the animal cruelty law even had Kagan not advanced this extremist position, but, at best, it was a fairly significant tactical mistake.  The far stronger defense of the law that was adopted by Alito -- i.e. the statute could and should be narrowly construed so as to ban only the targeted crush videos -- did not remotely require such a radically restrictive First Amendment position.

By advocating it, Kagan allowed the Court, horrified by that position, to unite by wrapping itself in the First Amendment flag and largely avoid grappling with the more difficult statutory questions raised by the appeal.  That's why Totenberg quoted a lawyer for the Cato Institute, which argued for the statute's overturning, as saying that the Government's Brief "does seem to raise questions about [Kagan's] judgment" -- not because he disagreed with the position Kagan took (since he's from CATO, that would hold little sway for progressives), but rather, because it was tactically foolish and counter-productive for her to advocate it.

All of this serves to further highlight what a huge risk (at best) a Kagan appointment to the Court will be.  Aside from the fact that Obama supporters who cheer for a Kagan selection will be doing so without having the slightest idea what she thinks or believes about Constitutional and judicial matters, there is also a serious question about how effective she would be on the Court.  It isn't just that Kagan has never been a judge; I don't believe only judges should be appointed to the Court.  It's far worse than that.  As the veteran litigator bmaz documented last week at Marcy Wheeler's blog, Kagan has never even practiced or appeared in any courts prior to becoming Solicitor General a little more than a year ago:

I appeared in three different courthouses last Friday. Which is two more than Elena Kagan has appeared in as either an attorney or judge during her entire legal career.  Her first appearance in the Supreme Court as Solicitor General, little more than six months ago, was the first time she had substantively appeared in any court.  Ever.  You can still count her total number of live court experiences (all appellate arguments) on one hand.  The complete absence of experience and seasoning showed in several key areas in Kagan’s uneven oral argument presentations, and the claim Kagan is some kind of wonderful talent who necessarily would bring diverse Supreme Court justices together exposed as unsupported fawning fantasy.

Kagan is not only a huge risk in terms of her beliefs and judicial philosophy, but also in terms of her ability to be an effective Justice on the Supreme Court.  How could that not be the case?  The glowing NYT profile this morning on Diane Wood's abilities only underscores the reasons progressives should find a Kagan selection totally unacceptable.  The White House is now anonymously stating that because it knows the Republicans will attack its nominee no matter who it is, Obama does not intend to be "cautious" with the pick but instead will "choose whomever he pleases."  A Kagan choice, then, would reflect quite negatively on Obama in countless ways.

UPDATE:  I believe I was clear about this, but just in case:  I'm not holding the substance of Kagan's First Amendment position against her, as odious as I find that position to be.  As Solicitor General, she's the Supreme Court lawyer for the Government, and like all lawyers, she's obligated to raise all reasonable arguments which she believes will help her client win.  It's unfair to assume that legal arguments she advocates as Solicitor General represent what she believes or how she will rule as a judge.  The issue is her judgment in raising this position and the underlying lack of experience and record she has in terms of assessing her likely effectiveness on the Court.

UPDATE II:  Scott Lemeiux today publishes his excellent "Case for Diane Wood."  Scott says that his piece was originally meant to be published in The American Prospect, but they decided not to go forward once I published mine (right as Scott was finalizing his piece), because I made very similar arguments to the ones Scott was preparing to make.  I'm not sure why that should have stopped them; it certainly didn't stop The New York Times.  In any event, Scott's piece -- which he posted today on his blog -- is very well done, persuasive, and well worth reading.

UPDATE III:  Duke Law Professor Guy-Uriel Charles takes a very critical (and smart) look at Elana Kagan and asks some excellent questions.  I don't want to summarize or excerpt any of it because it's worth reading in its entirety.